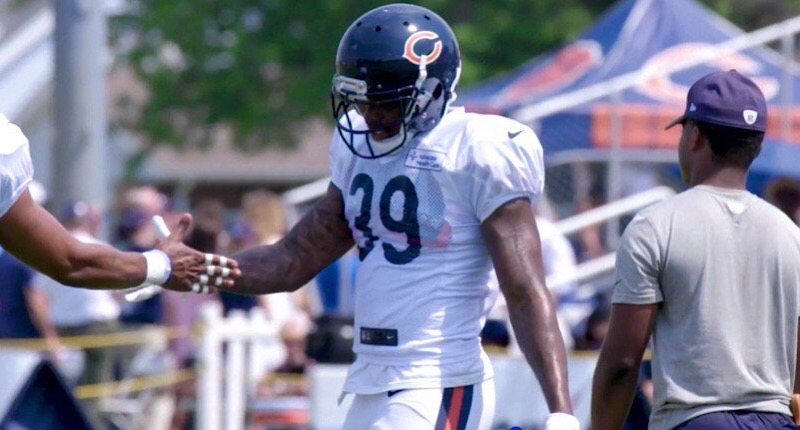 Today’s highs in Chicago are expected to be in the 70s. I strongly encourage you to step outside your house, breathe in some fresh air, and let the sun rays touch your skin if your schedule allows you to do so. But I share this encouragement with the caveat of stepping outside responsibly and not doing something you will regret later.

•   The new guys on the Bears now have numbers:

•   The following is a series of random thoughts on a collection of numbers.

•   Jaylon Johnson has big shoes to fill in wearing Peanut Tillman’s 33. And no, I’m not going to read too much into that number being worn last year by Bears draft pick Duke Shelley. Nope. Sure won’t.

•   I’m not sure anyone should wear 99 again. Part of it is because Dan Hampton wore it so well during his Hall of Fame career. But also, the number might be cursed. To be clear, I’m not a believer in curses, jinxes, or any of that stuff. But when I think of modern 99s, I think of Lamarr Houston tearing his ACL on a sack of Jimmy Garoppolo in a blowout loss against the Patriots, as well as Shea McClellin, whose Bears career started with him wearing 99 before transitioning to 50. Two epic numbers in Bears history worn by the same disappointing player. That still stings.

•   Shouldn’t 46 be retired too? I mean, Doug Plank’s number was the inspiration for naming the best defense of all-time. Just saying … that number probably shouldn’t be re-issued

•   FYI: Betting the under is for cowards:

Are you taking the over or the under?https://t.co/BuNMRnuSAq

•   And yes, I realize the value last year was in the Bears “UNDER” in wins. Because of that, I stayed away from wagering on the Bears’ win total. HOWEVER, a drop in the line means there is value on the other side. So much went wrong for the Bears last year — injuries, inadequate quarterback play, turnover luck, etc. — that it’s easy to envision the pendulum swinging back in Chicago’s favor in a couple of areas and putting them above .500. It shouldn’t take a lot.

Heading into the weekend with some post-draft 2020 defensive Unit Grades. #ClayProjections pic.twitter.com/w4JsoEFD4T

•   I’ll admit to my biases, but an Eddie Jackson-Tashaun Gipson safety tag team being ranked in the bottom third of the league doesn’t look right to me. Sure, the Bears still have a defense that ranks in the top third of the league by this grouping of metrics, but there’s something that doesn’t sit well with me about the projection that Chicago’s safety tandem is problematic.

•   HEAR ME OUT … what if the solution to the Bears’ tight end problem all along was putting Khalil Mack out there?

People forget that @JJWatt not only started his college career at @CMU_Football… but he also played an entirely different position than DL. pic.twitter.com/4bDQ46vTHp

•   I shared some thoughts on the current state of the Bears’ tight end position (sans Mack):

A week ago today, the @ChicagoBears drafted Cole Kmet — whose presence immediately makes the TEs Room much better than it was before his arrival. pic.twitter.com/a4hnzfJKYc

If Jimmy Graham can play like he did in the playoffs. And Cole Kmet can scratch the surface of his potential as a rookie, then the Bears will be cooking.

Another move for Tom Brady’s Bucs, who were awarded kicker Elliott Fry off waivers from the Carolina Panthers.

•   I’d like to take some time to pass along my condolences to Ryan Wetnight’s family, friends, fans, and others in the wake of the news of his passing. May everyone find peace in these trying times:

Our hearts are heavy with the news of former Bears TE Ryan Wetnight's passing after a courageous battle with cancer. Our thoughts go out to his family, friends & loved ones. pic.twitter.com/5AcKD18WUL

•   I’m going to fight Michael over his mascot rankings:

The Final Definitive Rankings of Every MLB Mascothttps://t.co/cilYYXy9AT

•   New Bulls GM Marc Eversley had some interesting stuff to say in his introductory conference call: