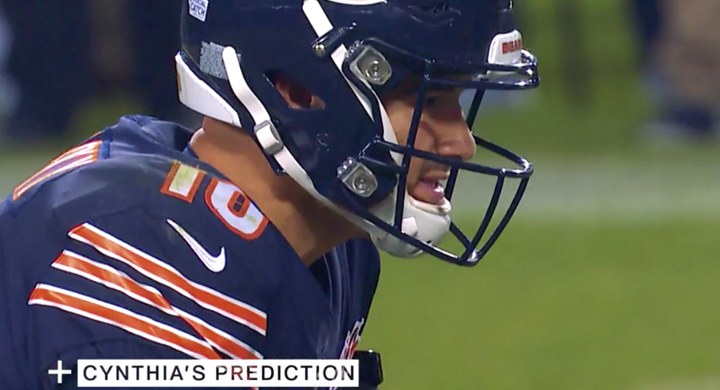 I’m envious of friends who powered through all 11 “Star Wars” movies on May 4 (Michael: Is there even enough time in the day for that?!). Instead, I’m traveling a more meticulous route by watching one movie every night, accompanying it with a tweet thread. Positive vibes, mostly.

Oh, and if you want to watch all the Star Wars movies, you can sign up for a free trial with Disney+, which also supports Bleacher Nation in the process! Please consider trying it out, if only for the free trial. It helps us keep the lights on around here. Much love.

•   NFL Network analyst Cynthia Frelund is deep in the analytics game. To say her work is outstanding would be underselling it. With that in mind, I wanted to take some time to share her (admittedly) way-too-early team win projections:

•   Unlike some projections, Frelund’s work unique because each matchup is simulated 100,000 times. So this is a thorough attempt at putting together an outlook for the year to come, even if it is a tad bit early for some.

•   With that said, she has thoughts: “Quarterback play is a huge factor in my model,” Frelund explains. “And in the case of the Chicago Bears, it could shift their current projection of 7.9 wins.” Only 7.9 wins for the Bears, eh? That puts them behind the Vikings (9.0) and Packers (8.8), who are both projected to be a tier ahead of the Bears at this time. This projection is based on Frelund using a 50-50 playing time split between Mitch Trubisky and Nick Foles. It will be worth checking out as the season nears to see if one quarterback has a clear edge over the other, and if that will sway the projected win totals one way or another.

•   As a believer in the old adage “it’s not who you play, but when you play them, I am looking forward to seeing how the schedule rolls out for the Bears. ICYMI: Some early leaks have already surfaced.

•   The oddsmakers in Vegas have a different formula that sets their win totals. And this update has the Bears at 8 wins. You can check out the rest from SuperBook VP of Risk Management Jeff Sherman here:

•   And at even money on the OVER, I’ll gladly take the Bears winning at least 9 games in 2020. And since I’m going that far, I’d be willing to throw some change at the Bears +150 at making the playoffs. The last time oddsmakers thought this highly of the Bears’ odds, they won the division as a long-shot, cleared the OVER/UNDER win total with ease, and made the postseason. It was a good year for me at the window. Seeing these numbers makes me want to get back out there when given the green light to do so.

•   This is where college football gets it right. Early season non-conference games (highlighted by showdowns that have national appeal) followed games against similarly ranked teams, backed up by an early round of divisional rivalry games, and topped off with the biggest divisional rivals is sensible and could be exciting to watch. Just like we all tune in for the big late-season showdowns between Alabama-Auburn, Michigan-Ohio State, Florida State-Florida, and games of that nature, I’d bet dollars to donuts that NFL ratings would be sky high for late-season divisional grudge-matches like Bears-Packers, Raiders-Chiefs, Cowboys-Eagles, Steelers-Ravens, etc. As far as I’m concerned, this is a missed opportunity for the NFL.

•   In case you missed it: The Bears are moving forward with ticket sales for 2020, which are set to begin tonight.

•   I don’t know if we’ll see Alex Smith play professional football again, but I can’t help but admire tge heart, determination, and guts it takes to be doing these workouts after seeing that injury and the after-effects. Here’s a reminder that you can totally push through the day: