I Wonder if Anthony Miller is Learning Something from the G.O.A.T. and Other Bears Bullets Skip to content 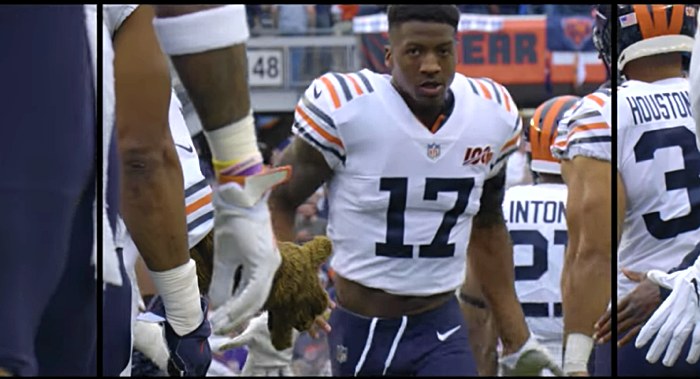 Jeri’s Diner in Lincoln Square was a lot of things to different people.

Heck, it was a lot of different things to me.

It was there for me after late nights with friends, and early morning with my mother. It was there at the end of long road trips, as well as the starting point of some incredible journeys. I’ll always remember it as the final stop of my post-World Series celebration tour after the Cubs won it all in 2016. A cheeseburger with a fried egg on it and a chocolate shake was my favorite thing to get, and at some ungodly hour as the sun was about to rise, it was the perfect meal to end the day. So to read that it’s now closing hurt so much this morning. Support your local businesses while you can.

•   Anthony Miller gets it:

•   I didn’t wake up this morning thinking I would want to get into the G.O.A.T. debate, but I can’t help but love how the generation that followed me is watching “The Last Dance” with a fresh set of eyes and pulling worthwhile stuff from it. That’s what a well-done documentary is supposed to do. Keep learning, young fella. Bonus points if you can apply what you learned from watching to your trade.

•   Miller’s tweet has me thinking about how the 2020 Bears are approaching this offseason. That Miller sees what Jordan put in after defeat has me hopeful. If they take that same work ethic to the bank, then we’re in for a heck of a Bears season. Like the 1995 Bulls, the 2019 Bears were talented. But also like the 1995 Bulls, the 2019 Bears were flawed in an important area to the point they were unable to make up for it elsewhere. The difference is that the 1995 Bulls added a future Hall of Fame talent to fill the void, while the Bears addressed their top issue in 2019 by creating a competition to fill the void in 2020. So much for apples-to-apples. But the core concept of learning from your darkest hour still exists.

•   As far as I’m concerned, what makes Michael Jordan “The Dude” is not that just he lost and then won, but how he (and his teams) responded after losing in the first plcae. It takes some real cojones to get knocked down the way he did to come back bigger and stronger. Ultimately, there’s value in losing, learning from your mistakes, and coming back better when called upon.

•   Danny Heifetz (The Ringer) on what fifth-year option decisions told us about how NFL teams felt about their 2017 drafts: “The Chiefs, Texans, and Steelers have plenty to celebrate. The Bears … not so much.” Ouch.

•   Gonna take some time out of my day to give this a listen later:

So did the #Bears talk to Deshaun Watson or didn't they? @JJStankevitz @KingsleyEllis and @AdamHoge try to sort through all the mixed messaging on the latest Under Center Podcast 🎧

Can’t believe the rookies pulled this off 😂 #NFLDraft pic.twitter.com/UEviq1L3lT

Player to be First Overall Selection:

•   Is it bold? Absolutely. But all it takes is one NFL GM to say to themselves “I don’t want to pass on the next Carson Wentz” to make it happen.

•   The Bears – and in this particular instance, we’re talking about Jim McMahon – were goofy as heck in the 1980s:

•   I don’t think this tweet is going to age well, Darren:

This is how it’s done:

2. All players will sign. (They already get CTE with near certainty).

3. Players who test positive stay out for 2 weeks. https://t.co/mTNlsXjtAt

•   On the other side of the coin, Peter King’s FMIA post informative and entertaining. Clear some time I your schedule and give it a read if you get an opportunity to do so. (Ed. note: If you want to skip past the COVID stuff, I get it. The Don Shula section is great if you’re a football die-hard.)

•   Some things are bigger than football:

Bears linebacker Joel Iyiegbuniwe has special gratitude for one person during National Nurses Week — his mom Abiola, who inspires his ideas of a post-NFL career in medicine.@ChiTribKane's story on a Bear and his mom. https://t.co/ZQAf8D134C

•   Brett found this “style” section at Amazon with sneakers … and yeah, there are a lot of pretty darn stylish looking sneakers. Among the available kicks are some Grant Hill FILAs, which has me thinking about how certain guys ended up with particular brands. The sneaker game is no joke.

•   I wanted to take a moment to thank those of you who follow us on Twitter. There are 23,000 of you who have clicked that follow button and are still hanging around. Thanks for being there.