A Uniform Makeover, Trubisky's Tough Offseason, Mic'd Up A-Rob, and Other Bears Bullets Skip to content 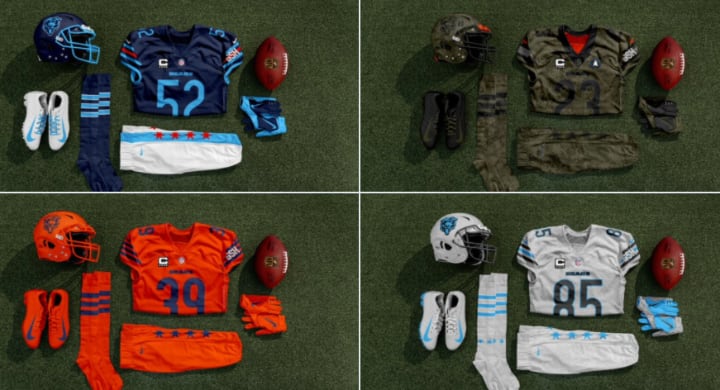 I’m trying my best to carve out more time outside as the weather begins to cooperate. It’s not that I want to do a whole bunch of things … I just like being outside.

I felt the need to get out of the house and walk around the neighborhood, but do so without the intent of doing anything. Circled back around to the house and this flower in my yard caught my eye. pic.twitter.com/vDfzc69aLl

The detail that new iPhones provide in photos is something else. Eleven years ago, my Blackberry would’ve given us a grainy flower image that would’ve left me like “meh.”

•   A traditionalist at heart, I’m hesitant to make any changes to the Chicago Bears’ uniforms. Finding something better than the classics is hard to do (that’s why they’re classic!). But some of these designs from @Cgersk on Twitter are eye-opening:

•   Which ones are your favorite? Sound off in the comments.

•   I’m a sucker for the “Lake Effect” City Edition. The colors of Chicago’s flag on the city’s football team’s apparel hits home. The orange “Color Rush” concept is unique, too. It stands out for the right reasons.

•   The Bears already have a bunch of good uniform concepts littered throughout their history, so I wouldn’t want them to go too far off the board if they were to add to their collection. Traditional home and road uniforms, alternate orange tops to be worn around Halloween, the white-on-white road set, the vintage white tops from last year, and the navy tops with the big, orange block numbers. I’m cool with all those being in regular rotation. And while there is nothing wrong with something fresh, sometimes keeping it simple is the best course.

•   It’s been a rough offseason for Mitch Trubisky. After having a major setback season in Year 3 after making the Pro Bowl as an alternate as a second-year player, Trubisky’s offseason has featured moments (yes, plural) in which his head coach called out his biggest challenge as a quarterback, his team sought to replace him with the likes of Teddy Bridgewater and Andy Dalton before ultimately bringing in competition for the QB1 spot in Nick Foles, and his fifth-year option being declined. Now, ESPN is listing him as one of the offseason’s biggest losers. The guy can’t catch a break.

•   You can read Bill Barnwell’s latest at ESPN here, as he sorts out the winners and losers of the 2020 NFL offseason. It’s wild to think about how we ended up here in the first place. Two years ago, Trubisky was looking good as the Bears were adding pieces throughout the roster and building around a second-year quarterback and first-year offensive-minded head coach. Now, Chicago is back to ratcheting up the defense and hoping the offense does enough with some new philosophies and tweaks in the coaching ranks. Bold strategy, but one the team hopes will hold over until a better long-term quarterback solution presents itself.

•   This nugget from Barnwell sent chills up my spine: “Eight other first-round quarterbacks have had their fifty-year option declined. None of them made it to a fifth year with the team that drafted them. Six of them — Jake Locker, EJ Manuel, Christian Ponder, Brandon Weeden, Johnny Manziel and Paxton Lynch — didn’t take an NLF snap anywhere in Year 5.” GULP. Make history or be history, Mitchell. At least, that’s what history tells us.

•   Rodney Harrison doesn’t paint a pretty picture of the future either. JJ Stankevitz (NBC Sports Chicago) caught up with Harrison for an upcoming episode of the Under Center Podcast, and the Western Illinois University product doesn’t mince words. “Let me tell you something,” Harrison said. “I’m an expert on quarterback busts, bad quarterback because I played with Ryan Leaf.” Harrison would go on to say if Trubisky doesn’t start in 2020, he won’t start again and that his career as a backup will begin. And if that’s how it goes, Harrison believes Trubisky will be considered one of the NFL’s biggest draft busts.

•   More on the Deshaun Watson tweet, but in the form of a podcast:

•   Cast iron cookware is among the Deals of the Day at Amazon today. #ad

•   Mic’d Up Allen Robinson is the goods:

Interesting note per Over the Cap on the Bears’ safety contracts…

Still expect Gipson to start; contracts a reflection of the timing when signing free agents.

The #Raiders have agreed to terms with free-agent CB Prince Amukamara, sources tell me and @RapSheet. The former first-round pick heads to Vegas for his 10th NFL season.

•   From the air, Amukamara’s new home looks like they turned the Death Star into a hockey puck: