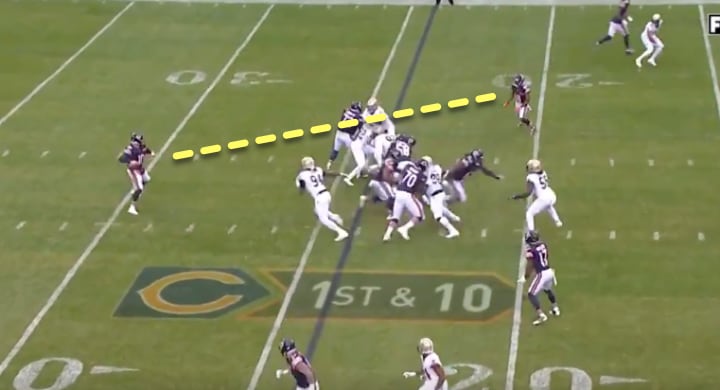 Before I get off and running with this post, I want to make one thing clear: My intentions are not to pile on Mitch Trubisky with everything that follows. Legitimate criticisms aside, we’ll come to learn by the end of this post, it’s not entirely on him. With all of that in mind, I saw a stat fly across my timeline today that nearly knocked me off my seat.

Here it is, from long-time NFL writer Doug Farrar:

Mitchell Trubisky had minus -42 air yards on RPO throws in the 2019 season.

Farrar cites a Sports Info Solutions stat that doesn’t look good in any light: Trubisky had negative-42 air yards on RPO throws in 2019. That number is jarring, but unsurprising. RPOs were problematic for Trubisky last season.

Behold this thread of an RPO gone wrong:

You see, at first, I read the defensive end crashing down and when he does that, my coaches tell me to keep the ball. After that I'm supposed to throw either the flat or stick route but, well, I just didn't wanna! I don't care what's open! pic.twitter.com/Ke2VBWe2Wp

And that's how I ended up here: underneath Cameron Jordan.

The thread above encapsulates Trubisky’s issues with RPOs.

To his credit, Trubisky makes the right read to pull and keep when he sees the extra attacker crashing down on a blitz. That was a good call. Making the right decision in that moment is half the battle. But he looks to a wide-open Taylor Gabriel who is off to his left, then simply falls apart for no apparent reason. Brain fart? Situational freeze? Glitch in the system? A skip in the space-time continuum? Whatever it was, it resulted with Cam Jordan sitting on Trubisky’s head and a 2nd-and-forever.

What troubles me more, however, is that I’m not sure Trubisky knows how to diagnose what was right and wrong in that play:

Mitch Trubisky on the RPO that turned into a sack: "I made a bad decision. (Cam Jordan) does do a good job with (making it look like he’s crashing the RB) but it would have been an easy handoff read. I was doing too much with my eyes on that."

On that much-discussed, maybe now-viral RPO, #Bears QB Mitch Trubisky said he should have just handed the ball off to RB David Montgomery.

In the moment, Trubisky makes the right decision, then executes poorly. So having second thoughts about the decision itself has me raising an eyebrow.

To be fair, Trubisky is right to believe (in hindsight) a hand-off was the easy decision to make. And I suppose there is nothing wrong with the easy play. “Work smart, not hard” is something my pops tells me to this day. But with Jordan crashing off the edge, a blitzer coming in hot, and a defender swimming inside against Bobby Massie, the hand-off would have likely been stuffed for little to no gain. In the moment, Trubisky made the right call. And had he followed through with his first open read, Trubisky could have hit an open Gabriel, who could have picked up some quality YAC had the play been properly executed. Instead, I’m sitting here circling this moment as a reason as to why the Bears have an RPO problem.

Proper execution of RPOs comes down to decision-making. Which brings me back to Week 1, when Bears Head Coach Matt Nagy was drilled for having a wonky run-pass play-calling balance. But as Nagy explained, there were RPOs that would have been runs had Trubisky not opted to pass. It was a moment in which Nagy came across like a disappointed father figure who didn’t want to throw his QB under the bus, but also wanted to make sure it was clear that his decision process was less-than-desirable. But given time and space to think about the moment, it provides another example of Chicago’s RPO problem.

The good news is that this is fixable. Better than that, examples exist of Trubisky and the Bears offense thriving with RPO usage.

From @NFLMatchup — Matt Nagy’s RPO schemes can create explosive play opportunities for RB Tarik Cohen. We went back to the Week 14 film to break it down. #Bears #Packers pic.twitter.com/p6oJJcrS5r

This is RPO “candy”. When the BSLB (50) plays the run, Trubisky pulls the ball and throws the SLANT to the RB (Cohen) in the SLOT. Easy read. RBs who are great receivers are a matchup nightmare. Cohen had 74 receptions in 2018. pic.twitter.com/JppFCE2qsm

I expect to see plenty of Outside Zone / Slants RPO's from the Bears in week 1. Great play against coordinators like Pettine that are creative and aggressive. Worked very well for the Bears in week 15 last year. pic.twitter.com/GGQCHQakSw

This is why Nagy (not once, but TWICE) made it a point to say that Trubisky needs to become a master in reading coverages in the offseason. Because if Trubisky can get to the point where he understands what defenses are throwing at him, then he can distribute the ball to playmakers quickly and decisively. It’s not as if Nagy is asking Trubisky to do something he can’t. Instead, Nagy’s ask is to become a master coverage reader so Trubisky can execute with more consistency.

And if Trubisky can’t, I imagine Nick Foles was brought into the mix because he has shown an aptitude to do exactly that: