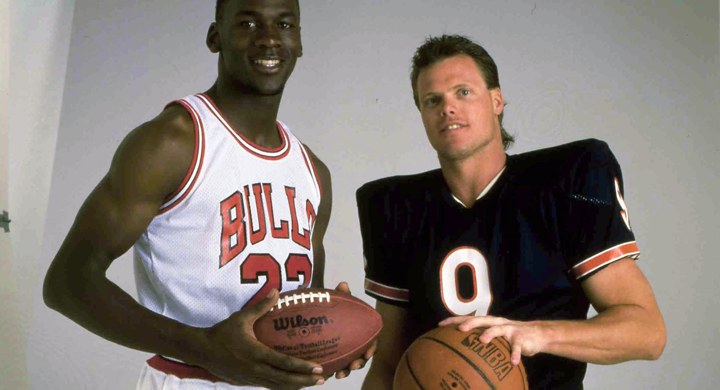 I’ve been on a cooking spree since Friday: Grilled steaks, sausages, bacon (on a stick!), beef and chicken kabobs, baked potatoes, diced potatoes, and Oreo-stuffed brownie cupcakes (Michael: And that’s just Friday!). I’m going to take a break early in the week, but I’ll be back out there in due time. In the meantime, I should really be looking to develop delivery services for my friends.

•   “The Last Dance” came at a perfect time for Chicago sports fans. From a Bulls fan’s perspective, connecting to the past during a time when the organization is getting its long-awaited, much-deserved overhaul will provide some perspective as the franchise enters a new era with a clean slate. But as a Bears fan, I couldn’t help but feel that itch for football. Or maybe it’s just that I miss live, competitive sports so much that my brain defaulted to that as I started writing this morning.

•   Or perhaps there are lessons to be learned of watching “The Last Dance” come to its conclusion on Sunday.

•   Michael Jordan’s “live the moment for the moment” quip resonates with me this morning. Even as he was bugged about this, that, and the other from everyone around him, Jordan found a way to compartmentalize, stay within the moment, and deliver when called upon. There are at least a dozen things to take away from the documentary, but the idea of being in the moment and living it to its fullest is the one that reached me the most. And I hope it’s something that younger generations connect with, too.

•   Don’t get me wrong, there is so much more to have been learned from this experience. The overarching theme of the necessary competitive drive, the importance of trusting those around you, the significance of building something the right way without shortcuts, and the sacrifices one makes to be great are among the things that came into focus over the course of these 10 episodes. Those themes are among those I hope that the professional athletes we root for take to heart. And yet, I keep coming back to Jordan on the piano talking about living the moment for the moment. That was art.

•   Oh, and yes, ownership’s role in building and maintaining a winning environment should not be understated. I can’t imagine it falling under that category after watching how Jerry Reinsdorf and Jerry Krause allowed the best thing to happen to their organization walk away for reasons that were surely not justified by the explanations that were given at the time or in hindsight.

•   One question on many minds right now is how one could make a version of “The Last Dance” for the Bears. The obvious answer is a documentary on the Super Bowl XX champs, but I’m not into easy answers. Off the top of my head, I’d be really interested in a fuller story behind the Mike Ditka-Buddy Ryan breakup, Ditka’s move to the Saints, the build-up to being the Super Bowl XLI runners-up and decline the ended with Lovie Smith’s dismissal after a 10-win season come to mind. Ditka vs. Jim Harbaugh. Ditka vs. McMahon! Ditka vs. the whole dang world. There’s just so much!

•   And yet, I feel as if one of the most intriguing short films might be in the Marc Trestman two-year run of ridiculousness. No, I don’t love re-living it. But the drama might be too good to pass up. Think about it. The process of picking Trestman over Bruce Arians, creation of one of the most prolific scoring offenses in Bears history, Josh McCown’s heater, Jay Cutler’s almost-perfect game in Week 17 against the Packers, Chris Conte’s coverage gaffe, Mel Tucker’s horrific defenses, internal drama with Brandon Marshall, Cutler’s extension, players getting booted from practice and threatening personnel on the way out the door, and the firing of Marc Trestman and Phil Emery after Virginia McCaskey was “pissed off.” There’s just so much that happened in two years that a thorough re-telling would be nice.

•   I’m already on the record having said that if I won a mega millions lottery that netted me nine figures, I would commission a documentary for the re-telling of the 2017 NFL Draft. Not just how the Bears got to picking Mitch Trubisky, but it would be more about how a vast majority of draftniks had him as QB1 in that class. I’d love to talk to high school, college, and pro coaches about quarterback evaluation. Digging into the brains of talent evaluators and discussing the things they look for in quarterbacks. Their hits and misses. There is so much we — as a football-viewing public — don’t know or understand about quarterback scouting, development, and evaluation that a documentary about how the sausage is made (especially in this particular instance) would be great. Or we could do a Peyton Manning-Ryan Leaf doc and unearth why there was a loud chorus of folks who thought Leaf was the better prospect with more pro upside.

A tale as old as time pic.twitter.com/SEeZNfYFEW

•    That Jordan documentary was so good, it got me agreeing with cheeseheads. Come on, now. Don’t tell me about LeBron being the G.O.A.T. until he has Cubs-Cardinals fans on the same page, arm-in-arm.

•   Robert Quinn’s birthday is reason enough to share these highlights:

The player ➡️ The personality

•   I miss football in general, to be totally honest:

•   GOLLY! I want Philip Rivers mic’d up for each and every sack he takes against the Bears in Week 4:

Coming soon to Indianapolis: DANGITS, GOLLYS and all the trademark trash talk of Philip Rivers.pic.twitter.com/4bRJUltE4w

•   ICYMI: NFL owners are reportedly considering draft incentives for teams hiring minority head coaches and general managers. The proposal is mind-bending in a way. And in that vein, this was an interesting read:

Some thoughts in advance of an expected vote on the NFL’s controversial and highly flawed plan to address its hiring crises. https://t.co/pMIMBjqmFk