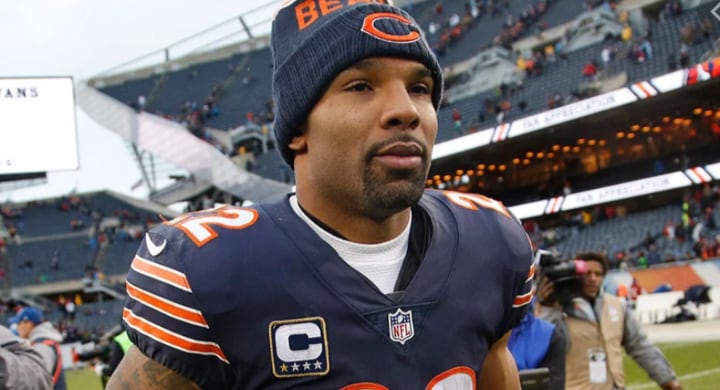 Yesterday, I stumbled on a way to make my special brownie recipe bette (let’s just say an Oreo-stuffed brownie isn’t where the fun should end). Indeed, I think making the bottom layer a double-chocolate chip cookie would make for a wild experiment and even crazier eating experience. You can count on me trying that out sometime this summer, even if it might come during a time of the year when I hate baking.

(Michael: PLEASE invite me over for this one).

•   Here’s an interesting read to get the brain flowing:

•   Johnathan Wood of Da Bears Blog dives into the Bears’ production of explosive plays in tandem with the avoidance of negative ones. It’s a concept that allows you to think of the offense in a different way and from a different angle. I dig it.

•   I suppose it’s refreshing that the Bears weren’t that bad in the negative plays department. Chicago produced 131 negative plays last year, while the league average is 134. In a perfect world, your offense produces no negative plays. But let’s not forget that the guys on the other side of the line of scrimmage get paid to do a job, too.

•   Clearly, the more problematic number is that the Bears were at the bottom of the barrel when it came to explosive plays. Their 48 were the least in the league, while NFL average was 74. That is a woeful number that needs to change for the Bears offense to be worth a darn in 2020. If Chicago doesn’t show improvement in that area, I feel as if a search for the next quarterback will only be scratching the surface of the franchise’s offseason to-do list.

•   Something to think about:

•   ICYMI: Mitch Trubisky will get the first crack at the QB1 gig, but Foles is here to win the job outright.

•   Forte would’ve put up some crazy numbers in Matt Nagy’s offense. Or any more modern offense that allows the back more freedom and play-making opportunities in the passing game. No. 22 was a great one!

Most completions to RBs last season

•   Carve some time out of your day to read up on Arlington Hambright, the seventh-round pick whose path to Chicago is compelling. A remarkable piece of work from The Athletic’s Kevin Fishbain:

Arlington Hambright had 0 scholarship offers. All he had was a letter from a local D3 college.

My story on his football journey, from JUCO to Oklahoma State to Colorado, and a strong mother-son bond https://t.co/YpvZWq31WA

On this day in 1935, the NFL adopted an annual draft of college players, with teams selecting in an inverse order of their previous season standings.The first draft was held on Feb. 8, 1936 with the Eagles selecting Heisman winner Jay Berwanger with the No. 1 pick.

•   Speaking of drafts from yesteryear, Lester A. Wiltfong Jr. (Windy City Gridiron) righted a wrong by taking George Kittle with the third pick in the SB Nation 2017 re-draft. With Patrick Mahomes and Deshaun Watson off to Cleveland and San Francisco, respectively, Wiltfong sends the top all-around tight end in the game to Chicago. That means no crazy money on Trey Burton or Jimmy Graham. No Adam Shaheen. And no overflow of dudes in the tight ends room in 2020. Would I have preferred Christian McCaffrey or Myles Garrett? Maybe. But it would have been worth it.

•   For funnies, here is Kittle and Brian Urlacher talking football:

•   Kittle telling Urlacher he was at the Nathan Vasher 108-yard return game is mind-blowing to me. Oh, what memories we had!

•   These are important conversations to be having right now, especially with changes to the Rooney Rule being imminent:

Here we discuss the widespread reaction to the proposed resolution to incentivize the hiring of minority head coaches and football execs, as well as the mischaracterization that the measures are part of the Rooney Rule. pic.twitter.com/cET8lP4Kp0

NFL Commissioner Roger Goodell today tapped Jeff Miller as the league’s new Executive Vice President of Communications, Public Affairs and Policy. Miller will be responsible for managing NFL’s communications and public affairs. He will maintain his health and safety portfolio.

•   You never know what’s going to happen when the Cubs and Cardinals get together: