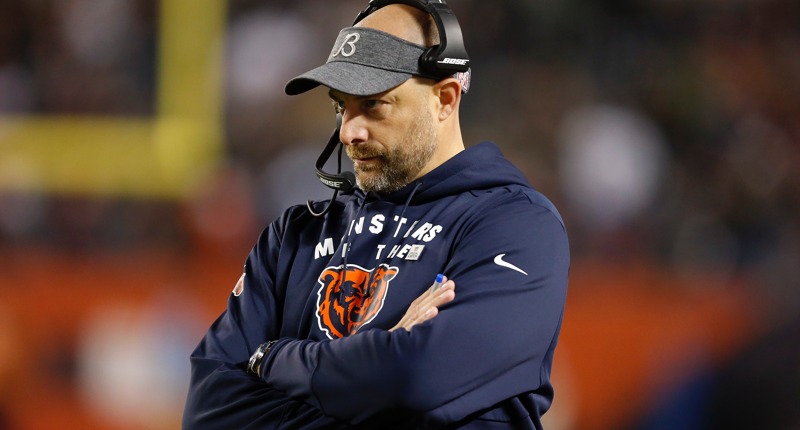 It’s almost as if Matt Nagy heard our collective critiques as a fan base and decided to do something about it.

Albert Breer’s latest from the MMQB at Sports Illustrated is loaded with Chicago Bears-related goodness, including the QB1 battle chatter we discussed yesterday. But the juiciest morsels stems from his conversation with the Bears’ head coach, Matt Nagy. Specifically, how Nagy is handling life with a wave of new coaches.

In addition to Offensive Coordinator Bill Lazor and Quarterbacks Coach John DeFilippo, the Bears have new assistants coaching tight ends (Clancy Barone) and the offensive line (Juan Castillo). And to this point, it turns out that getting new voices in the room to critique Nagy’s offense, play-calling, and decision-making has shed new light on old issues. Even if it has come at the expense of drawing the coach’s ire.

“I’d get pissed off and say, ‘No, put on 2018 and show them how that same play worked,” Nagy explained. “Then those coaches see that same play and say, ‘Well, 2018, that play looked pretty good.’ So that’s been our challenge: Why? Why from 2018 to 2019 did that happen? There’s a lot of things that go into that. And I will always start with myself in all of this, you have to be able to do that.”

Breer writes that the staff changes were about seeking pushback, which is encouraging. As an individual, you’re only as good as the people you surround yourself with. If you’re around people who challenge you, you’re likely to grow from it more than you would if you surrounded yourself with yes-men. The same can be said about coaching. And there is something to be said about a healthy give-and-take from coaches, especially so long as everyone is pulling from the same side of the rope at the end of the day.

More importantly, Nagy appears to be circling back to the fact that it starts and ends with him. Additionally, Nagy appears to be open to criticism and willing to learn from it. Look no further than his change-of-heart regarding how he plans to approach playing regulars during the preseason.

Ultimately, that’s what leadership is about. When things go well, you reel in the praise as the guy at the top. But when things go poorly, you have to own it as a leader. That’s just how the cookie crumbles.

Here’s to better processes in 2020 leading to better results than what we were given in 2019.