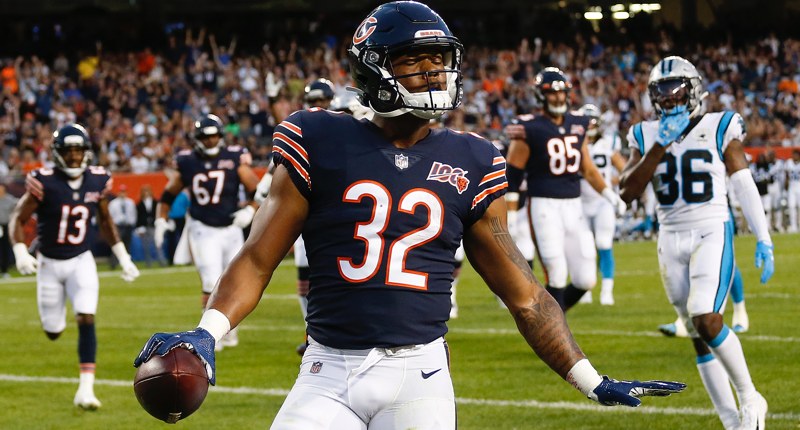 The highlight of my day yesterday was sharing some recently baked brownies with a friend I hadn’t seen in a long time. I should probably share my baked goods with others more often because (1) it feels good and (2) I don’t need all this chocolate around the house. But mostly, it felt good to share with others.

•   I found myself getting a hearty chuckle out of the My Plans/2020 memes that have taken over the web. Naturally, the Bears-themed gags are my favorites. Let’s laugh together, shall we?

•   OK … the last one made me cry. Nevertheless, good stuff from the Bears Twitter community. Well done, y’all.

With the sports world on hold because of the coronavirus, we’re looking back at every Bears starting quarterback. Next up, Sid Luckman. The Bears never had a quarterback like Luckman — and they haven’t had a quarterback like Luckman since he threw his last pass. Football has evolved through the years, but Luckman was ahead of his time, one of the game’s great passers who set record after record, including 7 touchdown passes in one game. Taken with the No. 2 pick in the 1939 draft, Luckman led the Bears to the their greatest era, winning 4 NFL titles while being named a first-team All-Pro five times. The only truly elite quarterback in team history, Luckman’s numbers, success and accolades nearly make him the Michael Jordan of Bears quarterbacks. His 5-time All-Pro honors are more than other Bears quarterbacks combined (3). He led the league in passing 3 times; only one other Bears QB led the NFL in passing. He had the top passer rating 3 times; Bears QBs have combined to do that twice. He led the league in touchdowns passes 3 times, another feat only matched twice. Upon his retirement in 1950, Luckman’s career passing numbers (14,686 yards, 137 touchdowns) stood as Bears records for more than 60 years — long after the game shifted from run-oriented to pass-oriented offenses. Luckman’s legacy is the standard by which all Bears quarterbacks are judged. Of the Bears’ 9 NFL titles, Luckman was the quarterback for 4 of them (1940, 1941, 1943 and 1946). In 128 games and 62 starts, he threw for 137 touchdowns, 132 interceptions and 14,686 yards, a 75.0 passer rating. The Hall of Famer retired in 1950 and would later join the Bears as an assistant, including being on the staff of the 1963 NFL champions. For more photos and Bears coverage, click the link in our bio. (@vintagetribune photo / @chicagotribune) #chicagobears #bears #beardown #dabears #sidluckman

•   Sid Luckman was THAT DUDE. Five first-team All-Pro nods is more than all other Bears QBs combined. That’s nuts.

•  The five All-Pros and three Pro Bowls are going to be tough to come by, but some of the other numbers … come on. I long for the day when Jim McMahon and Jay Cutler aren’t battling to be behind Sid Luckman among the best quarterbacks in franchise history. Just one stud QB before I die … please?

•   These Bears player profiles on the team’s YouTube page are just so well done. Good job to everyone involved in these projects.

I can’t wait to see the #Bears let David Montgomery EAT in 2020. pic.twitter.com/G6h6BEyvbw

•   Yes, I realize that running the ball more often isn’t hip to the game right now. And indeed, I understand that passing the ball is a more effective way to matriculate down the field. Sure, I accept that you don’t need to run it effectively to have an impactful play-action game. But wouldn’t it be more fun if the Bears *DID* have a running game other teams had to respect. Or called it enough times to throw off defenders a little bit. Because even if it’s a half-fraction of a millisecond more, it’s quite obvious to me that this offense could use every advantage it can get.

•   It’s why I find myself intrigued by the potential of the Bears using more “12” packages in 2020. Two tight ends who could run out for routes or stay in and assist the offensive line with blocking help should aid Matt Nagy and the offensive braintrust be less predictable in 2020. Bringing variety to the table is important. It might not be the sweeping change everyone desires, but I am convinced that every little bit helps along the way.

•   Fun with small sample sizes: David Montgomery averaged 4.3 yards per carry over the final five games of the year and as given the rock – on average – 17 times per game. Extrapolate those numbers over a full 16-game season and we’re looking at 275 carries, 1,184 rushing yards. As a Bears fan, you’ll sign up for those numbers … right?

•   That five-game spurt came after Montgomery was bottled up for 1.69 yards per carry against the New York Giants. In retrospect, getting locked up by a whack Giants defense probably cost someone on the offensive side of the ball their gig.

•   Look, I wish that the Bears could sling the pigskin all over the field and be fun like *gestures at any number of teams in the league* but you have to make do with what you’ve got as a team. Just some food for thought.

•   And yet, these numbers ain’t pretty:

•   When defenses don’t respect your quarterback, and your offensive line struggles, and you’re rotating tight ends in and out of the lineup, this is what it looks like when your running back is going into the teeth of a loaded box.

It's #BearAwarenessWeek, so we're bringing you Chicago Bears as… well, bears. 😂

•   Rain boots, supplements, and more are your Deals of the Day at Amazon. #ad

A QB competition stuck on Zoom?

What’s next for the #Bears and Mitch Trubisky?

And remembering Michael McCaskey with ⁦@danpompei⁩.

•   Jim Abbott was one of the most fascinating players of my childhood. His no-hitter in 1993 is something I definitely wrote about as a school assignment as a child because it was so interesting to me

“If anyone tries to come up and snatch my food away, I’m going to do my best to whip their ass. And believe me, I could’ve took MJ in a heartbeat." https://t.co/ZDuwmt2vGI