Matt Nagy Called Upon a Secret Guest to Help Tutor Mitch Trubisky, Nick Foles, and Tyler Bray ... But Who Was It?
Search
Skip to content 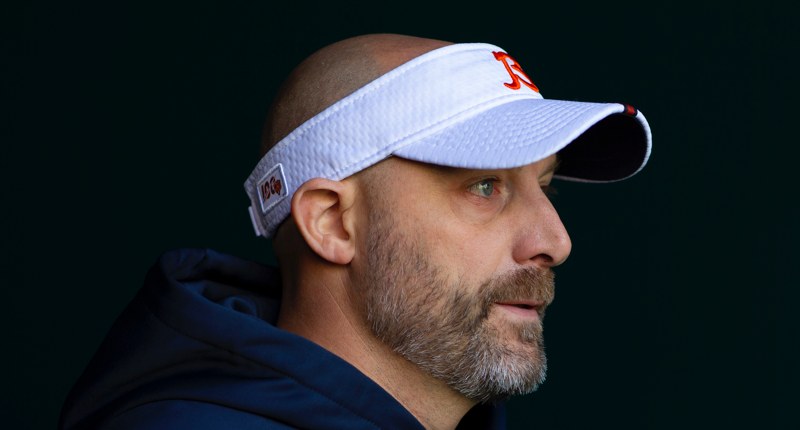 Matt Nagy is pulling out all sorts of tricks as he prepares the Chicago Bears through virtual team meetings.

Albert Breer’s recent MMQB post at Sports Illustrated is full with Chicago Bears-related goodies, and among the best is a nugget highlighting how Nagy has been calling special guest speakers to talk to the team, even breaking into smaller groups to provide more isolated give-and-take in the interactive experience.

One particularly intriguing example of a such meeting happened in the quarterbacks room. Check out how Breer painted the picture of the situation:

“And so it was that, a few days back, a former quarterback with a background in the offense going back a couple decades was invited into the quarterback room, and entered with the intention of breaking down a single play. He, Mitch Trubisky, Nick Foles and Tyler Bray, and Chicago’s cadre of quarterback coaches, went over footwork. They went through the progression. They talked adjustments and execution.”

What a wonderful concept. Because while having Nagy, John DeFilippo, Dave Ragone, and Bill Lazor as long-tenured quarterback molders, I imagine it was nice for Chicago’s QBs room to have a different voice leading the discussion- an ex-player with extensive experience within the system no less.

But who could it be?

Breer didn’t name names, but did drop the hint that the quarterback had experience in the offense “going back a couple of decades.” That probably eliminates the likes of Aaron Murray, Kevin Kolb, A.J. Feeley, and Mike Vick as quarterbacks Nagy has had his hands on over the years. And I can’t imagine Washington would allow Alex Smith, who’s inching toward a career in coaching at some point in his near future, to reach out and help players on another NFL franchise while still under contract.

This brought me to two names that made sense based on the limited information we have been provided by Breer’s story.

The first is Donovan McNabb.

Nagy was a coaching intern with the Eagles in 2008 and 2009 under Andy Reid, in what turned out to be the final two seasons of McNabb’s tenure in Philadelphia. McNabb had 11 years in Reid’s offense, including six Pro Bowl appearances, 16 playoff games, and a run to the Super Bowl. If anyone is equipped to talk shop and share knowledge about Reid’s offense and what goes into it, it’s McNabb. It probably doesn’t hurt that he’s a Chicago product who probably gets “it” when it comes to how Bears fans are staving for quality QB action.

Note: Breer also mentioned that the unnamed quarterback broke down footwork, which got me digging into McNabb’s history. For example, this story from the official website of Washington’s professional football team features a quote about the challenges of learning mechanics, saying: “It’s not going to happen in a day. I really all depends on what you do to try to work on it. Sometimes when you have been doing it for a while, you will go back or revert back to what you know or what has gotten you to the point you are at. Everything is a work in progress. We are learning a new offense, getting accustomed to each other, getting out and doing what we need to do. That is something that is a progression.”

Well, that certainly seems like a message that could be sent across and be received by everyone currently in the Bears’ quarterbacks room. There is also a tidbit about how McNabb spent 11 years in Philly’s offense, and that the mechanics required to work in that system “were like a second nature to him.” Again, something else that probably needs to be drilled into the minds of Chicago’s quarterbacks.

And if all else fails, quarterbacks can be directed to the McNabb workout plan:

McNabb wasn’t the only quarterback who came to mind when trying to piece together an answer, however.

Reid’s system has worked with the likes of high-profile names such as Brett Favre, Jeff Garcia, and Steve Young. It has also reached out into the high school game, as Koy Detmer — who spent nine years in Reid’s system as a backup — is coaching a similar system with more spread concepts in California. Detmer’s successful high school football coaches bloodline would make him a sensible choice as an ex-NFLer looking to work his way up in the coaching world.

In any case, it’s wonderfully awesome that Nagy is going to great lengths to figure out the quarterbacks room. Here’s hoping it works wonders in the long run.