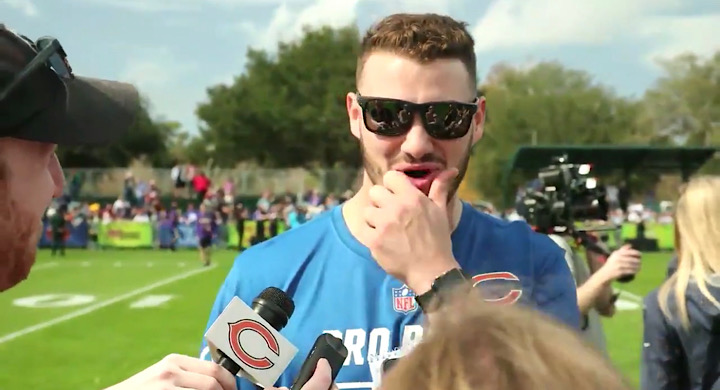 I am committing to spending a healthy chunk of my day outside in the sunshine. Most of my time will be spent in my yard, where I’ll throw some meat on the grill and let the charcoal fires do their thing. While doing so, I’ll be listening to some old school jams because I fell down a rabbit hole and found some old James Brown funk band stuff that is an absolute vibe on a day like today.

Check it out and diversify your music catalog:

•   The good news is that I stumbled upon a stat in which Mitchell Trubisky doesn’t rank as the worst among players at his position. But the bad news is that it’s still pretty bad. And what’s worse is that it’s a pretty important metric. Trubisky’s 34.3 completion percentage on deep balls puts him at 27th of 33 qualifiers on PFF’s grading scale. That 62.4 passer rating on those those isn’t pretty, either. So much so, author Sam Monson believes it could be a factor in Trubisky losing the starting job in this summer’s competition.

•   In search of more good news? I’ve got it! Because, believe it or not, Trubisky had some success throwing deep early in his career. In his first three games as a pro, 25 percent of Trubisky’s throws went for at least 15 yards in the air. It was a small sample, to be sure, but a 25 percent throw rate for deep balls ranked among the upper echelon of quarterbacks. Trubisky’s 58 percent completion rate on those throws was above average and viewed as a sign that good things were on the horizon. Unfortunately, that hasn’t come to roost to this point, but that snap shot shows Trubisky has the ability to do it — even if it hasn’t shown up with any consistency.

•   There’s even some video proof of Trubisky’s deep ball excellence from 2018, which showed how much he had grown from his rookie year to his second season as a pro.

•   No, it didn’t age well when then-QBs Coach Dave Ragone said he didn’t have concerns about Trubisky’s deep ball accuracy. But it’s not as if there was no reason not to feel some sort of optimism entering 2018. I mean, Trubisky’s six 50+ yard air completions were the most in football in 2018. Good vibes weren’t without merit at the time. But sometimes, things just don’t work out. It happens in football from time to time.

•   I miss this Mitchell Trubisky so much:

.@ChicagoBears @Mtrubisky10 making the kind of “sophomore “ jump that most teams only dream about. The talent that they have brought in is all paying dividends . It’s only 6 games but it sure feels like #Bears are doing things right even after a painful loss. #BaldysBreakdowns pic.twitter.com/PT1zoGENk7

•   Next time, I’ll be more careful when wishing upon a star and asking for the Bears’ QB1 to be in a tier of his own:

Mitchell Trubisky is in a tier of his own. Wow. Big praise.

•   OK, but seriously … what is this? How can Baker Mayfield be in the “you can win with them” tier? What exactly has he won? Josh Allen and Trubisky have similar profiles after their first two years as pros and might as well be two peas in a pod. And where’s Nick Foles in this? Shouldn’t he be in the TIER 4 with the “you can win with them” guys because, you know, the résumé says he’s a #provenwinner. At minimum, he should be in the Ryan Fitzpatrick tier of guys who are “guys, veterans, and place holders.”

•   One small (but not-so-small) thing: A pet peeve of mine is the misuse of the “the verdict is out” idiom when a writer/content producer wants to say “the jury is out” instead. The two are very, very different. And I cannot stress it enough how much it grinds my gears when that is used incorrectly. If “the verdict is out” on the guys in TIER 7, then they should be in one of the above tiers. That’s because the jury has made a decision. Hence, a verdict been gout. But if the jury is out, then that means there is still deliberation. And as far as I’m concerned, THE JURY IS OUT on Joe Burrow, Gardner Minshew II, Jarrett Stidham, Dwayne Haskins, Drew Lock, and Daniel Jones. /end rant

Khalil Mack vs. Akiem Hicks over the last piece of steak https://t.co/8zKtD2ci1O

•   A very narrow cross section of folks would need this, but I’m one of them, and it’s a great deal, so I pass it on: a cheap USB-C adaptor at Amazon. #ad

•   I want to feel like basketball is around the corner:

Basketball Is Likely to Start Back Up This Summer, But Will the Bulls? And Other Bulls Bulletshttps://t.co/yTfOSbedqt

I documented how coronavirus spread has actually happened in public places, so we can learn what to do and not to do:

and more. Here's what I found, for @sltrib.https://t.co/BZ7FOrYzSB