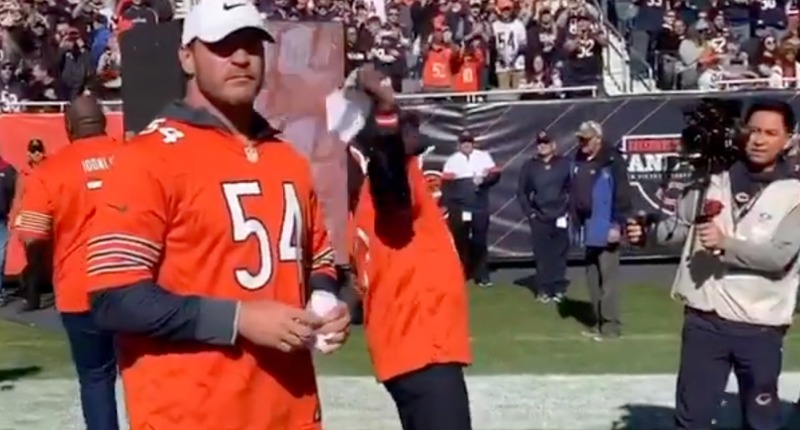 I wore a black shirt for the first part of yesterday because it was at the top of the pile of laundry that I folded, but had yet to put away. That didn’t last long, as I realized wearing a black shirt on a warm day while standing in the sun was less than ideal. And then I realized I don’t have a ton of light-colored shirts. At some point (possibly soon?) I should re-work my wardrobe.

•   The lead-in to Brett’s Cubs Bullets was so good, I wanted to share it here, too:

Memorial Day is simultaneously viewed by many as a somber, reflective day, and also a day to gather with family and friends to greet the start of summer. That’s always felt a little incongruous to me. Not bad or problematic, mind you. Just kind of something that goes into the back of your head and makes you struggle a little to find the right tone for the day.

And that couldn’t possibly be more true than it is today, where you have not only the opportunity to reflect upon the lives lost in service and defense of our country, but also to be confronted by the lives lost here and now in this moment. Because that other part of Memorial Day – the friends, the family, the BBQ, the beer, the sports – is fundamentally reshaped this year by the pandemic. It’s a mix of thoughts and emotions that I’m not quite able to articulate well enough here, other than to note it. To all those who have lost loved ones, I’m thinking of you today. And to all, I wish you a safe, healthy, and yes, happy, day today.

•   Today is Brian Urlacher’s 42nd birthday, so let’s take some time to celebrate by enjoying some highlights

•   Four-time first-team All-Pro. Eight-time Pro Bowler. NFL Defensive Rookie of the Year in 2000 and the league’s Defensive Player of the Year in 2005. Member of the NFL’s All-Decade Team for the 2000s. A consensus All-American in his final year at New Mexico. Enshrined into the Pro and College Football Hall of Fame. Urlacher’s résumé is a thing of beauty!

"You heard what he said – just compete. He's all about competing."

Coach Nagy made sure the team watched and learned from @BUrlacher54's PFHOF speech together last night in Bourbonnais. pic.twitter.com/SL9kL4Jtmy

•   Bears history is loaded with great stuff, even if some tough times are more fresh in our memory. Nevertheless, one of the cool things Nagy has done as a Bears head coach is bring back the stars of yesteryear to reach out to today’s players. Part of it is an attempt from the organization to mend some fences. But also, it’s good to have the old guard connect with the new guys. I hope it’s a practice that continues under Nagy’s watch. You can’t know where you’re going if you don’t know where you’ve been.

•   Fanatics is 30% off site-wide today only, so make sure you check that out if you’re down for some shopping. Always appreciate you folks checking out the deals and such that we share in here, as it supports us keeping doing what we’re doing.

I’ll come caddy and help you out against Tom. Let’s go! https://t.co/s55ayPmSAp

•   As a reminder, a potential Nick Foles vs. Tom Brady rematch is set for Week 5.

•   Golf highlights have made their way into Bears Bullets because that’s all we’ve got right now:

•   This is wonderful news:

In less than a week, YOU all have raised over $17,500 in support of our man @WaddleandSilvy as he kicks cancers ass! 100% of the profits are donated to @TheVFoundation! We are all #SilvyStrong! Link to donate: https://t.co/zlcfe0vSOm pic.twitter.com/lbLzzwFUVl