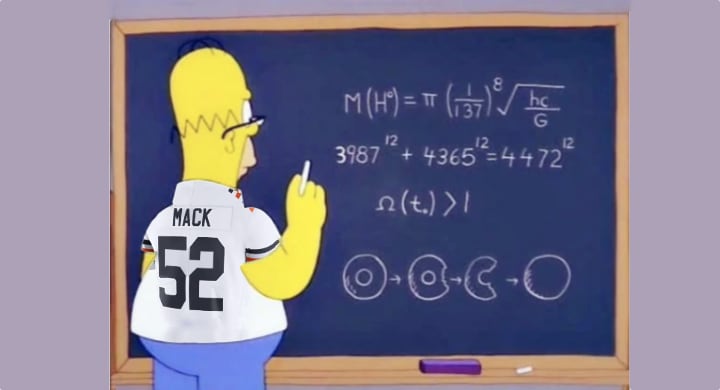 The Chicago Bears have been dragged at every turn throughout the offseason, and at first blush, ESPN’s 2020 FPI projection model appears to pile on ….

Gooooooood morning. Our Football Power Index ratings and projections are up for the 2020 NFL season!https://t.co/QaFcP4VuhZ

FPI’s projections sit the Bears down at No. 21 overall, which, in a 32-team league, is obviously not very good. They’re also projected to win 8.0 games with a 41% chance to make the playoffs – a far cry from the 3-win projections we’ve seen previously – which is nice, but I don’t think anyone from the Bears org is pinning this one up on the fridge. However … perhaps that was a rash reaction. A deeper look into the projections unearth a slightly different, more optimistic perspective.

Indeed, the NFC North is pretty clearly the tightest division in football:

And here's the NFC. pic.twitter.com/Y6ZTMdMU2d

As you can see, the Bears, Vikings, and Packers all appear to be in the same ballpark as far as projected wins are concerned in 2020. That should come as no surprise, as they’re the most talented teams in the division (each with selling points that could convince you this is their year and warts that could convince you it’s not). And that helps explain that while the Bears playoff odds/projected win total are apparently low, they’re actually not quite that dire, relatively speaking:

So then, perhaps the game-changer is how Chicago handles the softer parts of its schedule (which is, of course, somewhat baked into the calculus already, but still …). For example, the Bears have seven games against six teams projected to have fewer wins than them by FPI’s calculations next season: Two against the Lions (6.6 wins, 14% chance to make the playoffs), and one against the Jaguars (4.9, 4%), Panthers (5.6, 7%), Giants (6.1, 12%), Texans (7.6, 38%), and Falcons (7.5, 31%). I’m not saying Chicago should take these games lightly (and, indeed, the Packers/Vikings will also play the Lions twice). But I will note that the Bears’ path to the postseason won’t be as treacherous if they find a way to take care of business against teams they should beat.

All of which is to wind up here: The actual projected odds number of the Bears making the playoffs (41%) matters less than that numbers relative positioning among the other teams in their division. And since we know the Packers odds (43%) are virtually the same while the Viking are projected to win less than a full game more than Chicago this season, I take this as one of the more optimistic takes on the season yet.

Perhaps that’s not saying much given how bleak most projections have been, but hey … take the wins when you can, right?