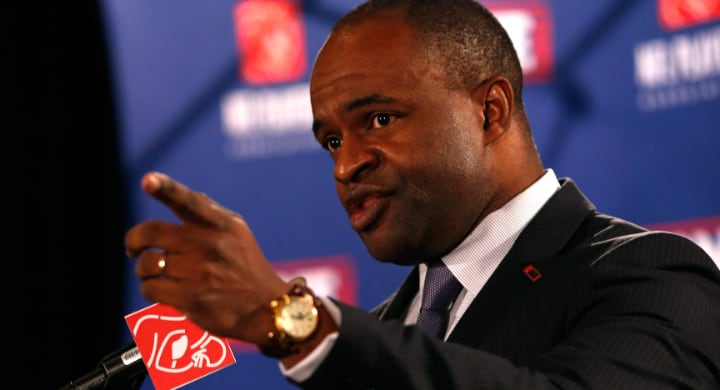 Unlike the NBA, NHL, MLB, MLS, NCAA, and other sports entities, the NFL hasn’t had to deal with a stoppage of play in its realm due to COVID-19.

Sure, adjustments had to be made, including tweaks to the schedule (with OTAs) and to the (virtual) NFL Draft. But because the regular season was months away from starting, the league didn’t have to worry about playing in a pandemic. However, the NFL is approaching its season with training camps, preseason games, and its regular-season contests set to kick off in the coming months. And with that comes posturing from the NFL Players Association and team owners.

During a recent episode of “Real Sports With Bryant Gumbel” on HBO, NFLPA Executive Director DeMaurice Smith was asked if he believes games will be played in 2020. Answering on a scale of 1 to 10 (with a 10 being absolute certainty that games would be played), Smith put the NFL’s number at a “six, seven.”

“I’m gonna go with a, you know, probably six , seven. But, you know, look, a lot depends on what happens with the other sports. And to say that we aren’t looking at what’s going to be happening in basketball and baseball — and we’re not looking at how they work though those things, we would — I’d be lying to you if we’re not. So how about if I go with six, seven on a curve?”

For the sake of comparison, National Basketball Players Association Executive Director Michele Roberts offered up “six” as an answer, citing concerns from players stemming from recent developments that babies and children have become infected. MLB Players Association Executive Director Tony Clark didn’t have a number, but said he would “remain optimistic” that games would be played.

On the other side of the coin, one NFL owner has been outspoken enough to declare the games will happen in stadiums this season.

In an interview on CNBC, Miami Dolphins owner Stephen Ross shared a far more optimistic forecast than any of the players association leaders did in their respective interviews with Gumbel on HBO.

Ross would go on to say that the team is prepared to go on and play games without fans in the stands, but maintained optimism that a return to normalcy when it comes to NFL games in stadiums was on track.

This, my friends, is what public negotiations and posturing looks like.

We’ll continue to follow this as the return of sports reaches a ramp-up period. In the mean time, I’m hoping for the best for (and from) all parties involved.