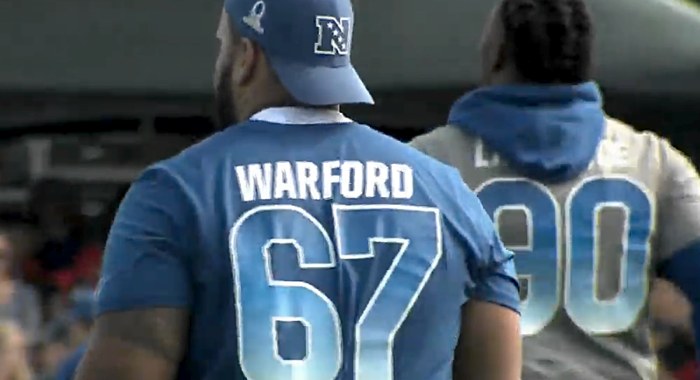 The Chicago Bears have $9 million (give-or-take on either end) in available salary cap space. And with ever present needs along the offensive line, there’s an understanding as to why the team might want to take one last dive into the free agent market before the season gets underway. Just don’t bet on it happening.

Among the items addressed in his latest mailbag, Chicago Tribune reporter Brad Biggs all but closes the door on the Bears making one last splash in free agency.

“The odds of the Bears making a “splash” addition with the calendar about to turn to June are low and any move, at this point, might not be quite as splashy as you’d hope,” Biggs said.

Biggs’ explanation went on to circle back to Larry Warford, the free agent guard who remains unsigned weeks after the Saints released him. The Bears were reported to have interest in Warford, but his price tag likely kept Chicago out from entertaining a full-blown pursuit. But as Biggs points out: “as long as (Warford) remains on the street, he’s at least worth keeping an eye on.”

In other words, so long as the Bears have questions regarding their starting right guard and Warford remains a free agent, nothing should be ruled out. And if Warford’s price drops at a time when the Bears are still considering a fill at the position, then maybe something could come together between the two sides. Then again, it seems pretty clear Chicago is ready to roll with a battle to fill Kyle Long’s vacant position. Free agents Germain Ifedi and Jason Spriggs, as well as returning players such as Rashaad Coward and Alex Bars could be considered in the running to be RG1 when the regular season begins.

It’s a risky endeavor to not have  certainty when it comes to who is protecting  Mitch Trubisky or Nick Foles. The simple idea of having the line in limbo makes me itchy. But perhaps that’s a testament to how the front office and coaching staff feels about the players they’ve assembled (and Juan Castillo’s impact as a new offensive line coach). Even still, it’s an awfully big risk and I hope it’s worth it.

You can check more from Biggs’ mailbag by following the tweet embedded below.

– Is Nick Foles a bridge to the future?

– Could there be a splash addition for the offensive line?

That and plenty more in this week's #Bears Mailbag.https://t.co/x1uOSMeCtZ