Matt Nagy Speaks: Righting the Wrongs, Getting the Most from Zoom, Mitchell Trubisky's Feelings, More Skip to content 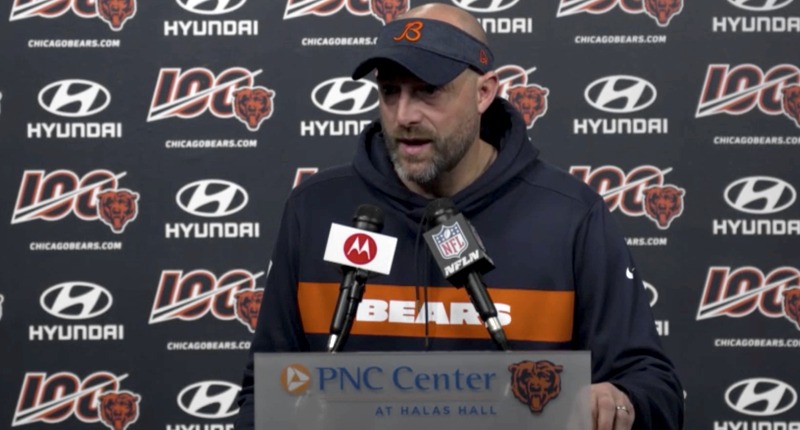 Chicago Bears Head Coach Matt Nagy went on a media tour on Wednesday, speaking with Mike Tirico (NBC Sports Net), Rich Eisen (The Rich Eisen Show), and Colin Cowherd (FOX Sports), as part of a whirlwind run around media land. In so doing, Nagy weighed in on a number of topics, including the state of the team, its quarterback competition and a lot more.

We’ve linked the full interviews above and have captured some highlights alongside some comments of our own below. Enjoy!

Virtual Offseason as the Wave of the Future

Conducting offseason camps by way of Zoom video conference chats isn’t what anyone had in mind for this offseason. However, it sounds like teams are making the most of it. And as far as the Bears are concerned, it’s possible that this offseason’s pivot to video could inspire future use of it down the line.

“We’re productive. We’re comfortable now. I feel like we’re rolling right now in regards to installs. We’re having some people come in an talk. It’s been really good. This is something I think a lot of us, just talking to some head coaches across the league, it might be something we implement certain ways in the future.”

Alright, so there were some hurdles to clear in the early going – before offering up the idea of using this platform, Nagy noted that there was a “get-to-know-your-computer” period for the coaches (which … LOL). Even still, that there’s a twinge of excitement about the idea of using this as a productive teaching and learning tool is pretty exciting. Any time you can learn something during dark times is a wonderful thing.

How is Nagy Handling Pressure?

When Nagy arrived in Chicago, he came with a clean slate. There was optimism aplenty and a certain feeling that the current regime had bottomed out during the John Fox era and was on the rise. So with that in mind, Nagy and the Bears entered the 2018 feeling free and easy. They had nowhere to go but up and were gifted with a talented roster to attack the season. We saw that as the team played loose, energetic, and fun. But as expectations came, things changed. And after not living up to the lofty goals they set for themselves in 2019, the 2020 Bears enter this season with a bit of pressure.

I would fall short of suggesting Nagy is on the hot seat (others might disagree). But that’s not stopping him from looking in the mirror as he assesses what went wrong last year and how it can be fixed.

“Myself, as a head coach, I need to be vulnerable and understand that it starts with me. And whatever I didn’t do good enough in 2019, I need to fix. So I look that thing dead on and I understand what we’re going to do.”

It’s truly refreshing to hear a coach come clean and fall on the sword. Some might view Nagy doing this as simply talk. But the way he has addressed his change of heart regarding playing regulars throughout the preseason, I don’t think it’s just talk.

Save for his podcast appearance with ex-teammate Chase Daniel, Mitchell Trubisky has yet to speak publicly since the Bears traded for Nick Foles, created a quarterback competition, and declined to pick up the fifth-year option on his rookie deal. Thankfully, when talking about the quarterback competition that looms this summer, Nagy opened a window into what Trubisky was going through when it happened.

“Any person, when that happens, you’re just going to feel like, ‘OK, how do I make this better?’ And for probably a day or two, he was that way. After that and ever since, he’s been really good. And I appreciate that about him.”

Neat. Trubisky handled it just as most people would. Think about how you can get better from the situation, then move on to getting better on the field. It’s a far more useful reaction than whining publicly, that’s for sure. Perhaps a fire being lit under Trubisky’s backside with a little bit of competition will spark something special as he enters the final year of his rookie deal.