I Still Believe in Anthony Miller (And You Should, Too) ... and Other Bears Bullets Skip to content 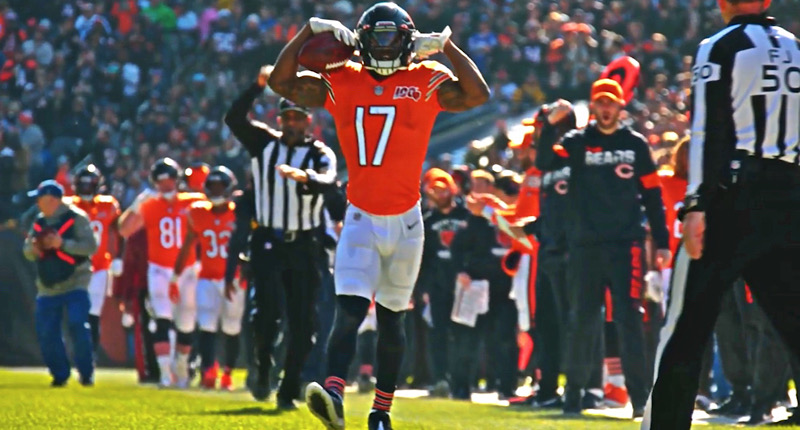 After the recent successes in brownie baking, I’ve taken the leap to something a little bit more challenging in trying to turn a no-bake cheesecake recipe into no-bake cheesecake bars. We’ll see how it turns out. Worst case scenario is that they don’t set as firmly as I’d like, which would leave me with cheesecake dip. And I suppose that wouldn’t be the worst thing in the world.

•   I still have high hopes for Anthony Miller:

•   Once upon a time, there was a belief that Miller’s breakout would come in 2019. It was his second year in Matt Nagy’s system. And while he was recovering from offseason shoulder surgery, Miller had plenty of time and access to learn the offense while bugging his head coach on the sideline. But things never came together for Miller last season, as his erratic play featured undisciplined moments with penalties and inconsistent route-running. And that his 2019 season ended with a shoulder injury in the season finale doesn’t help matters. But there is still reason for hope.

•   Naturally, Miller still holds out that hope, too. The Memphis product told Colleen Kane of the Chicago Tribune: “I feel like this is going to be my best year yet. I’ve matured a lot on the field and I’ve gained a lot of knowledge, especially this offseason. I’ve been studying up a lot on other players and seeing what they do so I can enhance my game.” Every bit helps, #17!

•   In a 10-game stretch between Weeks 5 and 14, Miller did a massive chunk of his work. He caught 46 passes for 621 yards and two touchdowns. Extrapolate those numbers on a per-16-game basis, and it’s a respectable 74-catch, 994-yard season. Who wouldn’t love that lining up across from Allen Robinson? Miller’s extended stretch of solid play was squeezed between the first four games of the season in which Miller caught just four passes for 28 yards and the final two games of the year in which he caught just two passes for 7 yards. Even still, that 10-game sample speaks volumes to what Miller *COULD* do once he gets a full grasp of the offense and receives competent quarterback play.

•   There’s just so much potential ready to be unlocked here:

•   Because I’m sure you’re curious, Mitchell Trubisky played in nine of those 10 games and posted this stat line: 62.8 completion pct., 2,186 yards, 14 TD, 8 INT, 85.2 rating. On a per-16-game rate, that’s a 3,886-yard, 25-touchdown, 14-interception season. It’s not world-beater stuff. But you could certainly make a case that your offense could get by with that type of production when teamed with an elite defense.

•   And that’s why getting the quarterback position right is so important. An up-tick in consistency and competence at the position would lift the Bears from the dregs of NFL offensive rankings to middle of the road. Now … don’t get me wrong. Middle-of-the-pack isn’t the goal when your franchise trades up in the draft to select the first quarterback in his class, then hires an offensive-minded head coach from a well-respected coaching tree a year later to get the most out of said quarterback, and tops that off with a number of free agent moves and picks in which seriously financial and draft pick capital is invested. But a step in the right direction is far better than the alternative.

•   What a difference a year makes: Chris Simm’s top-40 QBs list entering the 2020 season has Trubisky ranked No. 38. Ouch, babe. At this time last year, Trubisky ranked 20th on Simms’ quarterback rankings. Simms still shares a glimmer of optimism that Trubisky can rebound and even be better than he was in 2018. But Simms also envisions Foles as a likely starter and that the clock is ticking on Trubisky’s career as a starter. Oof.

•   Another reminder that scouting and developing quarterbacks is difficult:

•   The Bears will get a look at Eli Apple later this year when the Bears and Panthers square off:

The #Panthers signed veteran CB Eli Apple for a 1-year deal worth $3M, source said. That includes a $750K signing bonus. All things considered, a nice payday this late in the game for Apple, who appeared to have a deal with the #Raiders before it fell through during free agency.

•   I’m curious to see how this poll turns out:

Who is the worst comissioner in the 4 major sports?