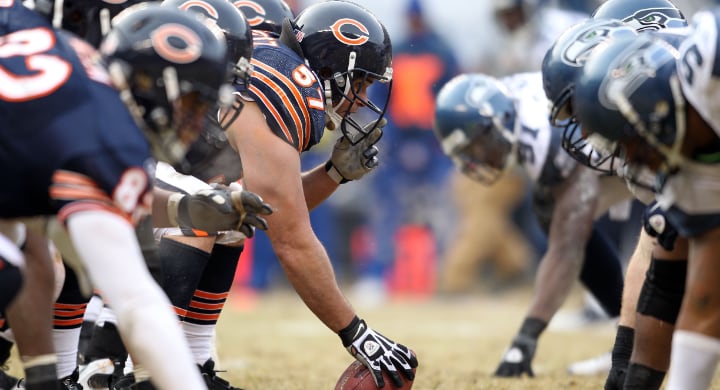 I won’t go as far as to say that the Chicago Bears’ offensive line play is the bane of my existence. But that unit’s sub-par play last season caused me much more pain than I’d care to admit.

And when it comes to offensive line play, no one has their finger on the pulse of it like Olin Kreutz. The retired long-time Bears standout has been a vocal critic of play at the line of scrimmage. And frankly, has been a joy to listen to as a radio analyst in recent years.

Kreutz did some deep diving into offensive line play, schemes, techniques, and more in his appearance on the Hoge and Jahns podcast. And you’re gonna want to check it out, especially if you’re the type who wants a fuller grasp on what’s happening within the Bears trenches:

We really enjoyed talking to @olin_kreutz for today's Hoge & Jahns. We went deep on the #Bears offensive line … and so much more. https://t.co/xeqVf7uPp7

Kreutz delivered a handful of eye-opening quotes that put my mind into motion.

•   A dissection of the change from Harry Hiestand to Juan Castillo and its potential impact: “When I looked at his film from the Buffalo Bills when he was coaching with Brian Daboll, who runs kind of a smilier offense to Coach Nagy, he ran inside zone and gap schemes in the same way. But maybe they just communicate better, him and Coach Nagy. Part of me wonders if Coach Nagy knows what the run scheme in his offense really is, or does he always have to count on somebody else to put a run scheme in his offense?”

•   A vote of confidence for offensive lineman James Daniels, but with a caveat: “I’m on record of saying Daniels can be a Pro Bowl player. The thing he has to show us is the same thing we’re talking about with Mitch Trubisky. Can he process information? Can he notice blitzes?”

•  Insight into why Daniels was moved off center and back to guard, and how it related to Mitchell Trubisky’s struggles: “James Daniels gets moved to left guard pretty much means you’re not doing your job. If they moved you, you’re not doing well at your job. No matter what the coach says, you’re not doing well. That’s mostly because Mitch was struggling with protection schemes and picking things up. Now, Mitch goes on stage and says: ‘Well, Cody is great at this, which basically means James is bad at that. That can strain a relationship. I don’t know if it did. I don’t know if it didn’t.”

There is so much more Kreutz gets into, so I would encourage you to give the full podcast a listen.

In the end, I came away remembering why my hope is that this group, almost as much as anything other position group on the field, gets it together and gets on the right track in 2020. Because if they can, then Trubisky/Nick Foles can be better. And if the quarterback derby competition winner to be named later is better, then the likes of David Montgomery, Allen Robinson, Anthony Miller, Cole Kmet, and others at skill positions will benefit from the improvement.

And if it doesn’t … Kreutz will be joined by many in having some sharp-tongued criticisms of what’s happening with the offense and on the line.