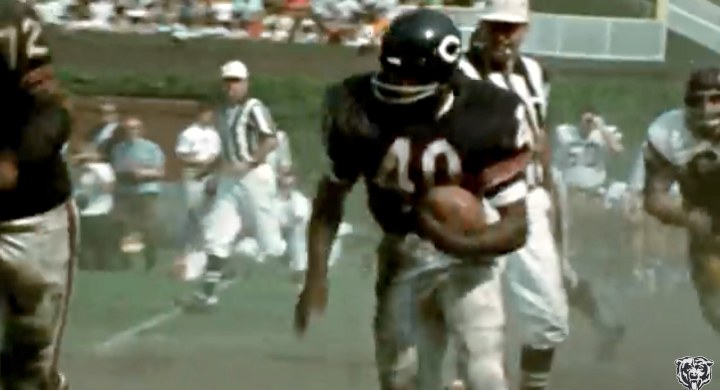 I’ve tried my fair share of restaurant copycat recipes over the years. Some have been ringing successes. Others, well, not so much. But one I haven’t tried my hand at yet is the Popeye’s biscuit. Frankly, I’m not sure it can be successfully duplicated. Maybe one day I’ll give it the old college try. Until then, I’ll continue to order them and enjoy when possible.

Today we lost a Bears great with the passing of Roosevelt Taylor.

Our thoughts are with Rosey's family and loved ones.

•   Roosevelt “Rosey” Taylor passed away at the age of 82. He spent nine seasons with the Bears and was an instrumental part of an awesome defense. He never missed a game from 1961-69, picking up 23 interceptions and four defensive touchdowns in 118 games. Taylor is also one of the most decorated defensive backs to lace ’em up for the Bears, earning first-team All-Pro honors in 1963 (a year in which he led the NFL in interceptions), second-team in 1964 and 1965, and adding Pro Bowl appearances in 1963 and 1968. Ultimately, Taylor’s greatness landed him as the 56th best player in Bears history, according to the franchise’s centennial scrapbook pieced together by Hall of Fame writers Dan Pompei and Don Pierson that was released last year as part of the celebration of the team’s 100th season. My thoughts are with his family, friends, and fans at this time.

To celebrate Gold Jacket @Kansas_Comet's birthday today, we take a look back at his 1977 Enshrinement Speech. #HBD | @ChicagoBears pic.twitter.com/Sonu4ql3Oy

•   Gale Sayers reflections on his six-touchdown game is a wonderful thing to take in:

•   There are few things I enjoy as much as watching old-school football film while sitting in the modern day. I can’t imagine keeping together aging film is easy, but the folks who restore and share old highlights are tremendous at what they do.

•   An interesting nugget from Zack Pearson of Bear Report:

Houston was one of the teams interested in Warford per reports. This could impact the Warford situation either way. https://t.co/q4cEuBCVMg

•   Indeed, the Texans were among the teams rumored to be interested in signing free agent offensive lineman Larry Warford (who remains unsigned as of this morning’s writing, by the way). There was even a line of thinking wherein Houston would sign Warford and part ways with Zach Fulton. And had those dominoes fallen in that order, then perhaps it would have been easy to envision the Bears pursuing Fulton, who has familiarity with Matt Nagy and his offensive system dating back to when the two crossed paths while on the Kansas City Chiefs. But Fulton and the Texans re-working his contract put that alternate timeline to rest.

•   Even though a splash signing by the Bears has been virtually ruled out, it is still worth keeping eyes on Warford rumors, so long as he remains a free agent. Chicago has a need. Warford represents an upgrade and a fit. Warford’s reported contract demands appear to be a factor as to why he remains on the open market. As training camps draw nearer, should Warford’s price come down, I feel like the interest will pick up. Three-time Pro Bowl offensive linemen who are still on the right side of 30 don’t tend to linger on the market too long. And yet, here we are still keeping tabs on Warford.

•   Nick Kwiatkoski chats with Tashan Reed (The Athletic) and it sure sounds like the ex-Bears linebacker is looking forward to being a full-time starter. Kwiatkoski showed he could get the job done in spurts, but was never handed an opportunity to take the full-time gig and run with it. And when Chicago re-signed Danny Trevathan, the writing was on the wall that Kwiatkoski would have to go elsewhere to get the expanded role he had been working toward while in Chicago. I (along with many Bears fans who I’ve heard from who wanted him back) wish him the best of luck on this new endeavor. It’ll be a while until the Bears play the Raiders, unless the two teams meet in the Super Bowl. Now, wouldn’t *THAT* be something?

•   An update on where the Bears stand when it comes to re-opening Halas Hall in Lake Forest comes from Chris Emma of 670 The Score.

•   Want some weekend viewing? Might I suggest you sign up for a free Disney+ trial, or perhaps a bundle with Hulu and ESPN+ (that one has the full ’30 for 30′ library, just sayin’). You’re supporting BN in the process, so thanks!

•   I’ve not been sure how I wanted to address recent events that are happening around us in this country, but some high profile players and coaches in the NFL have done a commendable job in putting into words what is going through their minds during these trying times:

The black community needs our help. They have been unheard for far too long. Open your ears, listen, and speak. This isn’t politics. This is human rights.