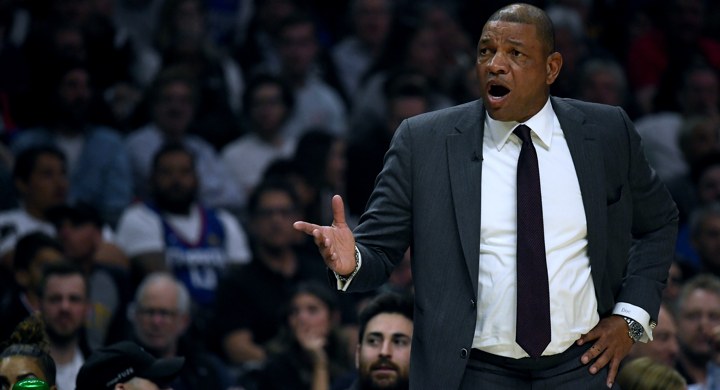 I spent a chunk of my weekend goofing around and playing video games made in 2008, which provided some much-needed entertainment as we wrapped up Week 11 of quarantine.

•   In case you missed it, Peyton Manning was the Bears’ special mystery guest who spoke with the team’s quarterbacks.

•   Indeed, that’s the same Peyton Manning who beat the Bears in Super Bowl XLI. I don’t imagine there are any hard feelings between the two sides, especially since no one on this active roster was on that team. Heck, I don’t think anyone on the roster was in the league when it happened. So that should squash any potential problems.

•   Manning isn’t the only high-profile get by the Bears during offseason meeting season. Andrew Greif of the Los Angeles Times reports that Clippers Head Coach Doc Rivers was asked by Matt Nagy to speak to the team in May and did not hesitate to jump on board. “Talking to the Bears, the whole team, are you kidding me?” said Rivers, a Chicago native. “I was jacked up about that.”

•   Does Doc know anything about quarterback scouting and development? If so, loop him in for a private chat with Mitchell Trubisky, Nick Foles, and Tyler Bray sometime this month.

•   Rivers is one of the NBA’s all-time best coaches. He has plenty of accolades, a championship ring while handling the first of the modern Big Threes in the NBA, and has been through some rough times having coached under disgraced ex-owner Donald Sterling. Naturally, the Bears were jacked up about having Rivers talk shop, too. Grief notes the team players and coaches flooding Matt Nagy’s phone with messages in hopes of getting more from Rivers.

•   Nagy loved it. “That was one of the most powerful hour-and-15-minute discussions that I had selfishly for myself and we had as a team,” Nagy told the L.A. Times. “Man, there was so much good stuff in there. A lot of the stuff I don’t even want to tell because I don’t want other people to know.” Unfortunately for Nagy and the Bears, Rivers has also talked to the Rams and Colts virtually. And both of those teams play the Bears this year. Hopefully, Rivers saved his best stuff for his hometown team.

•   Eddie Jackson is still good, too. The 2018 first-team All-Pro safety and two-time Pro Bowler ranked as the fifth best defenders in coverage in all of football, according to research done by NFL.com’s Nick Shook. Jackson ranks ahead of fellow safeties Harrison Smith (Vikings), Bradley McDougald (Seahawks), and Tyrann Mathieu (Chiefs). Any time you can find yourself in the top-10 of a list headlined by Stephon Gilmore (Patriots), you’re doing something right.

•   On the other side of the field, Bears receivers to get minimal love. Bears pass-catchers rank 22nd on Maurice Moton’s list at Bleacher Report. Allen Robinson can do only so much to keep the Bears out of the bottom of the barrel. But it’s enough to put the Bears ahead of both the Vikings (24th) and Packers (28th).

•   Here’s a fun nugget to think about. Other teams whose pass-catchers rank in the bottom half of Moton’s rankings who  show up on the Bears’ 2020 schedule include the Titans (27th), Panthers (25th), Colts (23rd), Jaguars (20th), Giants (19th), and Texans (17th). Altogether, the Bears defense has 10 games against eight teams with pass-catchers who rank among the bottom half of the league. if the Bears defense can shut down those passing games, then perhaps we’ll be in for a pleasant surprise this season.

•   It’s never too early to start prep work for the 2021 NFL Draft. And we already know you can’t have too many tight ends on your roster:

are paying TE Trey Burton $3.1M this year to play for the #Colts.

are paying TE Jimmy Graham $9M this year to replace him.

have 8 additional TEs on their roster at a combined $10.3M.

•   It’s disingenuous to tweet about the eight tight ends on the Bears roster set to make $10.3 million without adding the caveat that the team isn’t going to carry nine tight ends on its season opening roster. But it’s easier to get your Twitter dunks off that way than talk through a situation. It’s not like Twitter didn’t expand its platform to allow for 240 characters or anything.

•  Also, the Packers are paying Jimmy Graham north of $3 million to play for the Bears after their offseason release of their 2018 offseason’s marquee signing. The tight end circle of life is a fun one to navigate.

•   Yesterday, reports surfaced that Adam Amin was taking over as the new television play-by-play voice of the Bulls. As a Bears fan, you might know Amin as a the voice of preseason games the last two years. I bring it up in this space because in the Bulls’ release making Amin’s hire officially official, it is noted that Amin “also currently serves as play-by-play voice for Chicago Bears preseason telecasts.” I wasn’t sure if Amin’s move from ESPN to FOX Sports (where he is expected to provide game calls for NFL and MLB games) would keep him away from Bears preseason telecasts. I, for one, have enjoyed his preseason calls, so I hope this is a sign he is sticking around in that capacity.

•   I miss you, baseball. Please get it together and come back soon:

•   A brief Monday throwback shows a great piece of editing by the Nats camera crew: