Ryan Pace on the Team’s Mentality After Last Season Amid COVID-19: “Everybody’s a Little Pissed Off" Skip to content 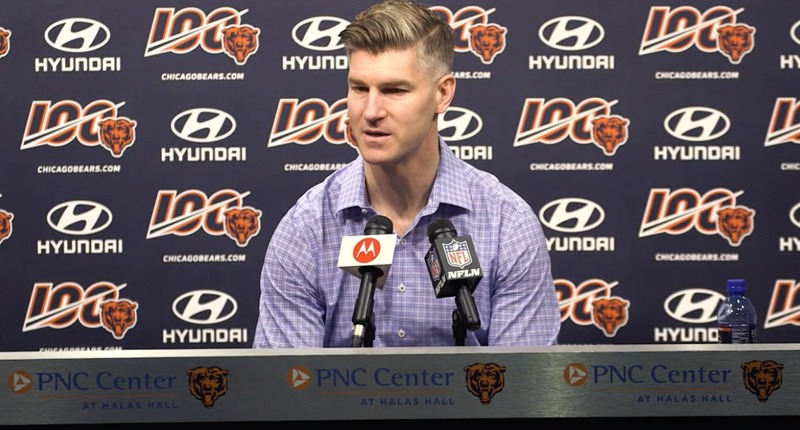 Chicago Bears GM Ryan Pace doesn’t get behind a mic often. So when he spoke at length about a variety of topics with Pro Football Talk’s Mike Florio in a recent podcast, I found myself giving it a close listen.

So while I plan on doing a more over-arching Ryan Pace Speaks post later, I wanted to highlight one thing that struck out to me the most as he opened a window into the current state of the Bears.

“The one hard part about not being together right now is that our team is in a good state of mind,” Pace explained. “Everybody’s a little pissed off. Everybody has a chip on their shoulder. And I would love to be carrying that momentum through the OTAs and through the minicamps. Unfortunately, we don’t have that and we’re going to have to pick that up in training camp when that starts, because I do feel like our team is in the right mindset right now.”

The Chicago Bears are pissed off. They should be. And frankly, I’m glad I’m not the only one who is more than mildly agitated about what happened last season.

Think about it. The 2019 season was going to usher in an era in which the Bears were supposed to capitalize on a Super Bowl window that was opened up by a star-studded defense and an offense led by a quarterback coming off a season in which he earned Pro Bowl alternate status in his second year as a pro. At this time last year, the arrow was pointed up. A year later, there are concerns at the quarterback position and questions about the team’s direction after squandering what was supposed to be a competitive season.

That Bears players, coaches, and front office members are ticked off about what happened last year is good. It means that they care about what they put out and want to do better in the coming season. That Pace called an 8-8 record in the 2019 season “unacceptable” and that the year left a bad taste in his mouth is also good. Because that means Pace isn’t happy with what he did coming off a year in which he was voted as the league’s top executive by his peers. When self-reflection results in disappointment, that’s when growth moving forward can begin. And that’s where the Bears are now. I’m curious to see how they move forward.

You can check the interview in its entirety here. And I would encourage you to do so, in part because Pace simply doesn’t do many 1-on-1 interviews. So any time anyone can get him on the record and expanding on several topics is must-listen stuff.