Bears Community Speaks Up, Envisioning What Would've Been OTAs, and Other Bears Bullets Skip to content 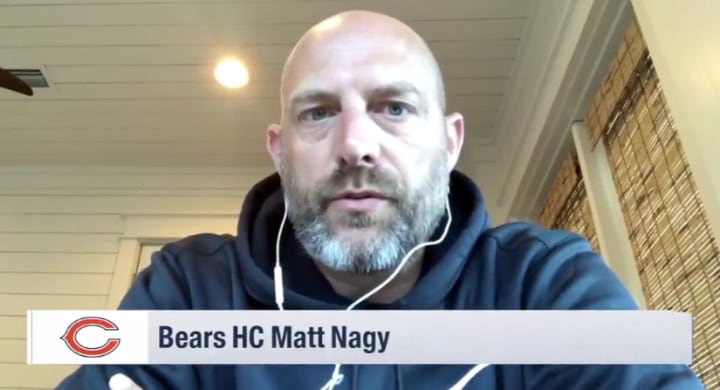 In lieu of a drawn out intro, I have one simple message: It is an easy choice to make to be on the right side of history. So just do it.

•   In the wake of George Floyd’s murder, players and teams throughout the sports realm have used social media to express grief, support for those who need it, and share feelings in what is obviously a difficult time across the board. The Chicago Bears shared this last night, via Chairman George McCaskey:

A statement from our chairman George H. McCaskey.

•   Players spoke their peace, too:

This is My Message.. pic.twitter.com/8Wufu7vp9O

It kills me to see my brothers hurting. I can’t imagine what you go through. I’m not really into lip service but know I’m committed to doing all I can to help change this human issue. “I can’t walk in your shoes but I can walk with you.” Love & positivity ✌️

•   Once football resumes, Matt Nagy, as the team’s head coach, has the challenge and responsibility to keep the guys together. But before anyone gets to that point, Nagy has set forth to be on path to being a better leader:

•   These words from Nagy hit me in my soul as he explained to Peter Schrager that he reached out to several players and team leaders in recent days: “Just let them know, number one, they have my 100 percent support. I’ve got their back 100 percent, and they need to know that. Number two was I was just gonna listen and just be quiet and let them talk.”

•   Several Bears players appeared to be moved by what was said:

•   More Bears will speak later in the week:

On Wednesday afternoon, as part of Bears OTA availability, we're scheduled to hear from Akiem Hicks and Danny Trevathan.

Not coincidentally, both players serve on the team's social justice committee and both have a level of respect and passion that can be powerful.

•   Elsewhere around the league:

Column: Anthony Lynn: 'I’m pissed off and I don’t want to just put out a pretty statement' https://t.co/x1kjj2YtOk

•   Over at NBC Sports Chicago, Cam Ellis wrote about Brian Urlacher’s response to Grant Hill on Instagram in a strong-worded piece.

•   There is no smooth transition to the rest of Bullets, but there are some football things I wanted to touch upon. So here goes nothing. …

•   If OTAs were happening this week (reminder: They aren’t, as NFL facilities remain on lock-down as part of an attempt to stem the spread of COVID-19)), Kevin Fishbain of The Athletic and Brad Biggs of the Chicago Tribune offer up a glimpse at what we might have been wanting to keep tabs on:

The Bears were supposed to be at Halas Hall for OTAs this week. Here are 64 things I’d be watching if they were practicing (free trial in the link) https://t.co/c30htkIufG pic.twitter.com/OKdTiSBKSy

The #Bears are like the other 31 NFL teams, doing the best they can to enter OTAs, where real on-field work can get going, in a virtual world.

Here are 10 things coaches & upper management would be watching closely ***IF*** they were on the field.https://t.co/gFtSRDGm2z

•   There isn’t a position group that resides within the walls of Halas Hall that doesn’t have a worthwhile storyline to follow. We know about what’s happening at quarterback and along the offensive line in high-profile position battles. We have a feel for how things can shake out in cornerback and safety showdowns. But that just scratches the surface. And that is what makes this team so compelling.

•   Here are 10 things I wish I was trying to follow if OTAs were going on as normal:

1)   An update regarding the health of Akiem Hicks, Roquan Smith, Roquan Smith, Anthony Miller, Bobby Massie, and Mitchell Trubisky, as each player missed significant time due to injury last year.
2)  Are Josh Woods and Joel Iyiegbuniwe prepared to take over the roles vacated by Nick Kwiatkoski and Kevin Pierre-Louis? Kwit and KPL were young veterans who proved they can fill in larger roles in the defense in a pinch, while also maintaining special teams excellence. The Bears’ third phase was better in 2019 than it was in 2018, but it needs to be even better in 2020.
3)  Is Roquan Smith ready to take the next step? This is a big year for a player who was a top-10 pick in the 2018 NFL Draft. Smith has flashed in a big way, but there have been some points in his development where he has sputtered. I want to see him put together a full season of excellence. And as far as I am concerned, that begins in the summertime.
4)  I’m going to live for Darnell Mooney updates throughout the summer. The rookie receiver from Tulane did work as a receiver catching passes from less-than-accurate QBs. I suppose some would say that gives him a leg up in trying to haul in throws from Mitchell Trubisky, whose accuracy left much to be desired in 2019. No matter who is throwing the ball, I’m curious to see how the speedster’s game translates to the pros.
5)  Someone has to take Taylor Gabriel’s spot in the starting lineup … right?
6)  Cole Kmet has been praised at seemingly every turn since he was drafted. And the Notre Dame product was highly regarded by many during the pre-draft process. Yet, I am left wondering how he can show that the hype is real on the field.
7)  I’d like to hear from Jimmy Graham. Specifically, how he has taken on the challenges of an offseason in which he was discarded by the Packers just two years into a three-year deal. Graham has long been a force in the NFL, but his skills appear to have diminished in recent years. How a player handles aging will go a long way toward career longevity. And if Graham is going to have a successful third act to his NFL story, it will have to begin in Chicago.
8)  The 2018 Bears featured four first-team All-Pro performers in safety Eddie Jackson, pass-rusher Khalil Mack, cornerback Kyle Fuller, and return specialist Tarik Cohen. In some respects, each of those players had “down” years in 2019. Or, to put it differently, didn’t totally match their 2018 production. Jackson, Mack, Fuller, and Cohen are still young enough to be considered in the prime of their respective careers. Thus, I don’t believe 2018 was some sort of outlier fluke of a season. I’m curious as to how each of these guys can work their way back to 2018 form. Because even if they don’t reach their peaks, being that much better than they were in 2019 could be the difference between going 8-8 and 9-7 or 10-6.
9)  Even though Eddy Piñeiro ended the 2019 season strong, I want to know how he is doing entering the start of the 2020 season. The Bears brought in competition for Piñeiro, who comes into 2020 as the incumbent favorite instead of a challenger on even footing in an open competition.
10)  The Bears have a Yale guy who is from South Africa and has a background in rugby fighting for a spot among the class of undrafted rookie free agents. Tell me more, please!

•   And that is just a small snap shot of what is running through my mind.

•   I’ve been looking forward to this: