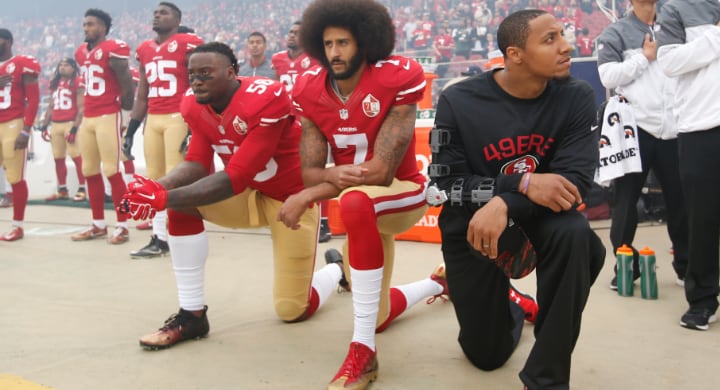 Earlier today, New Orleans Saints quarterback Drew Brees made some very poor comments while speaking with Yahoo Finance that have … not been met kindly around football (or the world in general). During an exchange about Colin Kaepernick (and others) taking a knee in protest of unwarranted police brutality against unarmed black citizens, Brees said that he “will never agree with anybody disrespecting the flag of the United State of America or our country.” Which, yeah, that’s not the point. We’ve gone over this enough.

And indeed, Brees’ teammates and contemporaries took it upon themselves to explain what Brees is obviously missing.

Here are some of the messages:

I recorded a few videos when thinking of how to respond to Drew Brees, I don’t take any of it back-I meant what I said-I removed the 1st video because I knew it be more about the headlines. I want people to understand how those of us struggling with what’s going on feel pic.twitter.com/T054qt0YEz

A snippet from the first video Jenkins made (and has since deleted)  is embedded below:

"I considered you a friend, I looked up to you, you're someone I had a great deal of respect for, but sometimes you should shut the f*ck up." pic.twitter.com/KPHinGuQR7

Teammate Malcolm Jenkins wasn’t the only one to speak up since Brees’ comments with Yahoo Finance.

So tragic that the narrative, yet again, is being hijacked. Do we not have relatives fighting for our country? Did our grandparents and other ancestors not serve for the U.S.? The flag represents liberty, and justice for all right. Well we aren’t getting that! https://t.co/GQWQV5lZs8

A few years ago we were criticized for locking arms in solidarity before the game. It has NEVER been about an anthem or a flag. Not then. Not now. Listen with an open heart, let’s educate ourselves, and then turn word and thought into action. #wakeupamerica #itstimeforchange #loveoverfear❤️ #solidarity #libertyandjusticeforall #all

He’s beyond lost. Guarantee you there were black men fighting along side your grandfather but this doesn’t seem to be about that. That uncomfortable conversation you are trying to avoid by injecting military into a conversation about brutality and equality is part of the problem https://t.co/ON81UsOWPw pic.twitter.com/HH3EVTIH8p

This is a disgrace! To speak about your grandfathers as if there weren’t black men fighting next to them.Those men later returned to a country that hated them. Don’t avoid the issue and try to make it about a flag or the military. Fight like your grandfathers for whats right! https://t.co/qag3Igic3V

Let us stay focused on the issues that unite us. We are standing united to bring an end to systematic racism and address police brutality, especially against blacks people. If the conversation isn’t about that, it’s a distraction and isn’t helpful at this current time.

In the end, it’s clear that the message behind peaceful protests by way of kneeling was all about systemic racism and police brutality and not about the military, the American flag, or the national anthem. Period.

Earlier today, Akiem Hicks talked about (among other things) being afraid to lose his job had he decided to kneel as a show of protest. But after seeing players speak up after Brees’ comments today, I feel as if the message is coming across more clearly and in bigger numbers.