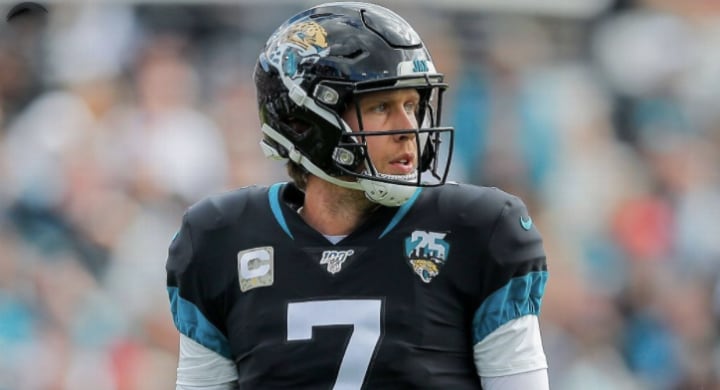 There’s an old adage in football that states when your team has two quarterbacks, it really has none. And while I’ve long co-signed on that concept, part of me loves a good old-fashioned quarterback competition.

As someone who’s covered QB battles at the high school and college level (and now pros, I suppose), I can attest to how compelling an honest-to-goodness battle to be QB1 can be. So as far as I can tell, the Chicago Bears’ competition between Mitchell Trubisky and Nick Foles should be one that resembles an old school battle, because of their many different strengths and styles. But in Chris Simms’ eyes, it’s Foles who will have a leg up in the showdown.

After ranking Trubisky as the No. 38 quarterback on his top-40 list, Simms placed Foles at No. 31.

By ranking 31st, Foles is viewed, at best, as a certified NFL starter who is capable of playing complimentary football. Foles is on the lower end of that spectrum of starters, but would check in as a high-end backup. Admittedly, it’s not the best place to be. But it’s not the literal worst, I guess.

More importantly, it’s an improvement over where the Bears were at the end of last season, where a few plays going differently could have turned an 8-win season into a 9- or 10-win campaign. And if you let Simms tell it, Foles is the starting-caliber NFL QB best suited to fit the Bears’ win-now window.

It’s not even about how Foles uses his tools to get to this level, which makes him all the more interesting. Simms is quick to note that Foles’ arm is “good” but not special. And that if he were to tank it among the league’s 32 starters, he would rank among the bottom third. But it’s the ease in which he makes plays that stands out most. And more than that, it’s what Foles doesn’t do that should probably be a central focus of this conversation.

“He’s not going to leave a lot of yards, or completions, or plays that were there to be had on the field,” Simms said of Foles. “He usually maximizes or optimizes that.”

If you close your eyes while listening to Simms’ explanation, you can understand why Foles checked in as No. 16 at this time last year. But the arm strength being middle of the pack at best and limited athleticism puts a ceiling on what Foles can do, and goes a long way toward explaining why he is 31st on this list and just behind Gardner Minshew II — the quarterback whose presence made Foles expendable in Jacksonville.

The great QB battle of 2020 won’t be won on Zoom or in virtual meetings. But Foles’ veteran know-how going up against Trubisky’s superb athleticism presents itself as one of the classic showdowns that’s as old as football itself. Let the competition begin!