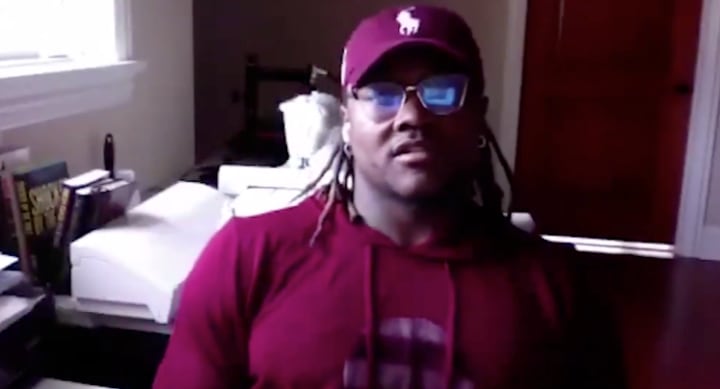 We shared an expanded look at some of the more powerful things said by Akiem Hicks and Allen Robinson on Wednesday as part of an eye-opening day of honesty and truth-speaking.

Or as Hicks put it, a level of healing was achieved.

You can read, watch, and hear it from a Bears player (and coach) perspective below.

•   Linebacker Danny Trevathan also spoke and delivered some strong and heartfelt words from his unique perspective. In an impassioned interview with media, Trevathan delivered two messages that stood out most to me.

The first was this one, highlighted by Dan Wiederer of the Chicago Tribune:

Danny Trevathan: "What you do in the presence of fear and the presence of danger and evil is what you will be judged on. I don’t know about you all. But I don’t want to get to the gate and have to turn back around. I’m trying to help everybody come with me."

We’re getting a lot of words from athletes and other high-profile people right now. And that’s good. It’s a start. But actions moving forward will be as important as the words that are said now.

This message, shared by Kevin Fishbain of The Athletic should hit home for parents:

Like Allen Robinson and Akiem Hicks, Bears LB Danny Trevathan offered open, honest and powerful thoughts with the media today. Here he is talking about his mother as well as his two daughters pic.twitter.com/GIHdEVks1i

Oh, yeah, and there’s this:

Bears LB Danny Trevathan helpfully reminds us that we're in the middle of an earth-shattering pandemic that could kill us all, "Let's not forget about corona, bro."

You can check out more from Trevathan here:

•   Things were going to be challenging for the Bears this upcoming season.

Quarterback competition. Battles for starting gigs at right guard, cornerback, safety, and wide receiver were going to be up for grabs. Depth spots vacated by key reserves was a storyline I was looking forward to following. Working through those football things was going to be a challenge with all things being equal. Doing them in a pandemic added a new hurdle. And add in what we are going through as a society, it’s a lot. But based on how Nagy, Robinson, Trevathan, and Hicks have talked through things in recent days, I have confidence that whatever happens will happen with everyone moving in the same direction and working together. It’s all we can ask for at this stage.

That is why it is important that Matt Nagy opened up (in addition to being the one spear-heading the important aspect of listening to his players). Nagy said it best when he said: “Football is extremely secondary. We have to get life right.” Some things are bigger than football.

You can give Nagy’s words a listen here:

Nagy and every coach across the sports spectrum has quite the challenge ahead of them in being in charge of bringing a team together. And after watching Nagy’s Zoom conference, I had the same takeaway as Bear Report’s Zack Pearson, who tweeted this:

Biggest takeaway from hearing #Bears HC Matt Nagy speak today. He gets it. He truly gets what is going on right now in this country and is doing everything he can to help in any way he can. Some really powerful words from the head coach today.

•   Listening, understanding, and yielding the floor to his players are among the most important things a coach can do right now. And Nagy is doing them and maintains he will continue to do them. Good on him. And when he says “What the players want to do, we’ll do. We’re gonna listen. We’ll talk through it. Then whatever we all decide to do, or they decide to do, we’ll do that,” when asked about kneeling during the national anthem or showing some sort of demonstration or protest, I hope he follows though. Ultimately, I hope he becomes an example for other coaches as we collectively move forward.

•   Larry Mayer’s roundup from Wednesday’s press conferences on the Bears’ official website is worth your time, too.

•   One day after Drew Brees’ comments were met with criticism from his teammates and peers, the New Orleans Saints quarterback turned to Instagram to offer up an apology:

I would like to apologize to my friends, teammates, the City of New Orleans, the black community, NFL community and anyone I hurt with my comments yesterday. In speaking with some of you, it breaks my heart to know the pain I have caused. In an attempt to talk about respect, unity, and solidarity centered around the American flag and the national anthem, I made comments that were insensitive and completely missed the mark on the issues we are facing right now as a country. They lacked awareness and any type of compassion or empathy. Instead, those words have become divisive and hurtful and have misled people into believing that somehow I am an enemy. This could not be further from the truth, and is not an accurate reflection of my heart or my character. This is where I stand: I stand with the black community in the fight against systemic racial injustice and police brutality and support the creation of real policy change that will make a difference. I condemn the years of oppression that have taken place throughout our black communities and still exists today. I acknowledge that we as Americans, including myself, have not done enough to fight for that equality or to truly understand the struggles and plight of the black community. I recognize that I am part of the solution and can be a leader for the black community in this movement. I will never know what it’s like to be a black man or raise black children in America but I will work every day to put myself in those shoes and fight for what is right. I have ALWAYS been an ally, never an enemy. I am sick about the way my comments were perceived yesterday, but I take full responsibility and accountability. I recognize that I should do less talking and more listening…and when the black community is talking about their pain, we all need to listen. For that, I am very sorry and I ask your forgiveness.

•   I am a firm believer that people can change. In my soul, I feel as if everyone can learn from mistakes, missteps, miscalculations, etc. And at my core, I maintain that there is good in everyone and that we can always be better. My hope is that Brees’ apology is less about wanting to look good from a public relations perspective and more about actually being better. Brees’ words were not taken lightly by the NFL community. His actions and how he goes about things moving forward will speak more than any social media apology post.

•   Josh Alper of Pro Football Talk has details of Vic Fangio’s apology, as the Broncos head coach (and former Bears defensive coordinator) said he was wrong to say there’s no racism in the NFL after hearing reactions from inside and outside the organization.