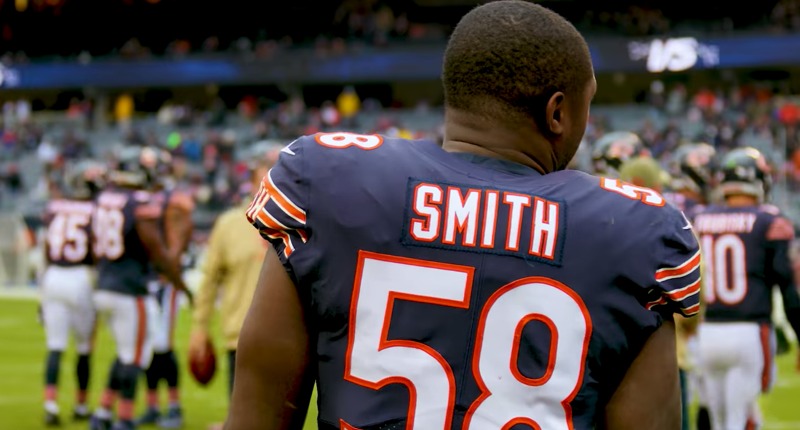 Accomplishing mundane achievements is one of those things that is keeping me moving in the right direction these days. For example, I took a healthy chunk of time to marvel at my back yard after setting it up to simulate what it would look like if I were to host a socially distanced BBQ later this month. Again, it’s mot much. But it’s not nothing. Victory is mine!

•   Give the people want they want:

Wouldn’t hate if the @ChicagoBears brought this back as their primary logo, tbh pic.twitter.com/7V7VWaDqfD

•   According to SportsLogos.net, this Chicago Bears logo was the franchise’s primary one used between 1946-1973. It’s not the greatest stretch in franchise history, but it yielded championships in 1946 and 1963, as well as two other postseason appearances (including a loss in the 1956 championship game). So it’s not like the logo is some sort of bad-luck charm.

•   I see this logo and I think of its versatility. The Bears could put this on anything — caps, t-shirts, polos, pullovers, bumper stickers, bags sets, etc. — and it would all sell like hotcakes. Heck, you could put it on hotcakes and those would sell, too. Yes, I realize there are bigger things happening in football and the world right now. And a marketing push is the last thing on people’s minds. But my offer, as inspired my our frents at the Midway Minute, is a simple one: Consider bringing this logo back and putting it on everything. Please and thank you very much for your time and consideration. Go Bears.

•   While we’re sitting in the way-back machine, the folks at NBC Sports Chicago took some time to remember the 10 most important Bears from the Super Bowl XX season.

•   How important will Roquan Smith be to the Bears’ next championship team?

•   Smith tackled everything that moved while at Georgia. It’s why, despite the decreased importance of inside linebacker play with regards to the general success of a defense, Smith was a mortal lock to be a top-10 pick. Through two seasons, Smith has done a lot of what he did while at Georgia. The guy is a reliable tackler who uses speed and instincts to make plays. That pectoral injury shortened a season that seemed to be improving as the weeks went on, but the flashes are so much fun to watch.

•  I’ll be curious to see how Smith’s play picks up in 2020. It’ll be a big year for the UGA product, especially since the offseason that follows will come with the Bears facing the decision on whether or not to pick up the fifth-year option on his rookie contract. Only one of Ryan Pace’s first-round picks has had said option exercised. But since the Bears let Leonard Floyd go this offseason, that means none of Pace’s first-rounders will have played in Chicago on that option. So I guess there’s no better time for the first, eh?

•   All things considered, that’s a pretty bad sign for Pace’s grade that his first-rounders aren’t seeing second deals with the team that drafted them in the first place. What makes it even more uncomfortable is that they’re all top-10 picks. Kevin White. Leonard Floyd. Mitchell Trubisky. Those guys should have been the core of something special. Instead, White is out of football, Floyd is playing Year 5 as a pro with the Los Angeles Rams, and Trubisky is set to slug it out with Nick Foles to win the starting quarterback job. Sigh. I did *NOT* want to go down this rabbit hole today.

•   On a lighter note, the gang over at Windy City Gridiron come together to discuss which current and former Bears players would you like to have a beer with. The weekend forecast in Chicago calls for good beer-drinking weather. But only if (1) you’re 21 or older and (2) drink responsibly.

#Bears have rolled through one week of (virtual) OTAs and there is a lot going on.

Along with @danwiederer & @ChiTribKane, we did our best to capture it in the Bear Download podcast. Give us a listen.https://t.co/1zlx8pRV5U

.@LaurenceWHolmes, @JJStankevitz and @KingsleyEllis have a meaningful discussion about inequality in America, with comments from Akiem Hicks and Allen Robinson.

•   A powerful message has been sent by a bevy of prominent NFL players in what feels like a turning point moment at the intersection of sports, culture, and society:

•   It’s a who’s-who of NFL stars. Patrick Mahomes. Deshaun Watson. Odell Beckham Jr. DeAndre Hopkins. And others. All speaking up to send a clear message to the NFL: “We will not be silenced. We assure our right to peacefully protest.”

•   And clearly, the message was received as the NFL posted a new message later Thursday night:

This is a time of self-reflection for all – the NFL is no exception. We stand with the black community because Black Lives Matter. Through Inspire Change, the NFL, Players and our partners have supported programs and initiatives throughout the country to address systemic racism. We will continue using our platform to challenge the injustice around us. To date we have donated $44 million to support hundreds of worthy organizations. This year, we are committing an additional $20 million to these causes and we will accelerate efforts to highlight their critical work. We know that we can and need to do more.

•   Understand that the NFL won’t be able to un-do the damage it has done over the years overnight. But if it is truly committed to doing right by its players, then this message sent through its social media platforms will be remembered as a first step in the right direction.