Maybe the Bears Offensive Line Isn’t a Lost Cause? Whitehair and Massie Earn Praise From PFF Skip to content 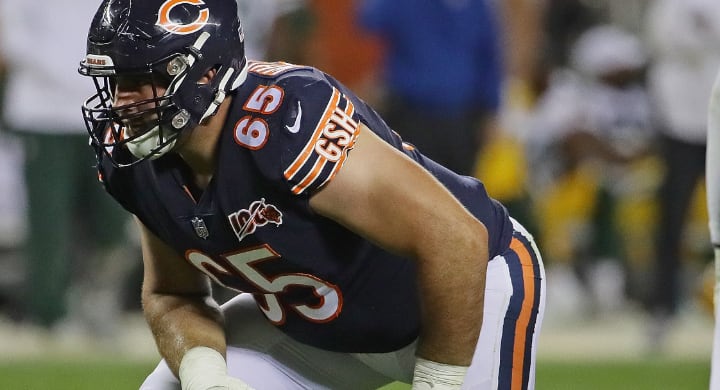 After last season’s performance, the Chicago Bears’ offensive line is a cause of stomachache for many.

But what if it doesn’t have to be?

To be sure, the Bears’ collection of offensive linemen have a ways to go before earning the trust after a dud of a 2019 season. And while the team is putting an awful lot of faith in new Offensive Line Coach Juan Castillo to get the most out of four returning starters and right guard who will emerge from a summertime competition, it should be pointed out that Castillo isn’t working a big blob of nothing.

Two Bears offensive linemen caught the eyes of PFF’s analytical team recently. And that they did it for positive reasons is all the more encouraging.

Ben Linsey ran through each NFL team’s most underrated player going into the 2020 campaign. There are several players who immediately come to mind as potential candidates for this exercise, but Linsey circles center Cody Whitehair as the Bears’ representative for his post. Linsey’s reasoning is two-fold, and worth diving into.

Whitehair finished with a career-worst 64.9 grade in 2019. But let’s remember that he spent a healthy chunk of the season at left guard, which was part of an experiment that moved James Daniels to center. It was a move that sent both players back to their original positions, but one that was ultimately unsuccessful. Moving Whitehair back to center full time could be a move that gets the Bears’ line moving back in the right direction. Since 2016, Whitehair’s 79.8 grade when playing center ranks as the eighth best. Compare that to his 68.1 grade at guard, then you can see why his move back to center should be permanent.

And remember, Daniels has played his best ball at left guard in his first two years. Daniels was a standout performer as a rookie at the position, and looked far more comfortable (and played better) there after the switch off from center. Daniels earned a 73.9 grade from PFF when lining up at left guard in 2019, which is far better than his 63.2 grade at center.

Linsey also put together a team of the NFL’s most clutch performers. Using Pro Football Focus’ data, Linsey opened our eyes to the league’s best performers in fourth quarter and overtime. And no right tackle was better than Bobby Massie.

Massie missed a good portion of the back end of the Bears’ schedule due to an injury. But even when he was healthy, Massie struggled and posted a less-than-desirable 63.2 grade. HOWEVER, that tells just part of the story. As Linsey points out, Massie graded as the best qualifying right tackle in the fourth quarter and overtime of one-score games. That Massie edged Ryan Ramczyk, the New Orleans Saints tackle who was a first-team All-Pro in 2019, speaks volumes about how well the Bears’ right tackle performed in the guts of the game.

One of the most frustrating things about offensive line play is that it is difficult to evaluate, especially since there isn’t a catch-all statistic like there is at any number of other positions. Only adding to the frustration is that Chicago’s line is only a year removed from being talked about as being in the top third of football. There is talent and a track record for each of the Bears’ returning starters. And while it’s asking a lot to bank on bounce-back years from everyone, that this group isn’t too far removed from being more than serviceable suggests that said bounce back isn’t out of the realm of possibilities.

Re-imagining the offensive line as a strength for the 2020 Bears might be difficult to envision, but maybe it shouldn’t be.