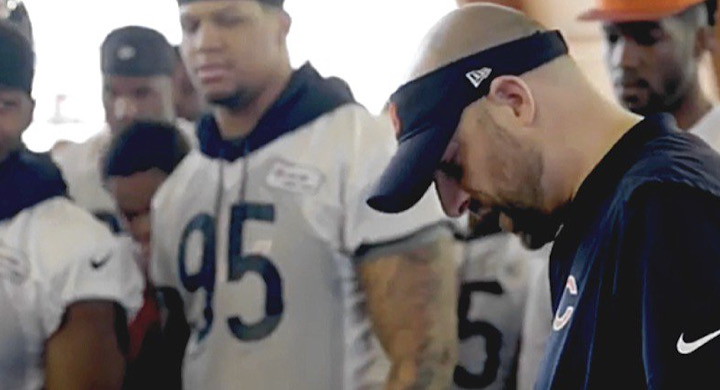 The Chicago Bears are set to pivot from the virtual aspect of offseason training to the physical side of things.

Matt Nagy announces that the #Bears are going to end their offseason program a week and a half early. He's happy with what they've accomplished virtually. This will allow the players to focus on training and not have to worry about meetings.

The Bears have done everything they can from a virtual perspective, so Head Coach Matt Nagy decided to end the offseason program early. Things will come to a close on Thursday, while Larry Mayer of the Bears’ official website tweets rookies will continue to do virtual work as part of their program

The decision to end their offseason program is an interesting one — and it’s probably one I’m certain we’ll look back at if things don’t go as well as the Bears would like in the 2020 season. Because without traditional practices, the only thing left to do from a prep work standpoint is to dive into all of the non-contact stuff that is possible. That includes (but is not limited to) learning the playbook, communication with new teammates, training, and things of that nature.

That Nagy is cutting a week off virtual training to allow for players to have more time to do physical training is an important distinction to make. I’d have worried if Nagy were doing this for other reasons, but I can see where it makes sense to do it and allow players to focus on the physical aspects of building their bodies. Without access to Halas Hall, players are responsible individually for getting into game shape on their own time by their own means. And if you take that into consideration, you could understand why Nagy made this decision.

And yet, I’m a bit uneasy thinking about it. That’s because part of me wants to push pedal to the floor after a disappointing 8-8 season and an offseason that brought in new players at key positions. A piece of me wants these guys to get everything thrown on their plate because there isn’t an option to do in-house workouts at Halas Hall.

But maybe there is something to be said about not overloading everyone from a mental capacity. If you’ll recall, Nagy canceled player meetings in honor of Blackout Tuesday a week ago. And in the time that has passed since, we’ve watched the likes of Akiem Hicks, Danny Trevathan, Allen Robinson, and others pour out emotional conversations. Nagy has talked about the gravitas of the recent team discussions, and it’s possible that’s another reason that is baked into this decision.

In any case, Nagy feels as if his players have taken enough from a mental side of things and is ready for them to pivot toward getting back into the physical stuff. Striking a balance between the two was going to be a challenge no matter how the time was divided, so I’m not sure there is a right or wrong way to go about this particular offseason workout situation.