A Continued Push for Change, Love for the Coach, Neutralizing Cousins and Cook, and Other Bears Bullets Skip to content 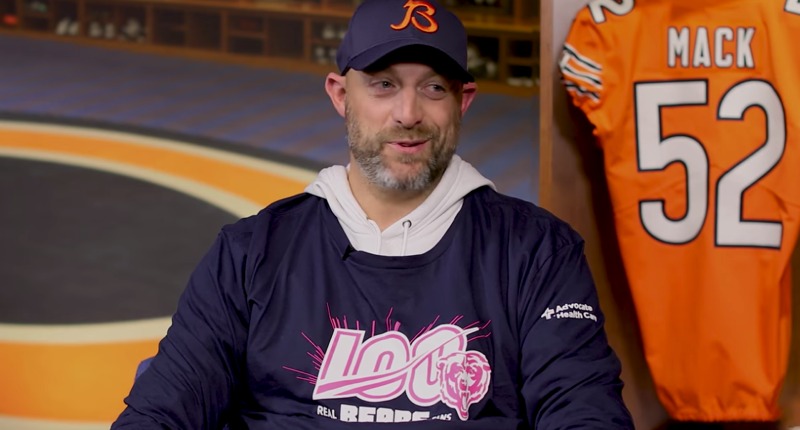 Remember that whole global pandemic thing? Yeah, we’re still battling that as a society, and I still finding myself reading stories from the New York Times, like this: How to Have Friends Over [during a pandemic]. Life is weird.

•   Former Bears linebacker Sam Acho and Bears Chairman George McCaskey teamed up to deliver a video message as they tried to do their part to end the racial divide currently happening in this country. It’s mighty powerful, so you should check it out:

•   Over at The Athletic, Bears Safeties Coach Sean Desai penned an op-ed with a call for change:

“Let’s face our own biases and work to improve them. Let’s educate and communicate. Let’s open our minds to factual information and dialogue.”

•   My friend Adam linked me to this podcast featuring some quality self-reflection from Iowa football reporters and a thorough discussion of race and the football program. This comes off the heels of James Daniels shedding light on racisim within Iowa’s football program over the weekend.

•   Moving on to some on-field football things …

•   The Hoge and Jahns podcast tries to explain why Matt Nagy ended the virtual offseason program:

•   I had mixed feelings about the decision. On one hand, I imagine there is a limit to what can be done virtually. Yes, I understand that there are endless possibilities in which to instruct and teach in this way. However, I also have a grasp that there is only so much the mind can take before things start running together. So right now, I lean towards Nagy making the right move based on not wanting to overload guys at this point on the football calendar.

•   That the decision was made to allow players to focus their efforts on the physical part of training is important, too. Let’s not lose sight of the fact that players have been unable to do their normal training at Halas Hall since it has been closed since March. And while video training will ultimately prove to be a valuable tool, getting in physical shape is also important. Nagy putting and end to the virtual wing of the offseason prep tour to give players time to work on the physical is actually quite sensible. I hope it’s a decision that proves right down the line. I’d hate to have to re-visit it throughout next offseason.

•   FWIW: It wasn’t just the Bears winding down the rest of their offseason program. ESPN’s Dianna Russini tweets the Giants, Titans, and Colts (all teams the Bears are scheduled to play this season) are closing up shop by Friday.

New Bears TE Demetrius Harris says on a Zoom call that he has been working out with Mitch Trubisky, Allen Robinson, Tarik Cohen David Montgomery and others.

•   Some love for the head ball coach:

•   An interesting perspective from JJ Stankevitz (NBC Sports Chicago) on why the Bears should hope the Vikings succumb to Dalvin Cook’s requests and give him a ridiculous contract extension. Because while there is no doubting Cook’s talents, ability, and upside, he isn’t the perfect running back. Cook hasn’t been durable, as he has yet to play a full 16-game season in his first three years as a pro. And from a matchup perspective, Cook is averaging just 2.5 yards per rush in three games against the Bears. Wait … why do the Vikings want to pay this guy again?

•   Baseball is holding a condensed version of its draft tonight:

I set the table for today @BleacherNation.

Because we assume so much of the Cubs pick hinges on which top 14 dude drops, this should be an especially fun draft to watch unfold.https://t.co/Igiin8XwAq

•   Ear buds, water bottles and tumblers, and more are your Deals of the Day at Amazon. #ad

•   Mixed in some Bears chatter with a heavy dose of baseball talk with Greg Braggs Jr., Fat Mike, and Joey 2 Scoops on @ChiFansInTheStands:

•   The Outsiders Reunion Show with my friends Danny and Michael was certainly a trip:

Inside Outside the Ivy https://t.co/N4Oe1PIXm0