Mitchell Trubisky Speaks: Not Earning the Fifth-Year Option, Playoff Motivation, Still "My Team," and a Lot More Skip to content 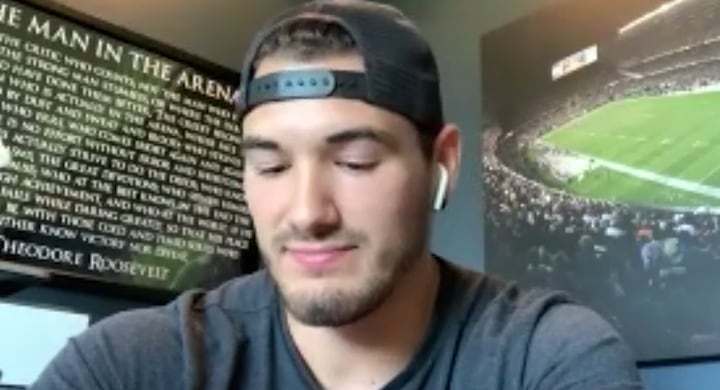 In his first conversation with Bears reporters since the end of the 2019 regular season, Mitch Trubisky had a lot to discuss.

We know Trubisky was pissed off (and motivated) by the team’s decision to trade for Nick Foles. But he touched on a variety of other topics, too. We’ll share some of the highlights and chime in with some commentary, while also embedding Trubisky’s full Zoom conference call with reporters below. In the meantime, enjoy.

•   Trubisky’s reaction to being thrust into a quarterback competition obviously generated the most headlines, but it wasn’t the only thing he was miffed about. He openly discussed the team’s decision not to pick up the fifth-year option, a move that he knew was coming days in advance before word made rounds to the media. But his openness about not earning that fifth-year option stuck with me, in a good way:

“I kind of felt like I had it coming. I mean, I put myself in their shoes. If I was looking at myself, I feel like I would have to go out and earn that option. I feel like the way I played last year didn’t merit that, so I wasn’t all that surprised.”

•   I appreciate the rare moment of honesty in which Trubisky shared that self assessment. Since he was drafted, we’ve heard John Fox say Trubisky played his best game in a three INT game, Matt Nagy say his QB was improving while referring to a two-week stretch in which he averaged 181.5 yards per game and threw 4 TDs to 1 INT, and Ryan Pace discuss the quarterback’s strengths (which were viewed as weaknesses by the head coach). So this was quite refreshing

•   And sure, not getting the option picked up and having to beat out Foles to retain his spot as QB1 are motivating factors. But Trubisky said they weren’t the only ones.

“What motivates me now is coming back off last year and getting this team back to the playoffs. Having a better record than 8-8. And playing to the potential that I know myself, and the rest of my teammates, can play at.”

•   Ready for some more truth bombs from Tru?

.@Mtrubisky10: "We need to get back to the playoffs. And we need to have a different mentality then we did last year. We let a lot of details slip and we didn’t play the way we should have been playing. We lost a lot of games we should have won."

•   An admission that the team didn’t play as well as it could have, lost games it should have won, and didn’t have the attention to detail it had the previous year is damning, but also refreshing. It also pains me to think about how 8-8 could have easily been 10-6 all over again. Blregh.

•   Trubisky’s thoughts on the upcoming battle for the QB1 gig:

“I think it’s going to be a good competition. Foles has had a crazy career as well, so it’s been cool having him in our room talking ball. I know we’re going to push each other, but I still feel like this is my team. I’m excited for the competition and to just get back on the field with my guys and show everybody what I can still do and how hard I’ve been working this offseason.”

•   Trubisky made it clear that his relationship with Foles is a good one. And that’s important, because Foles has stated that he wants to be a good teammate to Trubisky even though he wants the starting quarterback job for himself. But that Trubisky wants to be the dude on the front lines leading the charge strikes the right chord. Learning from a vet can be valuable, but that value won’t be realized if he can’t beat him out for the job.

•   I couldn’t help but think about the last time a starting quarterback declared it was his team when pushed by a newcomer. Mostly because it was Trubisky who pushed him out in the first place. Will history repeat itself? Time will tell, I suppose.

•   Trubisky already has an idea where he can snag an edge in the competition:

Trubisky asked by @MikeBermanNBC about having a QB competition without OTAs:

•   That’s an interesting perspective. I would say Trubisky’s biggest advantage is in having prior relationships with his teammates and the ability to lead off-campus workouts with the guys.

Hard to miss the messaging behind Mitchell Trubisky today: "The Man in the Arena" which begins, "It is not the critic who counts…." pic.twitter.com/PoIdOPnD8M

•   Trubisky made a reference to being “in a good mental space” entering this year. That’s good. It’s easy to get bogged down in the negativity. And when you’re playing the most important position in all of sports for a heritage franchise like the Bears and for a fanbase hungry for a winner (and competent quarterback play), I don’t imagine it’s easy to escape the rabbit hole once it is dug. Getting in a good head space feels like a good first step toward a better future for Trubisky.

•   Oh, and he believes better days are coming.

“Just go out there and earn my next contract, wherever that is. I want it to e here in Chicago. I’m going to play my heart and soul out for this team and give it everything I’ve got.”

If you want to catch it all in its entirety, here it is: