Trubisky and the "B" Word, Jackson Puts in Work, Where's the Speed? And Other Bears Bullets Skip to content 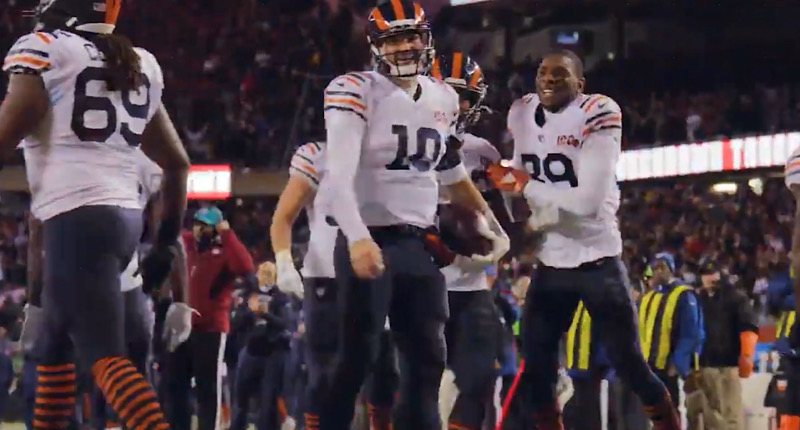 I’m going to spend some time later relaxing and listening to some old George Carlin stand-up because it’s been a while and I feel like it’s a good time for it (Michael: Big fan of that plan).

•   The Bears announced that quarterback Mitchell Trubisky will speak at noon. I’m sure he’ll give us something to write about. Maybe I’ll do a Periscope from the patio later in the afternoon and we can talk some Bears. We’ll see.

.@Rodney_Harrison doesn't mince words, regarding the #Bears and Mitchell Trubisky.

LISTEN for more from Harrison, @JJStankevitz and @KingsleyEllis on the latest Under Center Podcast!

•   … even if I don’t agree with Harrison’s assessment that Trubisky and Ryan Leaf are on the same level of draft bust. I get it. Harrison played with Leaf. So therefore, he should know what a bust looks like. HOWEVER, Leaf never played as well as Trubisky did at any point in his career. Playing as well as Trubisky would have been an improvement of monumental proportions for Leaf, who finished his career with more than twice as many interceptions (36) than touchdowns (14) in his three-year career that lasted all of 25 games.

•   I’m curious if Harrison is a prisoner of the moment. Because in August 2019, Harrison said he believed Trubisky could take the Bears to the Super Bowl. Seriously. These were his words: “I look at them last year, they allowed him to throw the football down the field and be more aggressive. I think he can take this team to the Super Bowl, I think that’s how good he can be.”

•   So … which is it? Is Trubisky a bust because you know one when you see one? Or is he good enough to take a team to the Super Bowl?

•   I’m not saying thoughts and feelings can’t evolve over time based on game tape and data that becomes available for us to pick apart, sort through, and analyze. I certainly know my perspective on Trubisky (and his future) changed based on how he performed last year (and given the context of three years worth of starts). But I’m irked that an analyst can go from believing Trubisky was good enough to take a team to the Super Bowl to him being a bust because you know one since you played with one. If that’s the case, shouldn’t that have been brought to the table last August?

•   I found this interesting

That’s not a good list to be on https://t.co/GXJyAJB1EO

•   A couple of things come to mind here. For starters, the Bears need more speed. Not for the sake of it, but to make plays happen on the edge. The mere threat of speed beating a guy deep or to a spot on the field can make a defense adjust its game plan. That’s what speed does. But the bears need game speed more than timed speed. I think having timed speed helps. However, I’m quick to remind myself that timed speed doesn’t equal game speed.

•   Seeing the Bears on this list is another point in favor of shifting the offense’s focus to run less 11 personnel (1 RB, 1 TE, 3 WR) and more 12 packages (1 RB, 2 TE, 2 WR). Based on what the Bears’ roster currently looks like, playing out of 11 personnel as a base package doesn’t make sense because the team doesn’t have the personnel to match. If Chicago decides to run more 11 personnel than 12 in 2020, that’s a coaching decision that should be red-flagged.

•   Extended thoughts from Tarik Cohen, who had some encouraging words regarding what Trubisky is doing this offseason:

Some interesting perspective from @ChicagoBears RB Tarik Cohen on Mitch Trubisky’s demeanor with a QB competition looming, how Trubisky is throwing the ball in the workouts he (Mitch) has organized locally, and his reaction to the Nick Foles acquisition and integration so far: pic.twitter.com/mRWPzGkfWh

•   UGH! This reminds me that I did not commit to quarantine yoga like I said I would:

•   While he’s away from the game, Jackson continues to put in work:

The gap in performance between Patrick Mahomes and Mitch Trubisky is rather large.

Want an education in the difference between them?@btrossler uses video examples of them running the same plays to illustrate just how wide the gap ishttps://t.co/pRJuhgux2a

@The_Dream99 brother. You were the best DT that I ever had to face. I appreciate your competitiveness and attitude towards the game of football. Always had a blast playing against you, win or lose.

A memo that went to NFL teams today: pic.twitter.com/XsKpDmQ6UT

Eddie Jackson: “They don’t try to hold us back. They give us their advice, they state their opinions but they always like to listen. I feel like that right there was huge for us.”

Bears players have the backing of the organization to speak out. Story https://t.co/dAir9URf2r

•   A reminder that we are still in the midst of battling through a pandemic:

•   Football is a contact sport. But as John Harbaugh points out in his interview, football is a communication sport. It is also a sport where there are nearly 100 men share a locker room. Social distancing protocols are important. But some of the measures make football very difficult to practice.

For a little light-hearted Friday-fun … Here Are Your 2019-20 Chicago Bulls Merit Badges!https://t.co/DhuPs8vGoV