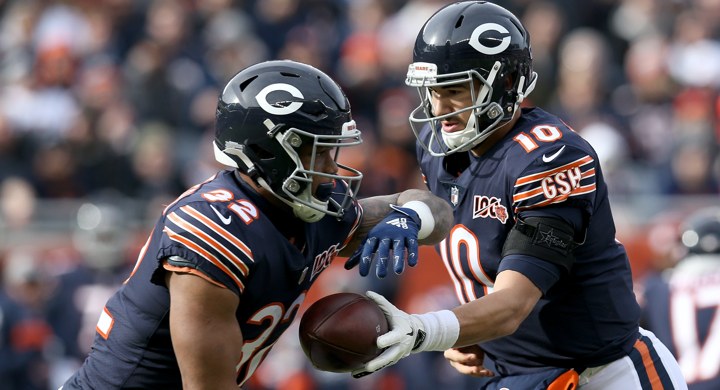 Earlier today, the Chicago Bears announced that running back David Montgomery and Nick Williams (now with the Detroit Lions) were the team’s recipients of the Brian Piccolo Award.

The honor is bestowed to one Bears rookie and one veteran player who best represent Piccolo’s courage, loyalty, teamwork, dedication, and sense of humor, and is voted on by players. Usually the award is announced and presented in April, but was postponed due to the NFL shutting down facilities as part of an effort to stem the spread of the COVID-19 pandemic. In a normal year, the award’s recipients get some time to talk about it with reporters.

Of course, this year is far from normal with facilities still being closed. That left Montgomery to meet with the Chicago media in a different way. And while doing so, Montgomery added another morsel of information regarding the great quarterback derby of 2020:

David Montgomery accepted the Brian Piccolo Award in a virtual ceremony parked outside a workout with Mitchell Trubisky and Bears teammates.

"I'm just going into this second year more clear-minded, more focused than ever and ready to help this organization win a Super Bowl."

Part of me chuckled reading Chris Emma’s tweet about Montgomery meeting with the Chicago media in a Zoom call, doing so while taking a break from working in a throwing session with Mitchell Trubisky. And then I stopped when I realized that two of the biggest X-factors for the 2020 season are working out independently of the team ahead of the season. Sure, it’s commonplace these days to have quarterback leading team workouts away from the facility. But Trubisky seemed to believe it is an advantage for him to be able to do so. And that Trubisky is still doing it days after virtual OTAs came to a close is even more intriguing.

I can’t predict the future. So I don’t know if this June prep work will ultimately help Trubisky win the quarterback competition. But it will not be lost on me that Trubisky appears to be doing and saying all the right things this offseason. It might not mean much, but there is a non-zero percent chance that it doesn’t mean nothing. Talk is talk. And it’s not as if Trubisky’s effort or work ethic have ever been questioned since he arrived in Chicago in 2017. But perhaps this offseason of adding extra motivation to an already unquestionable work ethic will play out in a way that it helps Trubisky become the best version of himself for the 2020 season by looking like a player worthy of being the first quarterback to come off the board in 2017. If it does, it will make for a twist in Trubisky’s career arc that Bears fans will easily embrace.