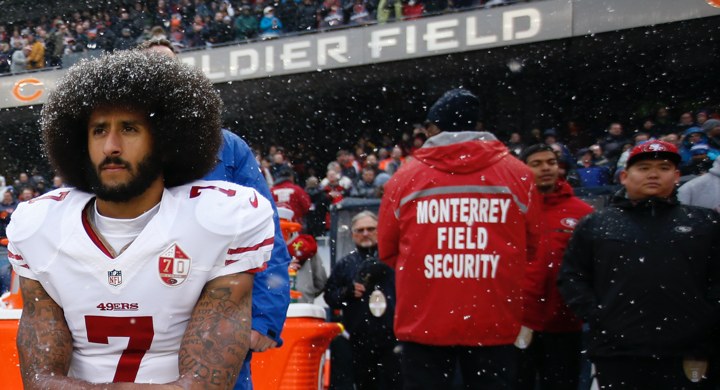 It’s the latest front-facing push from Goodell, who has inched forward with actions and words ever since a collection of NFL stars pushed the league to speak as loudly as they were against racial and social injustice.

Previously, Goodell has publicly stated “we were wrong” for not listening to players when it came to issues of racial injustice. The league has also since pledged to donate $250 million over 10 years as part of its efforts to battle social injustices faced by African Americans. And while I feel these measures represent a step in the right direction, Goodell hadn’t mentioned Kaepernick, whose protests were ignored, ultimately playing a role in keeping him out of the league since the end of the 2016 season.

And in a timely follow-up, Mike Sando of The Athletic sorts through each of the NFL’s 32 teams in search of a fit for Kaepernick:

For what it’s worth, Sando views the Chicago Bears as a team that should consider signing Kaepernick. Even with Nick Foles and Mitchell Trubisky battling for the starting gig, Sando believes replacing Trubisky with Kaepernick would be defensible and even preferable, albeit unlikely.

This brings me back to something I wrote in November 2019, after the NFL arranged to host a Kaepernick showcase tryout in Atlanta and each of the league’s 32 teams were invited to attend the event. Because while we didn’t know if the Bears would be one of the teams taking up the invite, they should have taken the opportunity to truly evaluate Kaepernick as an option.

Here is a snippet of what I wrote at the time:

“To be clear, there is no reason not to be in Atlanta to see Kaepernick’s workout. Quarterback is the most important position in the game, if not all of professional sports. There are only 32 starters and about 64 quarterbacks in the league. So to *NOT* attend the workout of one who was successful in the league would easily be classified at negligent (and that goes double, given the Bears present situation). Indeed, with all the rumors about Mitch Trubisky’s future and the numerous suitable replacements that have popped up in recent weeks, it shouldn’t be a matter of *IF* the Bears send someone, but who will go.”

Kaepernick’s return to the league is contingent on two things: (1) His desire to play professional football in a league that outcasted him, turned away from his protests, ignored what he was fighting for, and is only now coming around to supporting his cause nearly four years later and (2) a team actually willing to give him an opportunity to sign for a reasonable deal (and in a legitimate opportunity), commensurate with his level of talent and expected productivity. For the sake of this post, let’s say Kaepernick wants to play in the NFL again. That takes care of one part, but doesn’t solve the other part of the equation that would make it whole. But exploring Sando’s piece in The Athletic shows that there isn’t any shortage of ideal fits to accommodate Kaepernick’s return.

But specifically, in the Bears’ case, there is more of an argument to bring in Kaepernick for competition’s sake rather than as a token gesture. As I wrote back in November, one of the most disheartening items addressed in the must-read piece of 2019 was details surrounding the process that led the Bears to draft Trubisky instead Deshaun Watson or Patrick Mahomes, underscored by GM Ryan Pace not doing the same due diligence with Watson as he did with Trubisky or Mahomes.

So not giving Kaepernick a fair shake would be a similar trip down the road of not doing your due diligence in evaluating the most important position on the field. And if that’s how it played out, I maintain that it would be damaging to make the same mistake twice. And with expanded rosters that can accommodate 55 players, there is even more of a case to carry a third quarterback.

Yes, I understand Kaepernick hasn’t taken a professional snap in 1,263 days. And because of that, I would fall short of going full tilt toward pushing the Bears to sign him. But considering the state of the position and its current options, the least Chicago’s front office can do is give it fair consideration.