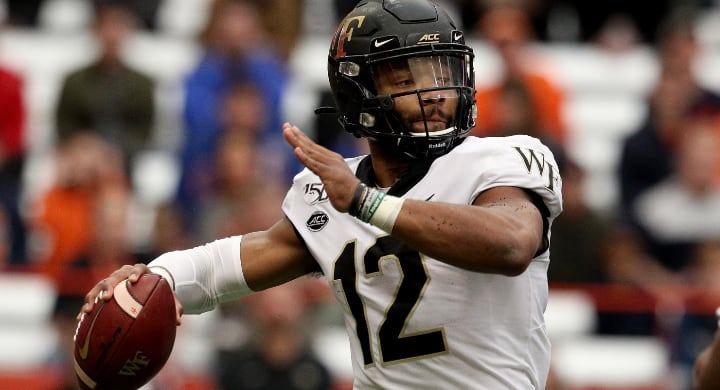 We’re still closer to the 2020 NFL Draft than we are to its 2021 edition, but that isn’t stopping anyone from looking forward to what’s on the horizon.

For example, Pro Football Focus already dropped its 2021 NFL Draft positional rankings. Because, yeah, we’re months away from college football’s scheduled kick-off, but there’s nothing wrong with getting a leg up on figuring out which players we should be keeping tabs on. And of course, that starts at the top with the quarterbacks. And while Trevor Lawrence (Clemson), Justin Fields (Ohio State), and Trey Lance (North Dakota State) are at the top of the board, Brock Purdy (Iowa State) and Jamie Newman (Georgia) rounding out the top-5 speaks to the potential this quarterback class possesses. Perhaps the 2021 NFL Draft will be a good one in which to draft a quarterback.

For what it’s worth, Draft Wire’s ridiculously early two-round mock envisions the Bears taking Georgia’s Jamie Newman with the 14th overall pick. And in the second round, the forecast calls for Chicago to select Clemson offensive tackle Jackson Carman. It’s not the only spring-time mock sending a quarterback to the Bears. And take it for what it is (a mock draft in the dog days of the preceding offseason), but R.J. White of CBS Sports also has the Bears taking Newman in the first round with the 16th overall pick. It’s part of a draft in which four quarterbacks go in the top-20.

It shouldn’t come as much of a surprise to see all these quarterbacks come off early from projected boards early. Mel Kiper Jr.’s post-2020 Draft Big Board has three quarterbacks (Lawrence, 1; Fields, 3; Lance, 15) among his 25 highest-ranked prospects for 2021. Matt Miller’s Big Board at Bleacher Report also features  three quarterbacks in the top-25, but with Fields (24th overall) ranking behind Lawrence (1st overall) and Lance (4th overall).

As you might have noticed by now, many of the way-too-early looks have a Bears-centric focus on the offensive side of the ball. Particularly at the quarterback position. That’s not a coincidence.

The way I see it, this speaks to the talent that is bubbling underneath the surface at the college level, as well as obvious concerns over the position in Chicago. Fortunately, the next draft appears to be loaded with play-makers on the offensive side of the ball, especially at quarterback, which is encouraging for fans of a QB-starved franchise such as the Bears.

And even though college football isn’t at the top of anyone’s mind at this moment, it’s nice to know there will be some talent worth watching ahead of a year in which Chicago will have its first-round pick. Don’t get me wrong. I enjoy the draft. But it is infinitely more fun to look ahead to it knowing the Bears are in possession of their own pick.

Unfortunately, the fact that we’re already looking toward 2021 says a lot about how we might indirectly feel about the 2020 season. That we are borderline obsessively looking at quarterback options says everything you need to know about the current state of the position in Chicago. Reflecting about how much time I spent browsing through pass-catching options tells me that the Bears’ current collection of talent at the position isn’t where it should be. Thinking about how I jotted down offensive tackle possibilities raises my levels of concern regarding the bookends of the offensive line. All that to say, yes, I’m digging what’s on the horizon, but doing so while also having a fair level of concern regarding the here-and-now is a bit unnerving.

Don’t get it twisted, though. I’m still looking forward to what the 2020 season brings the Bears. It is a make-or-break season for so many players, coaches, and front office members. So much so, there should be no shortage of storylines worth following in the year to come. It’s just that the uncertainty of a more distant future is something we should keep in mind, too.