Are We on the Doorstep of a Riley Ridley Breakout? Skip to content 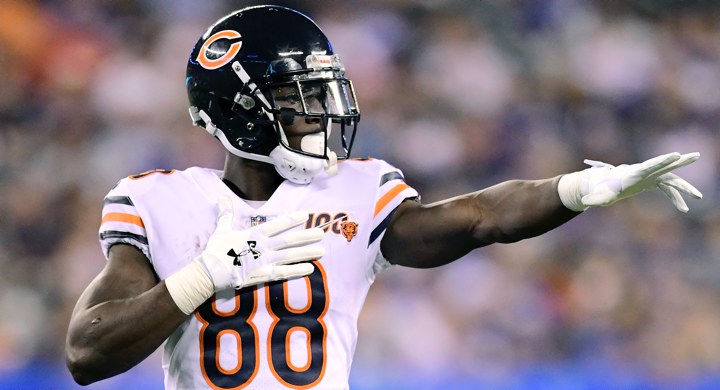 Entering the 2020 season, the Chicago Bears’ wide receiver corps leaves much to be desired. Sure, Allen Robinson is a stud (albeit one too often underrated and overlooked). But the depth behind him is littered with questions.

Or so most would claim. But if you let WRs Coach Mike Furrey hold the mic, one of those questions is going to be answered with a break-through season from an unexpected source.

Furrey certainly seems to believe the Riley Ridley breakout is coming up on the horizon:

Bears WR coach Mike Furrey is typically a straight shooter. Candid and direct. To hear him gush this morning about Riley Ridley’s approach, passion and Year 2 potential is noteworthy.

Bears WRs coach Mike Furrey: "I think the one thing I’m really excited about right now and I’ll be honest with all of you, I think the biggest growth we’re going to see from anybody in our room is going to be Riley Ridley."

Furrey believes the biggest growth in the position room is going to come from Ridley, a second-year player with a unique prospect pedigree, some untapped upside, and an opportunity to climb up the depth chart.

The Bears drafted Ridley in the fourth round of the 2019 NFL Draft, which was a bit of a shock to some. In many corners, drafting Ridley was viewed as a luxury pick because the Bears already had Robinson, Anthony Miller, and Taylor Gabriel entrenched at the top of the depth chart. Oh, how those things can change in the matter of a calendar year. But in other corners of the football world, the selection was seen as a value pick. If you’ll recall, Pro Football Focus ranked Ridley as its 71st overall prospect in the 2019 draft class. And as far as I’m concerned, getting a top-75 prospect with pick No. 126 is a tremendous value.

Soon enough, Ridley will be presented an opportunity to show off how the Bears came away with a potential steal in the 2019 NFL Draft. That’s because the players ahead of him on the depth chart have a certain amount of questions that need to be answered. Does Ted Ginn Jr. still have the speed bursts that can make him a valuable deep threat? Can Anthony Miller stay healthy? What can Darnell Mooney bring to the table as a rookie? What is Javon Wims’ role in the receivers room?

Unfortunately, Ridley didn’t get much of an opportunity to show off his skills last year. If he did, we might not have the same concerns we have now about the room. But Ridley suffered a training camp hamstring injury, then struggled to get meaningful snaps (even as Gabriel missed games due to concussions). The 2019 season served as more of a redshirt year for Ridley than anything else. And that’s fine, so long as that year turned out to be a useful building block for the coming years. Should that be the case, then this summer could be the first step toward Ridley making good on his position coach’s prediction.