Well, At Least One Person Still Has Hope For Adam Shaheen Skip to content 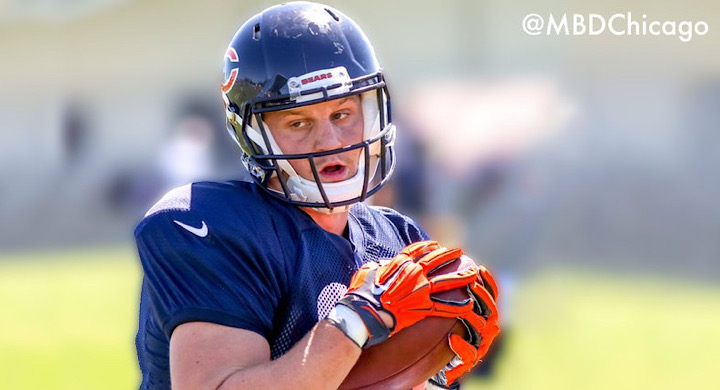 With a tight end depth chart that features newcomers Jimmy Graham, Cole Kmet, and Demetrius Harris, it’s easy for Adam Shaheen to get lost in the mix.

And yet, new TEs Coach Clancy Barone still has Shaheen on the mind. In fact, he still has high hopes for the 2017 second-round pick as he enters his fourth year with the Bears.

#Bears TE coach Clancy Barone says he still thinks Adam Shaheen has a bright future and has plans for him in the offense."

On one hand, I’m willing to allow Barone to have time to work on Shaheen.

As a believer in the idea that new eyes can go a long way toward fixing old problems, I’m totally here for Barone getting his hands on a player who has yet to fulfill the potential that comes with being a second-round pick who had the moniker “Baby Gronk” placed on him as a prospect. To be clear, this isn’t blind faith and belief that something good will happen because someone new is here to guide the way. Instead, it’s an openness to the idea of a different coach and style bringing the best out of a player whose best we have yet to see.

Then again, we’re talking about a position coach, who could be a soothsayer of sorts, but shouldn’t be expected to be a savior. Also, Barone represents Shaheen’s third different position coach in four years. How many different position coaches need to come through Halas Hall until Shaheen starts scratching the surface of his potential? And how much more time does Shaheen need to develop? I realize progress isn’t always linear, but I’m not even sure where exactly we are on Shaheen’s development arc. Last we saw of Shaheen, he was a healthy scratch. Then, weeks later, he was placed on injured reserve. And in April, Shaheen was rumored to be on the trade block. Clearly, there were no takers, which has me thinking that none of this is particularly good news for Shaheen.

Part of the reason we’re having this conversation is because Shaheen has missed 21 games over the last three seasons due to injury. But even when healthy, he hasn’t produced on the field. Shaheen’s career stat line (26 catches, 249 yards, 4 TD) is what one might expect out of a small portion of games. Instead, those numbers represent what Shaheen has done through 27 games in three seasons. Hence, Shaheen now finds himself behind Graham, Kmet, and Harris on the depth chart. That leaves Shaheen battling the likes of J.P. Holtz, Ben Braunecker, Jesper Horsted, Eric Saubert, and Darion Clark for reps. And ultimately, all those names in one position group leaves Shaheen battling for a gig in the NFL.

I suppose I’m glad that someone still has faith in Shaheen and is willing to work with him as he embarks on his biggest challenge as a pro. And yet, I have this strange feeling of déjà vu while writing about a coach dreaming on Shaheen’s upside in June. Previously, that upside has gone unreached by the time we’re reflecting in January. We’ll see if this year will be any different.