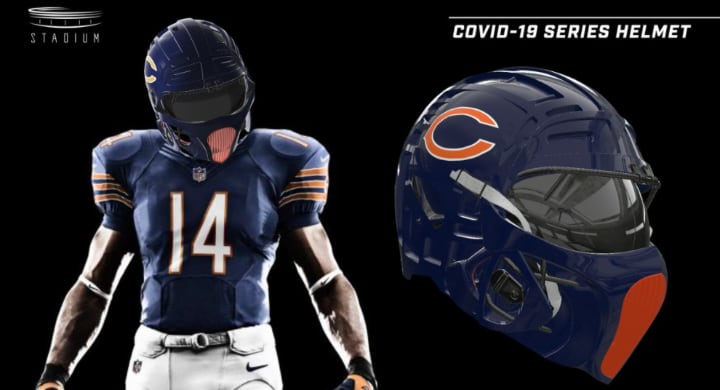 Because there was a report of progress and new proposals after a productive meeting between MLB Commissioner Rob Manfred and MLBPA Chief Tony Clark, I spent some time tweeting about a hypothetical Chicago Cubs lineup for 2020 instead of having to reply to tweets about baseball’s looming death. That was refreshing. Now, bring on the sports chatter that revolves around games and not surrounding billionaires and millionaires splitting dollars.

•   We are currently in one of my favorite times of the year as a football fan. It’s the time when hope springs eternal and dreams of greatness in the year to come are rooted in optimistic coaches who have nothing but good vibes regarding their players’ futures. Adam Shaheen? He’s got a role in this offense and a bright future, according to his third position coach in four years. In search of a second-year breakout receiver? Look no further than Riley Ridley, says WRs Coach Mike Furrey. It’s June. And we are three months away from the scheduled kick-off of the season. Let the good vibes roll while they can.

•   A collection of thoughts that have me dreaming of big things happening for the Bears:

New Bears offensive line coach Juan Castillo is excited to get working with Germain Ifedi: "He's been working his ass off. I am excited about him."

Juan Castillo is pounding on a table to make a point, and the Zoom camera shakes when he does.

Bears LBs coach Mark DeLeone on Danny Trevathan: “Prior to his injury last year he was playing the best ball he’s ever played.”

DL coach Jay Rodgers on Eddie Goldman: “I think he is a premier nose tackle in the NFL. … There’s a big difference when he’s not in the game."

•   Look … I understand the reasons behind the skepticism throughout the Bears’ fan base. But a new year brings a clean slate. And while I would never tell anyone how to fan, I do suggest clearing your mind, stepping away from last year’s utter disappointment, and allowing yourself to let this team get to work. Allow this team to work on its own merits instead of viewing them through the prism of last year’s disappointment.

•   Speaking of the need to clear your mind:

Because Mitch Trubisky was rehabbing his shoulder earlier this offseason, he was in the building a lot. John DeFilippo thought it was too much and told him: "You need to get away … you need to clear your mind for a couple weeks."

•   We’re no strangers to Trubisky being obsessive over his work. Sometimes, I wonder if it’s too much for his own good. As we discussed last year: Honing your craft is one thing, but it’s something else to be so “in” on it as not to let the game breathe.

•   This is a big year for the Bears as a whole. The general vibe surrounding the team is that it is ticked off about last year and is aiming to show the fall to 8-8 was a fluke. Should this team prove that the 2018 season wasn’t some sort of mirage, we’ll probably look at the 2019 season as a turning point and the lead-up to 2020 as being something that helped the team shake off the doldrums of complacency. No matter what happens, I’m here to see this through. Hopefully, it will be in the most entertaining way possible.

Still trying to figure out why Roquan Smith would have a 'chip on his shoulder': Bears LB coach Mark Deleone says "We all watched "Last dance, Right? I'm not saying he's Micheal Jordan, but I think there's something to it in motivating himself." (Same concept)

•   As we have previously discussed, Roquan Smith has a lot to prove. He had a solid rookie year and seemed to be turning a corner in the second half of his second season before a torn pectoral brought Year 2 to an end. Good health, a laser focus on the year ahead, and some motivation from basketball’s G.O.A.T. could all come together in aiding Smith’s best year ever. And if it happens, the timing would be great (especially from Smith’s perspective).

"He's training like I've never seen anyone train before. he's preparing to be as good as he possibly can be before the season starts.." #Bears OLB coach Ted Monachino on Khalil Mack.

•   I hope this sense of urgency isn’t actually a sense of desperation from a side of the ball that feels it needs to be perfect in order to overcome the short-comings of the offense.

A story from Zoom OTAs: #Bears DL coach Jay Rodgers had his daughter hide behind him while quizzing his players one day. When someone got a question wrong, she'd bang a gong. Took 2-3 missed questions for players to realize what was going on.

•   The Bears are observing Juneteenth as a holiday on Friday, closing their offices as part of an effort to learn more about the holiday, celebrate it, and move forward in their efforts to fight for equality. For more on what Juneteenth is, I found this link helpful and worth sharing.

•   These new Stormtrooper helmets are wild:

Will the new #Bears offensive assistants fix Mitchell Trubisky AND the run game?@JJStankevitz @LaurenceWHolmes and @KingsleyEllis react to they had to say to the media yesterday.

New: Colin Kaepernick is joining the board of Medium and launching a new interview series for the site with athletes and activists, tentatively called "Conversations with Colin" https://t.co/LmGN8CFYqk

•   I had seen some tweets suggesting that President Donald Trump believed it was time to give Donald Trump another shot at playing in the NFL. I’m wary of expanding on snapshot quotes on hot-button topics without providing context. Thankfully, Field Yates of ESPN does just that with the president’s full answer:

President Trump on whether he believes Colin Kaepernick should get another chance in the NFL: “If he deserves it, he should, if he has the playing ability.”

•   Are you ready for some college football?

Details on the plan in our original story last week https://t.co/6iioMDIc51