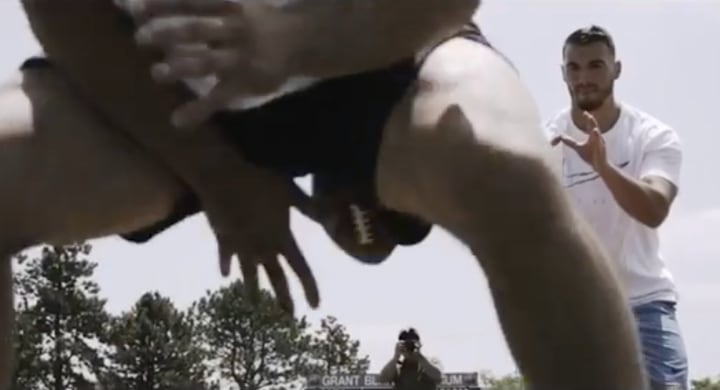 Jeff Christensen has been coaching quarterbacks since 1990. And ahead of Super Bowl LIV, Adam Jahns of The Athletic wrote a piece on the long-time quarterbacks coach that caught my attention.

What reeled me in was the angle featuring a well-regarded quarterback guru who probably had the most invested in the Super Bowl for someone who was essentially a neutral bystander. Christensen, who runs the Throw It Deep quarterback and receiver school in the suburbs, had put in a bunch of work during the developmental stages of the respective careers of Patrick Mahomes and Jimmy Garoppolo, the quarterbacks who dueled in the Super Bowl. I left Jahns’ story not thinking about the missed opportunities the Bears had to draft Mahomes or trade for Garoppolo, but instead, wondering why Mitchell Trubisky hadn’t been connected to working out with a quarterback coach outside of the facility.

Months later, it seems to have happened:

In this training clip by George Gaza featuring David Montgomery, Cole Kmet, Allen Robinson, and others, there are moments in which Trubisky is seen working with an older gentleman working on some quarterback things. And as Erik Lambert of Sports Mockery points out, that person is Christensen.

Seeing this video brings a smile to my face. Trubisky can talk about being “pissed off” all he wants after the Bears traded for Nick Foles and declined the fifth-year option on his contract, as it means nothing unless he can channel that energy toward making himself a better player. And while time will tell if that’s the case, it’s definitely noteworthy that he is taking to the practice field with his teammates with vigor, and with a highly accomplished quarterback coach who can provide guidance.

To be clear, Christensen isn’t a miracle worker. His helping Trubisky isn’t going to turn him into Garoppolo or Mahomes. But putting in the work behind the scenes in the developmental process is the most important aspect of being a quarterback. Mahomes and Garoppolo have talent and athleticism, but it doesn’t take a brilliant football mind to realize that the work they put in helped them along the way. Trubisky has his own set of skills. What working with Christensen will do for him remains to be seen. But that he is working with him appears to be a good first step.