Cohen Explains it All, the Castillo Factor, Dad's Day, and Other Bears Bullets Skip to content 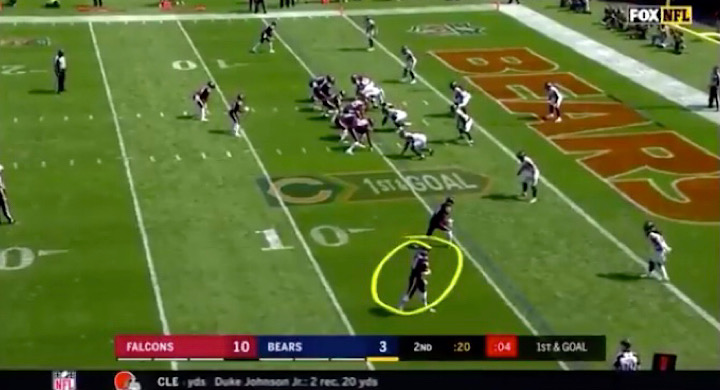 My musical vibes have been all over the map this weekend.

Blink-182’s “The Mark, Tom, and Travis Show” was in my head throughout the day on Friday. At night, I started to watch the Taylor Swift “Lover” tour special I DVR’d, but fell asleep before finishing. I listened to some older Kanye West stuff on Saturday evening, but then transitioned to putting together a playlist of the songs he sampled and listened to that to close my day. What today will bring is anyone’s guess!

•   A Happy Dads Day message from Zach Miller and the Chicago Bears:

•   This morning featured breakfast by yours truly for me and my pops. Pancakes, scrambled eggs with ham and cheese, and biscuits. Steak dinners on the grill tonight. I’ll let him decide on lunch, because I’m taking a nap after I wrap up Bullets.

•   What a wonderful video:

•   I got a kick out of Tarik Cohen breaking down plays:

Backside pursuit was tooooo fast , i had a hole front side , don’t know if i woulda made it tho . Cut back on the long hair dude and turned it into a foot race . Broke a couple tackles , shoulda scored . Didn’t know buddy was behind me https://t.co/outv3SsbWf

So at first I’m thinking like they punting from their end zone so imma have space to work , since they’re going to try and protect the punt . So basically I’m catching the ball regardless and no fair catch .

Watch 71 on the defense . He took me off my track . I was supposed to go to the frontside . But couldn’t get in there because of him .

Don’t know why but i thought somebody was behind me bro . Another one i wish i he back . Prolly coulda scored . https://t.co/xbD2PIK6Qn

I’m so mad but it’s still etched in history wit this video lmaoo shout out to JB for the block !

Why you not verified no more ?

•   To be self aware and have a sense of humor when the moment calls when your own team’s fans are calling out your decision making takes some real gumption. I like it. Can we get more of this? Players breaking down their own games would be an absolute treat. Throw it on a YouTube channel and call it a day. You’re welcome for the free idea, Bears.

All other runs
55 carries
2.95 yards per carry https://t.co/YtxHkNRMYj

•   Maybe the Bears should re-think how they use Cohen in the running game.

•   An improved offensive line would do wonders for Cohen, David Montgomery, and anyone else asked to carry the ball this year. So with four of five starters from last year’s disappointing showing are slated to return to the spots they were in a year ago, that leaves a lot on the plate of new Offensive Line Coach Juan Castillo. Adam Hoge (NBC Sports Chicago) writes about why Castillo is the most important newcomer to a room that features two new free agents, two seventh-round picks, and two rookie undrafted free agents.

•   It’s not as if this group of linemen is without talent. Charles Leno Jr. and Cody Whitehair were Pro Bowlers after the 2018 season. James Daniels graded well as a guard during his rookie season and again as a second-year player after being moved off center, per PFF’s analysis. Bobby Massie was good in the biggest moments. It’s not hard to envision this group as a strength if they add a steady presence at right guard and prove last year’s showing was a blip on the radar and not the start of a disturbing trend.

•   Add this to the list of this offseason’s most unexpected stories:

Eagles TE Dallas Goedert was taken to the hospital after being sucker punched at a South Dakota restaurant Friday night, a league source confirmed to @Tim_McManus.

He has since returned home and is "fine," a source said. https://t.co/oPndDd63RE

This offseason NFL teams got to know each other through video meetings, phone calls, remote gym sessions — and whatever else they could come up with.

In these virtual/remote times, teams went high-tech for bonding.

•   Other than winning the NFC North, hoisting the George S. Halas trophy, and winning the Super Bowl, moving up to No. 1 on this list should be a top priority:

Per @YouGov, Bears are the third most popular team in the UK; 5th most famous American football team.

•   I don’t think the Vikings are an option if Kyle Long is to return to football:

Kick off a new season with the @RamsNFL and @Chargers August 11 on @HBO. pic.twitter.com/OhqOESTEUv

•   This makes me feel uneasy and less confident about football being on the horizon in 2020:

In all, 23 Clemson football players tested positive for COVID-19.https://t.co/baGAAD79cy

•   For the record, I’m holding out hope. I’ll maintain a glimmer of optimism until the day it is unfeasible to do so because that’s simply my default setting. But I’m also a realist, which allows me to see that there is no easy path to a return to football.

•   Great Eero WiFi system deal today, at 33% off plus a free Echo Dot. We have and use both, and they are swell. #ad