Remember When Jordan Howard Truck-Stick'd a Dude? And Other Bears Bullets Skip to content 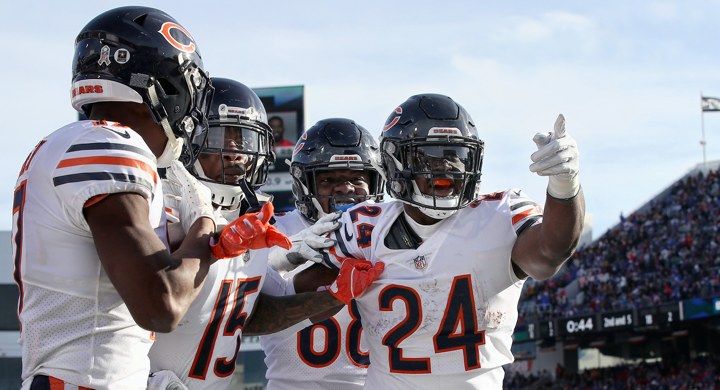 I had a wonderful time at the lakefront on Sunday. There’s something about a lakeside breeze, the sound of water crashing onto concrete, and it crossing your feet that is undeniably good for the soul. Summer is here. And I am so, so, soooo ready for it.

•   While thinking about the Bears’ running backs room, I found myself remembering Jordan Howard. Then it hit me as hard as Howard hit this poor, defenseless Bills defender on his way to the end zone:

Remember when Jordan Howard hit the truck stick on some poor Bills defender? That was fun. pic.twitter.com/9o3zXWU2ka

•   Based on the comments, replies, quote tweets, and retweets, you guys miss Howard, too. I get it. For starters, he was the team’s best offensive player during an otherwise awful offensive stretch. Howard ran for 1,313 yards (a Bears rookie record), was known to be a hard worker, and said the right things even as his role diminished in 2018. That Chicago’s offense thrived down the stretch with Howard carrying a load suggests there is room for a back to eat. It’s just that he needs the opportunities to chow down. Those opportunities didn’t come for Howard’s replacement, David Montgomery, last season. Hence, the running game struggled.

•   An odd thing for me, personally, is that I can still understand why the trade was made. Recent history is littered with running back extensions teams almost immediately regret. So while Howard is a perfectly cromulent running back, I can understand the Bears trying to move on from Howard a year early than a year late because logical thinking reminds us that running back shelf lives are short and the drop-off can be painful to watch. In a way, trading Howard while getting some draft compensation as part of a move to a younger and more cost-efficient option is a sensible move. But Howard was productive on bad teams, so part of me wishes he would have gotten a chance to strut his stuff for a better team and for a longer period of time.

•   More than that, he looked pretty good for the Eagles. Howard proving there is room for the running game in Matt Nagy’s offense was damning of GM Ryan Pace’s move to deal him in the first place … but also provides a glimmer of hope that Chicago can get it right with David Montgomery as the lead guy carrying the load moving forward.

•   Bears assistants said a whole bunch of nice things about the newcomers they will soon get their hands on once training camp begins (around July 20th?). Kevin Fishbain of The Athletic rounded up some of the best quotes from Zoom conference calls with reporters last week. With running backs already on my mind, I found myself most intrigued by what RBs Coach Charles London had to say about Artavis Pierce and Napoleon Maxwell. And while I want to share some expanded thoughts on the position room later, I felt like I wanted to highlight Fishbain’s round-up because of the big-picture view of the new faces coming into Chicago this year. So clear some time to give it a read.

•   Sure, 2013 was a few seasons ago … but my goodness, Robert Quinn was outstanding that season:

•   The Bears have an estimated $10.8 million in available cap space, per OTC. So I suppose the team could still ring in another new face if push comes to shove at some point this summer. And while I have my doubts about that happening, Maurice Moton (Bleacher Report) has an idea of whom the Bears should bring in to add to the mix. Moton offers up Vinny Curry as someone who makes sense to bring into Chicago. Curry is a soon-to-be 32-year-old pass-rusher who still finds himself on the free-agent market. Curry picked up five sacks with the Eagles and has 29.5 sacks, 43 tackles-for-loss, and 82 QB hits over 112 games in his eight-year career. I believe there is no such thing as having too many pass-rushing options, but I’m not sure I see the perfect fit here. Even still … it’s not the worst idea.

•   For what it’s worth, I would be far more interested in Cordy Glenn. Because even though the free-agent tackle hasn’t played a full season since the start of the 2015 campaign, improving the depth by adding someone who could upgrade the swing tackle spot would make for a nice security blanket. However, Moton pictures Glenn as a nice fit for the Los Angeles Chargers.

•   Story time with Dan Pompei is always a treat, so you know his dive into the tag team of Dan Hampton and Steve McMichael will be worth your time:

The legend of the King and Ming, the twin pillars of the great Bears of the 1980s. https://t.co/SQ4W8RDv1k

•   The NFL’s management of facilities due to the COVID-19 pandemic is going to come into focus as the season approaches:

NFL is mandating that all 32 teams create “tiers” of access in each of their facilities to try to manage coronavirus, as outlined in a memo obtained by ESPN.https://t.co/aCrpi06R10

•   Meanwhile, Mike Florio (Pro Football Talk) serves up a reminder that college football’s challenges are quite different from its professional counterparts.

•   On the remix of Kanye West’s “Diamonds Are Forever” track, urban wordsmith Jay-Z once said “difficult takes a day, impossible takes a week.” So … get to it MLB & MLBPA:

•   Not sure if this is a one-day thing or a multi-day thing, but Amazon has a huge sale going on right now for clothes of all kinds (I will be hitting up the Adidas 30% off section). #ad