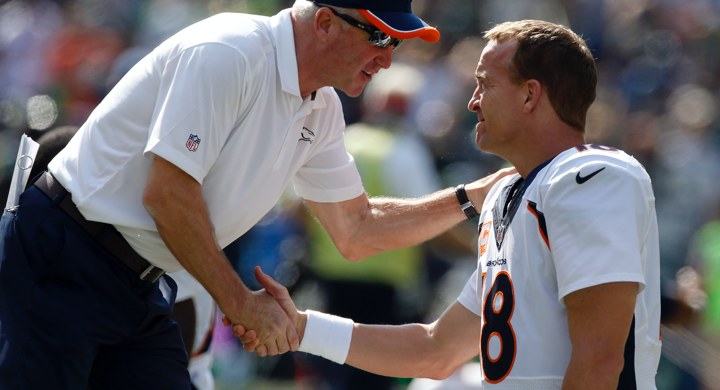 The oral history of Peyton Manning’s free agency adventure was written by The Athletic’s Nicki Jhabvala, Lindsay Jones, Mike Sando, Matt Barrows, and Jeff Duncan. And while none of the anecdotes in this entertaining read directly impact the Chicago Bears, I got a kick out of all the future ex-Bears who make an appearance.

Manning is the star of this piece. But there’s too much ex-Bears goodness not to share.

For example, John Fox, who was three seasons away from becoming the Bears’ head coach back in 2012, being a lead recruiter for the Broncos in the Manning sweepstakes is a bit of a hoot.

Long before he was the offensive coordinator responsible for one of Jay Cutler’s most effective seasons as Bears quarterback, Adam Gase was the Broncos’ QBs Coach. And at the time, Gase used relationships with Frank Reich and Clyde Christensen to figure out what Manning was looking for in a coaching staff. After all, Gase would have been the guy running the position room with Peyton Freaking Manning at the top of the depth chart.

The Titans also worked Manning out privately, with the plan to do so in Knoxville at Neyland Stadium where he played his college ball. In so doing, he linked up with future ex-Bears return specialist Marc Mariani. The meeting was quite the well-kept secret, according to Manning’s re-telling. Essentially, Mariani was picked up from the airport, given some cleats, and told he would not be informed where he was going and to tell his cell phone off. “He couldn’t call anybody. He couldn’t tell anybody what he was doing. It’s almost like they kidnapped him.”

So. Much. Ex. Bears. Flavor. Almost makes you wonder what would have happened to the Bears had things gone better with Fox in Denver. Who does Ryan Pace choose to coach the Bears in 2015? Is Danny Trevathan still a free agent Chicago targets? What happens to the Bears’ defense without Vic Fangio running the show? How does Jay Cutler’s career in Chicago wrap up without Gase? If you take some time to think about it, there are plenty of Bears storylines that get impacted thanks to Manning’s decision to sign with the Broncos.

The oral history also includes nuggets about how there was a belief that Manning might have chosen to play for Washington had the team not traded up in the 2012 NFL Draft to position themselves to take Robert Griffin III. That move essentially robbed us of seeing Peyton battle his brother Eli twice per season. There were anecdotes that included Jim Harbaugh, overzealous Miami fans, peanut butter and jelly sandwiches, other behind-the-scenes actions, and more.

You’ll want to give it a full read for yourself. Even then, you still might get the biggest kick out of John Fox being a successful lead recruiter.