If This is the Year a Non-QB Wins the MVP, My Money is on Khalil Mack Skip to content 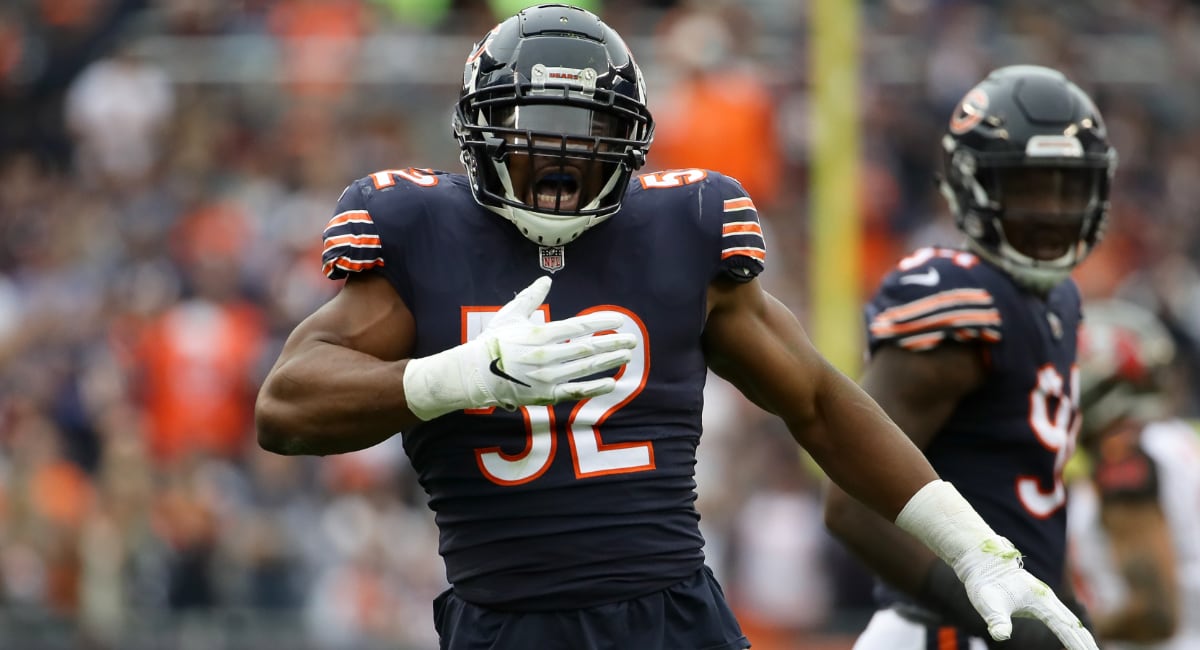 Quarterbacks have won the NFL’s MVP award in 12 of the last 13 years. And 1986 was the last time a defensive player won the league’s most prestigious individual honor. So to even suggest Khalil Mack as an MVP candidate in 2020 takes some real gumption. But that’s what Dan Hanzus did with his latest at NFL.com did. Well, kinda.

Rolling through each NFC team’s MVP, Hanzus selected Mack as the Bears most valuable player. And it certainly makes sense.

Mack is the Bears’ best and most accomplished performer. He is the face of the franchise at the moment and his arrival to Chicago helped open a window of contention starting in 2018. And while things didn’t go as planned last year, one of the only reasons why there’s even still a glimmer of hope in 2020 is because Mack is still employed by the Bears. Without him, our conversations regarding 2020 would be entirely different.

And let’s talk about 2019, because it wasn’t just bad for the Bears. Mack didn’t quite post his usual numbers, either. In fact, he didn’t even register a double-digit sack season,

With that said, his “down” year still featured 8.5 sacks, 5 forced fumbles, and 30 QB hurries (or, as Hanzus points out, just two fewer than Aaron Donald), suggesting that the noise around the “down” year was just that: noise. And for what it’s worth, Mack is in a much better position to succeed entering 2020. Should the Bears enter the season healthy, playing with a defense featuring Akiem Hicks and Roquan Smith in the front seven, along with the addition of Robert Quinn on the other side of the pass-rush equation, that should do wonders to free up Mack, given more one-on-one coverage – which he usually dominates.

And that means, we could be seeing more of this:

And a whole lotta this:

Who needs coffee when you have @NFL’s 10 best Khalil Mack highlights? pic.twitter.com/3aVAbN3G8J

So if that’s the case, why stop at team MVP? Let’s think bigger.

Four days ago, Stephen Campbell of Odds Shark ran down the latest NFL MVP odds. As expected, a flurry of quarterbacks are at the top. Christian McCaffrey (25/1), Ezekiel Elliott (28/1), Derrick Henry (50/1) are the first non-QBs to pop up as contenders. But a defensive player isn’t listed until we get into the 100/1 range with Aaron Donald (100/1). And if you poke around the web elsewhere, that’s where you’ll find Mack — also around 100/1 to win the MVP.

It’s a long shot, to be sure, but one we have discussed in the past. Like in 2018, when Mack arrived and got off to a torrid start. And in August 2019, when Mack’s peers voted him as the NFL’s third best player. More recently, Mack checked in at No. 9 on Pete Prisco’s list of the NFL’s best players at CBS Sports (ahead of perennial MVP candidate Aaron Rodgers, mind you). So maybe it’s not all that crazy of an idea to think Mack can win a league MVP award. Long shot? Yes. Impossible? Nah.

For the record, I wouldn’t bet the house on it. History shows that the MVP is a quarterback’s award unless someone puts together some peak-era Adrian Peterson stuff on their stat line in 2020. But part of me wants throw some change on a defensive player winning MVP on the off chance that this is the year.