Thinking, Dreaming, and Getting Pumped About Training Camp, and Other Bears Bullets Skip to content 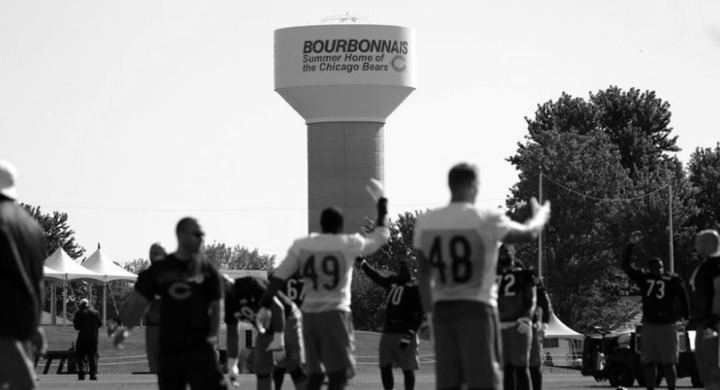 I re-discovered my love for 2000-08 era pop/punk/alternative rock last night. Listening to Fall Out Boy, Taking Back Sunday, Good Charlotte, Jimmy Eat World, and Blink-182 (among others) really took me back.

•   If things don’t go well on the baseball front, I suppose Jose Quintana could throw his hat in the ring and battle for the Bears’ QB1 gig:

Jose Quintana hanging with Tom Brady, who is 12 years older, and that is wild to me. Quintana is barely 12 years older than the Cubs' top draft pick this year, high schooler Ed Howard. pic.twitter.com/XVZSoVUPYe

•   OK, I’m just kidding. Or am I? In any case, NFL training camps are scheduled to open up in about a month. No one is quite sure what training camp will look like during the midst of a pandemic. And while the NFL is trying to keep things business as usual for the time being, I struggle to envision what that looks like in these times. What I do know is that – whenever camps open up – the Bears will have no shortage of storylines worth following. In short, the last thing the Bears want (or need) is for camp to start up, then get shut down. Or even worse, not get off the floor at all.

•   What happens at quarterback is front and center for obvious reasons. But Chicago will have new starters at tight end, wide receiver, cornerback, and safety this coming season. They could also have a new starter at right guard, which could ultimately impact the quarterback battle (assuming the Bears are able to get preseason games in under their belts this summer). So, yeah, the Bears need training camp. And the preseason.

•   UGH. Now I’m mad all over again about the Bears not having camp in Bourbonnais. The COVID-19 pandemic would’ve moved the Bears’ summer training to Halas Hall anyway. Nevertheless, with all the position battles that are set to take place in what amounts to poop-or-get-off-the-pot year for so many players and coaches, the vibe of a traditional camp would’ve been off the charts.

•   I don’t think people have forgotten this …

"People forget that two years ago with Mitch Trubisky as the starter, the Chicago Bears won 12 games. Let's not forget that. Mitch had a rough go of it last year, got a lot of blame."
– Chicago Bears QB coach John DeFilippo on @UnderratedHour

•   … because if they did, they wouldn’t be so upset about how things went down last year. Mitchell Trubisky was abetter quarterback in 2018 than he was in 2017. There is no doubt about that. But what happened in 2019 was a step back at the worst possible time. Wasting a prime year of peak performance defense because of inconsistent play at the most important position on the field drove Bears fans nuts last year. More importantly, it drove the team to bring in competition in an attempt to fix the position.

•   Also, I love the messaging from John DeFilippo throughout this offseason. Mixing in a reminder of the good times with some tough love can be a great educator.

Best defenses of the decade, per PFF WAR:

•   Oh, and don’t think the fact that Danny Trevathan played on both of the top two defenses is lost on me. That guy is a key cog in the middle of the defense. And while inside linebacker isn’t as important as it once was on the defensive hierarchy, do not dismiss its importance in the grand scheme of things.

•   Maaaaaan, I’m not trying to entertain this right now (even if I know it is a distinct possibility):

If the 2020 NFL season is cancelled, how would you spend the Fall?

5 cameras. 4 didn’t work after I spent an hour putting in batteries and sd cards. Tested them 3 times. So Cuddeback cameras you are fired. You off the mission. We got 1 photo. 1. Going to regroup for the 2nd time in the last 24 hrs. I need a coffee. Stay tuned.

•   This picture is soooo Chicago:

Jason Heyward just casually dropping the most perfect Chicago picture ever on his IG. pic.twitter.com/GQRipuS9xz