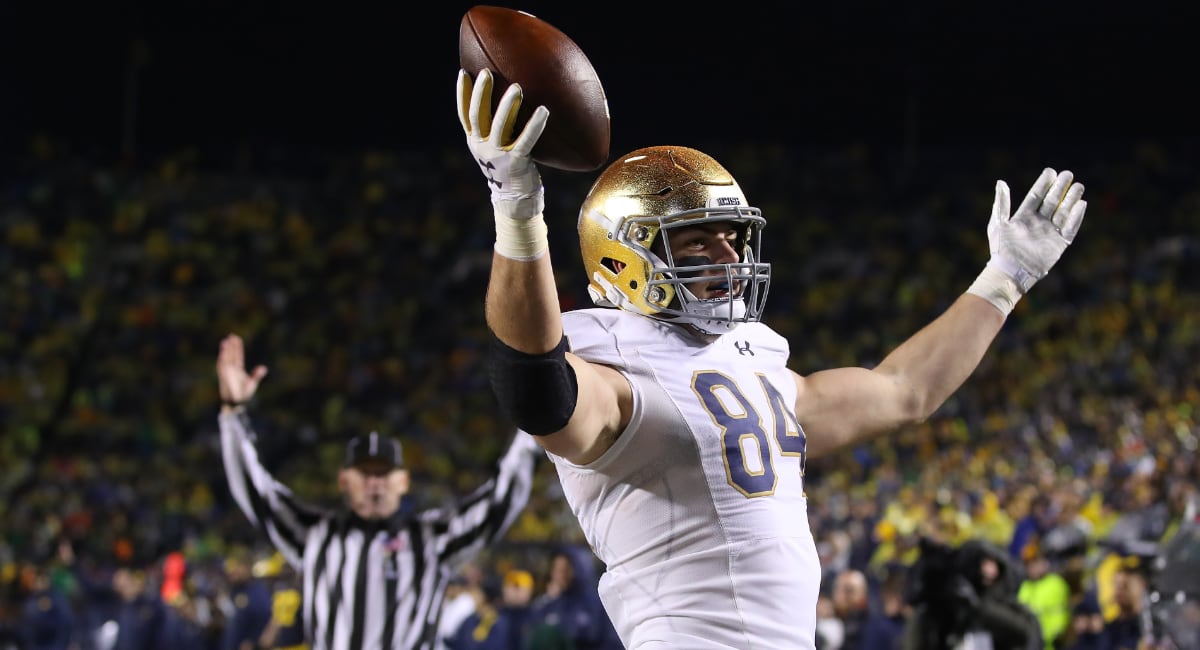 After watching my favorite movie about fighting and gaining independence, Star Wars: Return of the Jedi, I finally got around to watching Hamilton. It holds up on TV, to be sure. But it just isn’t as fulfilling as the two times I saw it live. There’s something about the theater the captivates me.

•   Our first look at Cole Kmet in a Bears uniform (and a behind-the-scenes look at how the Bears media team made it happen):

•   I’ve hit the end of the road when it comes to my groveling surrounding the pick of Kmet. No, the Bears probably didn’t get peak value with the 43rd pick. But they still selected a darn good prospect. Someone who was the top-rated tight end prospect in the eyes of several notable NFL Draft scouting eyes and also viewed as a potential first-round caliber pick. More importantly, Kmet could be the long-term solution the Bears have long been searching for at one of the most important skill positions on the field. Should Kmet live up to his potential, he certainly could be that (and possibly more). And if Kmet surpasses the lofty expectations in front of him, I’ll gladly eat some crow (fried hard, lemon pepper, mild sauce on it).

•   Some Kmet love from draft night:

•   There’s a part of my mind that tells me that getting a draft class’ best player at a position of need is a good thing. I’ll continue to re-visit that thought as we gear up for training camp at the end of the month.

•   Speaking of tight ends, some clarity regarding the David Njoku situation:

My understanding is TE David Njoku remains a big part of the #Browns plans, going back to the winter & the transition in the organization. The belief is Njoku can have a great year still for this team. But I'm also told by a source that Njoku, "been wanted out." Bears monitoring.

•   A reminder from Bleacher Report that Roquan Smith playing on his rookie deal is extremely valuable. Smith will play Year 3 of his first professional contract with a $5.1 million cap number. And as a point of comparison B/R underscores that Nick Kwiatkoski — who has never been a full-time starter — will wear a $7 million cap hit in his first year with the Raiders. Should Smith build upon his first two seasons, it won’t be long until he will demand a hefty contract extension. Because, as we have noted in this space before, this is a big year for the Georgia product.

•   The NFL’s 31 other fan bases aren’t concerned with the Bears from a rivalry perspective. According to a SB Nation poll of which teams fans see as their favorite squad’s biggest rivals, the Bears are far down on list. That’s fine with me. The Bears always seem to do better when they’re flying under the radar.

•   Paul Newberry (Associated Press) runs through some ideas for new team names for Washington’s NFL squad. My gut pulled me toward Washington Generals before Newberry offered up this possibility, if only because if there’s one NFL franchise whose on-field play and front office decisions were kin to being the Harlem Globetrotters’ personal doormats, it’s Washington’s squad. I wouldn’t mind if the team snagged Senators, as a nod to its former baseball franchise. Redtails could be good, too. How about the Washington Washingtons?

•   Elsewhere, Pro Football Talk’s Mike Florio reports all three of Daniel Snyder’s minority ownership partners are reportedly asking out from the franchise and trying to sell their shares. No matter how you slice it, this is probably not a good sign for Snyder. Is this like rats deserting a sinking ship? Or possibly a red flag that Snyder will play hardball and fight a name change that feels on the horizon? Maybe it’s a message from the minority partners that they don’t want to be associated with the franchise any more? In any case, it’s a big “yikes” from me.

•   I’m glad the Bears face this guy just once every four years instead of twice a year:

•   Fancy doorbells and and men’s grooming products (also fancy)are among the Deals of the Day at Amazon today. #ad

•   Something to listen to today:

The new play-by-play voice of the Bulls also has experience calling Bears games. @adamamin joins @JJStankevitz and @LaurenceWHolmes to discuss his dual roles going forward, the 2020 Bears and TECMO BOWL!

Here is the link to this week's podcast with a focus on the #bears https://t.co/Jl4DMbj6ZU