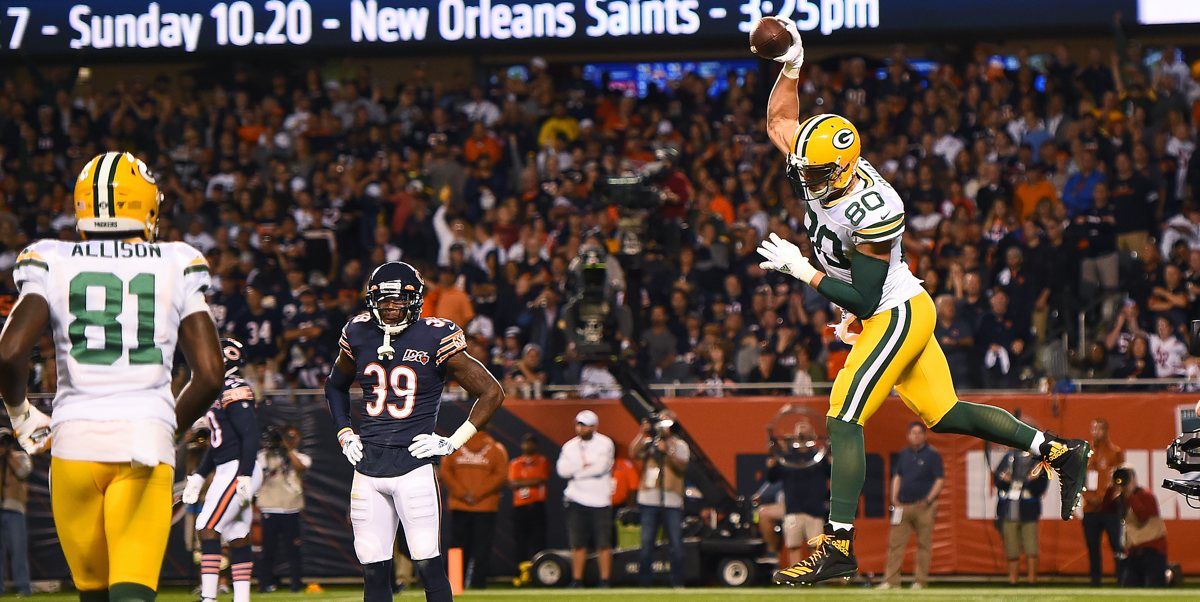 One of the guys in the tweet below is a proven top fantasy contributor and a Chicago Bear:

I don’t know if Jimmy Graham has another top-3 PPR fantasy finish in him, but I’d like to find out.

One way for the Bears to maximize Graham would be to get him more than the 18 targets he received in the red zone over the last two years in Green Bay. Just 18 targets in 32 games? It’s almost as if the Packers under-utilized someone who could have been an important asset in their offense.

Not that I would know anything about what that feels like ….

In thinking about how this would work, I’ve come to the conclusion that it shouldn’t be all that difficult. Seriously. Trey Burton was given 13 red-zone targets in 16 games during the 2018 season. He turned five of those chances into touchdowns. And that happened while Mitchell Trubisky was taking his first steps toward learning Matt Nagy’s offense. Of course, Chicago will need to reach the red zone more often than it did in 2019 in order for Graham to surpass that number. In 2019, the Bears’ 2.9 red-zone scoring attempts per game ranked 24th among 32 teams. Back-track to the prior year and Chicago’s 3.4 red-zone scoring attempts per game ranked tied for 10th with the Giants, Eagles, and Seahawks. Again, that shouldn’t be difficult if a minimal level of competence is reached by whomever is lined up at quarterback this coming season.

Football is a challenging game, to be sure. But it has its moments where it breaks down into something so simple. This is one of those moments. Get to the red zone. Score points (preferably touchdowns, but I suppose field goals will do from time-to-time). Win ball games. So let’s see how Graham figures into the equation.

Graham was given 24 targets in the red zone in 2017. Or, to put it differently, 42.1 percent of Graham’s total target share came inside-the-20. Of those targets, 16 came inside-the-10 — eight of those were hauled in for touchdowns. I’m no mathematician, nor am I a passing-game coordinator, or an offensive guru. HOWEVER, it seems like an ideal and logical plan would be to target Graham early and often in the red zone.

Seriously, that’s it. Maximizing a player’s strengths in an important facet of the game. That’s what’s at the heart of this post. Easier said than done? Sure. But not something totally unthinkable or impossible.

I imagine the Bears are going to want to justify their offseason show of affection for Graham. And while I don’t think he is the same player between the 20s as he was with New Orleans, it’s evident his value lies in being That Dude who gets targeted deep in opponents territory and makes the most of his 6-7, 265-pound frame. This doesn’t feel like a big ask, but it’s an important one for the Bears to realize as they re-tool their offense after last year’s stinker.

Getting into the red zone to allow Graham to make the most of what he’s working with will probably be the most difficult task for the 2020 Bears. It will take renewed efforts from a top-10 defense, better field positioning thanks in part to the special teams unit, and a consistent level of competence at quarterback that wasn’t shown last year. There are some moving parts here. But if the Bears can get them in sync, then they could put Graham in a position to have a renaissance season in his first season in Chicago. But if they can’t, then we’ll likely look at the contract the Bears gave him this past offseason the same way Packers fans look at the deal their front office handed him in 2018. And since the contract was a bit mind-boggling in the first place, my preference would be to not re-visit that again.