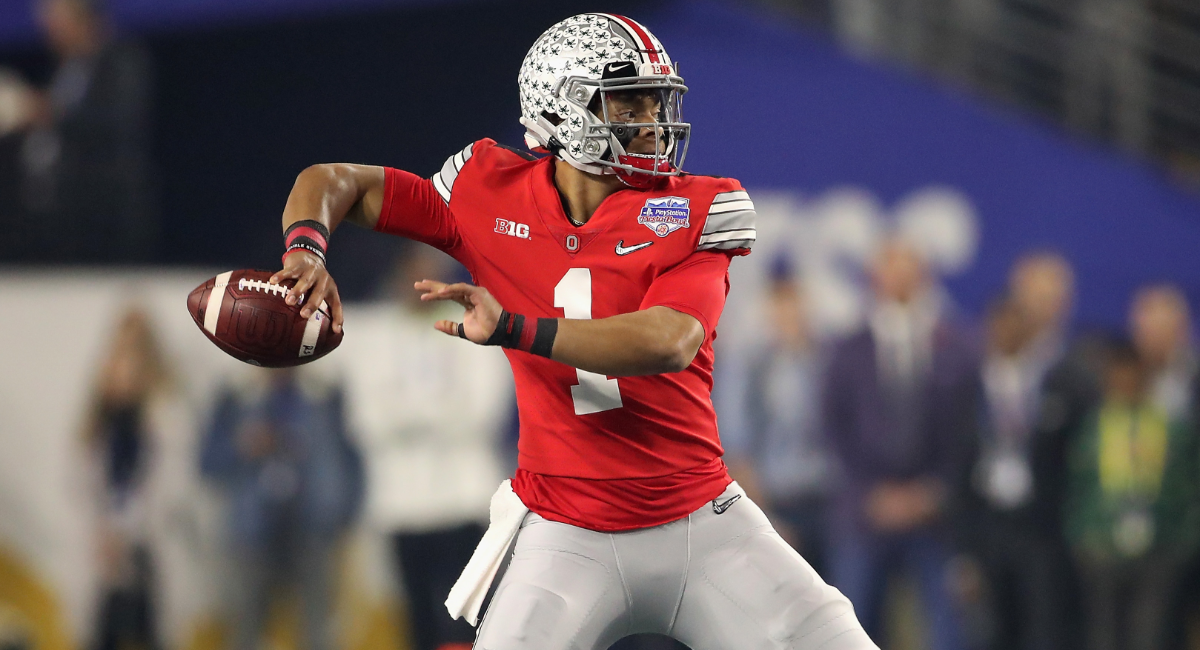 Last week I posed a question in an attempt to get the pulse of Chicago Bears fandom.

Which one of these is a future Bear?

You might have chuckled at the premise. Or you might have cried inside thinking about it. But in the end, I can’t help but come to the conclusion that the Bears’ QB of the future isn’t on this current roster. Heck, he might not even be in the NFL right now. In fact, there is a very good chance said quarterback is currently enrolled at a college or university right now.

Over at Windy City Gridiron, Jacob Infante predicts which quarterbacks will be considered among the 20 best in 2025. The post is a fun glance into what could be in store for the NFL at its most important position. What’s not fun is that no current Bears quarterbacks make the cut … or even the group of honorable mentions. Sorry, Mitchell Trubisky. You, too, Nick Foles. The Force simply isn’t strong with either of you.

With that out of the way, we can move onto what’s most interesting about this list — which is that there is a nice chunk of quarterbacks who could be drafted by the Bears in the coming years.

There are five quarterbacks who are still in college as of this post’s publishing. Three of them will be draft-eligible in 2021. Let’s discuss them, in brief.

Lawrence is Infante’s No. 2 ranked quarterback in 2025, which says a lot about where the Clemson standout forecasts to be early in his professional career. The only quarterback ahead of him on this list is that Patrick Mahomes fella, who will be just 29 five years from now. Have fun dealing with that, AFC West friends.

As for Lawrence, he is the odds-on favorite to be picked with the first overall pick in the 2021 NFL Draft. Lawrence has led the Tigers to two national championship game appearances, won one, has 66 passing touchdowns, added 10 more scores as a rusher, has thrown for more than 6,900 passing yards, owns a 5.5-to-1 TD-to-INT ratio, and is a Heisman Trophy favorite. And at 6-6 and 220 pounds, Lawrence is the prototype QB scouts and GMs drool over. Even if there isn’t a down of college football played this season, Lawrence figures to go off the board immediately.

Fields is the No. 8 QB on Infante’s 2025 NFL big board after an awesome year at Ohio State last year. He put up 41 touchdowns against just three interceptions, completing more than 67 percent of his passes, and throwing for more than 3,200 yards. I don’t have a feel of where Fields will go in the 2021 NFL Draft, but the general consensus is first-round lock and a good chance to be a top-5 pick.

I know there is going to be some trepidation when it comes to seeing a redshirt sophomore who plays at the Football Championship Subdivision level (a.k.a. Division I-AA) on this list. But I’ve seen Carson Wentz (and to a lesser extent, Joe Flacco) thrive in those settings, so we can’t rule it out completely. Lance put up video game numbers at NDSU last year, completing 66.9 percent of his passes, throwing for 28 touchdowns without issuing a single interception. He also added 1,110 rushing yards and 14 scores en route to leading the Bison to a national championship. Lance checks in as the No. 10 quarterback in 2025, which means we’re looking at the possibility of THREE of the best 10 quarterbacks five years from now as being part of this upcoming draft class.

That’s kinda neat. So much so, it makes me think the Bears should copycat what the Texans and Chiefs did in offering up a future first-round pick in order to land one of these three signal callers. Let’s be real, no one is talking about what K.C. or Houston gave up to land Mahomes and Watson right now.

This is one helluva projection to have Howell as QB11 in 2025 when he isn’t even draft eligible until 2022. Put aside that he went to Trubisky’s alma mater for a second. Howell smashed through the ACC as a true freshman, throwing 38 touchdowns against just seven interceptions. Mack Brown has something special brewing in Chapel Hill, and Howell is at the center of it all. By the time the 2022 draft rolls around, Howell has a good shot at being the top-rated QB in that class.

If not Howell, then Slovis might be the guy front offices are salivating over when the 2022 NFL Draft opens its doors. As a true freshman in USC, Slovis threw for more than 3,500 yards and 30 touchdowns. Slovis comes in as the predicted 15th-ranked NFL quarterback in 2025, which isn’t inconceivable if he continues on this path.

I look at the Bears, as currently constructed, as a team built to play with a quarterback on a rookie contract. Just look at the number of hefty salaries throughout the roster. Then look at them going into the 2021 season (numbers courtesy of OverTheCap.com):

To be clear, the cap can be played with, manipulated, and twisted into a place where things open up and look better for the Bears. But still … That’s eight players with cap numbers north of $10 million. Feels like a lot. And that doesn’t include Cody Whitehair ($9.6M) or Bobby Massie ($9.3M) who miss the cut by a few hundred-thousand dollars. But if you were to throw them into the mix, then we’re talking about $136.696 million worth of cap hits for the 2021 squad — and we haven’t even factored in an Allen Robinson extension.

The way I see it, the Bears declared how they felt about Mitchell Trubisky’s long-term future as QB1 with how they addressed this past offseason by handing out sizable deals to Robert Quinn and Jimmy Graham. Their moves bring into focus the inescapable truth that a competitive Bears roster moving forward will be one with a high functioning quarterback on a rookie-scale deal. Someone who can buy them time and maximize the window made available by the current veterans on this roster.

Down the line, there might come a day to build around one of the quarterbacks listed above with players at other skill positions who will be on rookie contracts. But that’s only if he is deemed worthy of that contract. If not, then this cycle will be repeated until the Bears find a franchise quarterback of their own. Until then, we deal with our current reality in following the great QB derby of 2020 featuring a 2017 first-round pick who has yet to live up to his potential and his veteran counterpart who has quite the résumé when the lights shine the brightest.