Mostert Asks Out, Ivy League Backs Out, Cam's Health Checks Out, and Other Bears Bullets Skip to content 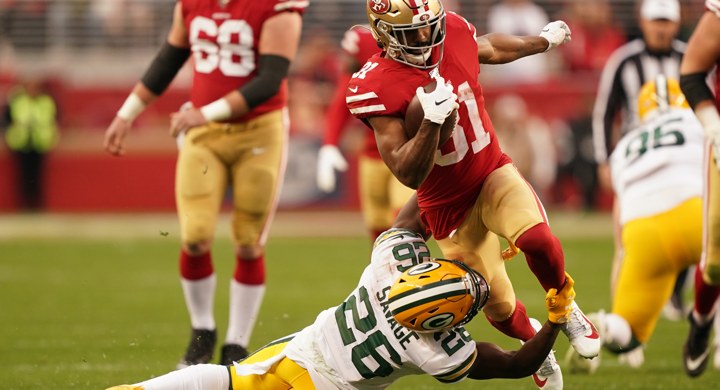 I think I died and went to shoe heaven yesterday …

If you could see the smile on my face… pic.twitter.com/dV3Xe7Q4ka

… and then I woke up in the hell of not knowing where I put my glasses before I went to bed. Thankfully, I know where I put my back-up pair (Michael: Lu … those shoes are HOT).

•   Raheem Mostert — an ex-Bear who torched the Packers to the tune of 220 rushing yards and 4 touchdowns in the NFC Championship Game last January — wants out of San Francisco. Mostert’s agent tweeted his client’s trade request on Wednesday afternoon. The ask from Mostert’s end comes after the two sides were engaged in talks regarding getting Mostert’s contract in line with the top backs on his team. Last season, Mostert racked up a career-best 952 scrimmage yards and scored 10 touchdowns. So, yeah, I can see why he would request a little boost to his 2020 base salary of $2.575 million. I bet he would like to get in line with Tevin Coleman, whose base deal pays him $4.550 million this season.

•   On an alternate timeline, I’d be intrigued by the idea of Chicago acquiring Mostert. Teaming him with David Montgomery would make for a neat 1-2 tandem in the running game, with Tarik Cohen sliding back into the role of gadget back. But I can’t imagine the Bears trading future considerations to give a running back a pay raise just one one year after trading Jordan Howard away to save a few million in cap space and gain a 2020 draft pick. I’m not saying Mostert isn’t a fit. It’s just that robbing Peter to pay Paul (and give him a little salary upgrade, too) doesn’t make much sense. But hey, the dude showed he can ball last year. And it’s not like the Bears couldn’t use an upgrade at the position. Hmm …

•   Rather than trade tangible things to get a running back to round out the room, why not browse through the free agent wire? Some notable running backs who might pique the Bears’ interest include include Devonta Freeman (two-time Pro Bowler), Lamar Miller (two-time 1,000-yard rusher, 2018 Pro Bowler), and Spencer Ware (ran for 921 yards with the Chiefs in 2016). LeSean McCoy (six-time Pro Bowler, two-time first-team All-Pro) is available, too. As is Mike Weber, who you might remember as one of the running backs who paid an official visit to the Bears ahead of the 2019 NFL Draft.

•   The Ivy League was ahead of the curve in March when it canceled basketball conference tournaments. Fast forward to July where the league is taking another bold step:

•   I doubt power conferences at the FBS level are going to rush to follow what the Ivy League has done here. But at least someone has set out a blueprint to follow should they decide to do so.

•   Speaking of college football, Jim Harbaugh says he was close to signing a contract extension with Michigan before the COVID-19 pandemic hit. Harbaugh is 47-15 in five years at his alma mater, but is winless in five games against Ohio State. Maybe he should beat the Buckeyes once before clamoring for a new deal.

A full breakdown of Cam Newton’s contract with the Patriots, which includes $3.75M in playing-time incentives and a maximum value of $7.5M if the team wins the Super Bowl. pic.twitter.com/TGSVEJ3P0Z

•   Let’s put it in a local perspective: If the Bears were to copycat the Ravens idea and have capacity at less than 20 percent, Soldier Field would host an estimated 12,115 people.

•   A member of the Bears family has passed away:

We are deeply saddened by the loss of former Bears tight end and receiver Earl Thomas. Our hearts go out to his family, friends & loved ones.

•   Earl Thomas was selected in the sixth round (135th overall) of the 1971 NFL Draft. The University of Houston product played three years with the Bears, collecting 47 catches, gaining 748 receiving yards, and scoring seven touchdowns in 39 games while at the tight end position. He went on to play 25 games over two years in St. Louis and another seven games for Houston to close out his career.

•   Julian Edelman reaching out to Desean Jackson (days after Jackson’s anti-Semitic comments) is bold and admirable:

•   For the runners among you:

Gear up, run the @PNCBank Virtual #Bears5K and join us for a Post-Race Party hosted by @spiceadams & @chicago_gabe this Sunday. We've got giveaways & special appearances by DJ @jayilla, @TheRealStaley and Coach Nagy!

•   If you’re going to wear a mask, why not do so while repping your favorite team: