"Meet the Rookies" Trailer Drop, Montgomery's Bounce-Back Potential, Did You Forget About Mack? And Other Bears Bullets Skip to content 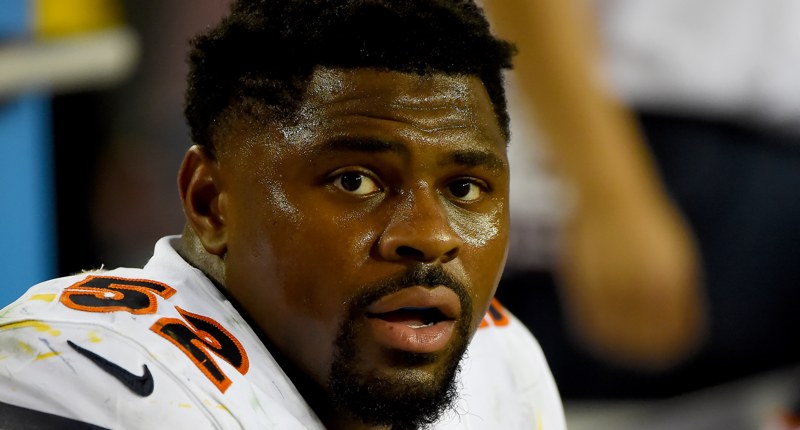 I am in an intense 12-team fantasy baseball league. And because of the curveballs thrown by COVID-19, it wasn’t until mid-July when we finalized rosters with a FAAB waiver wire bidding frenzy. Because we bumped our keeper number up from 20 to 25, I decided to load up on prospects I thought were worth stashing. So in addition to pitchers Nate Pearson (8th ranked prospect overall at MLB.com) and Spencer Howard (34th), I added shortstop Jazz Chisholm (#66), pitcher Brailyn Marquez (#68), outfielder Brennen Davis (#78), pitcher Shane Baz (#90), and pitcher Simeon Woods Richardson (#98)

Having seven top-100 prospects is nice, but the conclusion of the draft made me wish fantasy football was starting up.

•   I’ve been looking forward to this:

•   The Chicago Bears’ “Meet the Rookies” series on YouTube is one of the most well-done things on the internet. It gives us a glimpse at the newest members of the Bears, and often provides things we didn’t know about these upstart prospects. Watching the teaser trailer has me pumped for football.

•   In case you’ve taken the last few months away from paying attention to the Bears’ rookie class, I’ll provide a quick synopsis of what you missed. They drafted Notre Dame tight end Cole Kmet with the first of their two second-round picks. Kmet was the highest-ranked player at his position by a slew of draft gurus. With their other second-rounder, they drafted Utah cornerback Jaylon Johnson. There were plenty of mock drafts that had Johnson as a first-round talent, so this could be Chicago’s best value pick. The Bears had a trio of fifth-round picks: Tulsa pass-rusher Trevis Gipson (who idolizes Von Miller), Georgia Southern cornerback Kindle Vildor, and Tulane receiver Darnell Mooney (he’s fast!). And after much hand-wringing over not taking an offensive linemen earlier, Chicago selected a pair of projects for the position room by picking Colorado’s Arlington Hambright and Tennessee State’s Lachavious Hamilton. Getting to know these guys on another level should be a treat.

•   Over at the Bleacher Report app, Jaylon Johnson will be doing an AMA at 1 p.m. CT on Wednesday. If you have questions (no personal favors, obviously) for the Bears rookie, line ’em up!

I wanna see more of this from David Montgomery in 2020. pic.twitter.com/rGEQJfqKxh

•   … but I also thought I’d see more play calls and designs like the one embedded above. The rubber didn’t meet the road when it came to the upside and potential showing itself on the field last year. Chicago’s offense had too many skill players whose potential went unmet last season for a great many reasons. But given a clean slate, some new faces on the coaching staff, a few newcomers in the huddle, and the motivation to prove 2019 was an anomaly, I’m curious to see how this coming season unfolds.

Highest-graded WRs on contested targets in 2019:

•   If you had your heart set on the Bears nabbing Jason Peters, here’s some news that’s going to disappoint you:

Jason Peters gets a one-year deal worth up to $6 million, with $3 million in guarantees to go back to the #Eagles as a guard.

•   I couldn’t envision Peters – a nine-time Pro Bowler, two-time first-team All-Pro, and an all-time Eagles great – playing anywhere other than Philadelphia in 2020. So with that in mind, I never saw a fit with him and the Bears, even if there were connections to Matt Nagy and Juan Castillo. Although, I will say that part of me wishes Chicago would have publicly kicked the tires on Peters if they knew he was willing (or better yet, able) to move to guard. The transition from tackle to guard is a natural one because the tasks can be a bit easier inside the phone booth between a tackle and center when compared to being on an island as a tackle. Then again, interior pass-rushers are evolving and getting better, so it’s not as if there is an “easy” spot on the line.

•   Gaming gear, toys, rice cookers, dog treats, and more are your Deals of the Day at Amazon. #ad

•   This looks right to me for every state … except Illinois:

What is the most popular team in each state? pic.twitter.com/7klnoa4qPc

•   NFL Network insider Ian Rapoport tweets the Lions signed cornerback Jeff Okudah to his rookie contract. It’s a four-year deal with a fifth-year option for the Ohio State standout who was the third overall pick in the draft. Okudah immediately becomes the best member of Detroit’s secondary upon arrival.

•   An old friend found himself a soft landing for his post-playing days:

NEWS: Greg Olsen has signed with Fox Sports to be its No. 2 NFL game analyst after he retires, The Post has learned.https://t.co/OUXauK3u8y

•   Did Khalil Mack retire and not tell anyone?

Who is the best pass-rusher in the NFL? pic.twitter.com/QNXyPzRbZ8

Chiefs and Texans rookies are scheduled to report to camp Saturday. All players must take COVID-19 tests 48 hours in advance. Yet there has been no clearance yet from the NFL and both teams, like the 30 others, are awaiting word from the league about how to proceed, per sources.

•   Some perspective regarding Washington’s name change from ESPN’s Michael Wilson, who has spent a large chunk of his career living and working in the D.C. area:

There never was enough civic outrage over Washington's team name, but the potential loss of hundreds of millions of dollars seems to be what Dan Snyder finds most offensive (via @OTLonESPN) pic.twitter.com/WXDuFybzSl

•   My sincerest “thank yous” go out to all of you who reached out yesterday. To those of you who have been here since Day 1, you rock. You guys and gals are a big part of the reason this thing chugs along. To those of you who are new, you are awesome, too. You folks help keep the train going in the right direction. This community we have is special, and I enjoy it very much. So thanks again for reading, commenting, sharing, re-tweeting, and for all the other stuff you do. Let’s keep the good times going.