Derrick Henry Got Paid ... Just Before "The Year of the Running Back" Kicks In Skip to content 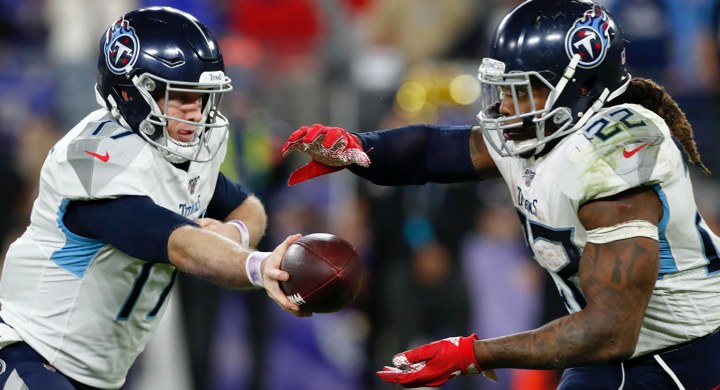 The 2019 NFL rushing king can settle in his Nashville throne for the next few years without having to worry about a multi-year deal.

In one off-season, the Titans keep both Henry and Ryan Tannehill on long-term deals.

Derrick Henry and the Tennessee Titans agreed on a four-year contract worth up to $50 million and includes $25.5 million in guarantees. The deal came in before the 4 p.m. deadline Wednesday for Franchise tagged players to sign multi-year deals. Had the two sides not come through to beat the buzzer, Henry would have played on the tag and made $10.278 million.

The extension accomplishes a couple of things. First, it rewards Henry for his efforts in leading the Titans backfield. Secondly, the new deal allows the Titans to run it back with Henry and quarterback Ryan Tannehill after that duo led the team to the AFC Championship Game (a contest in which the Titans owned a 10-point lead at one point, might I add). And it means one of the Bears’ opponents in 2020 will start the year with its offensive stars in tow.

Most importantly, perhaps, is that Henry gets his cash ahead of the 2021 offseason. That might not be a big deal to some, however, it probably was significant for Henry. Because, if you take a look at what’s coming down the pipeline, you’ll understand why I referenced 2021 as The Year of the Running Back in this post’s title:

The 2020 NFL Draft? Yeah, that group has some ballers. Travis Etienne passed on entering the 2020 draft to run it back at Clemson. Chuba Hubbard is the Oklahoma State standout who’s on the Doak Walker Award watch list and made headlines after holding Head Coach Mike Gundy accountable as he asserted himself in college football’s players rights movement.

Free agency? Stacked. Dalvin Cook is a Pro Bowler. So is Aaron Jones. Alvin Kamara is a do-it-all back who also is an impact player as a return specialist. Todd Gurley was football’s best back as recently as the 2018 season. However, the Rams cut him earlier in the offseason, which led him to sign with the Falcons. Leonard Fournette carried the Jaguars to the AFC title game a few years ago. And then there’s Tarik Cohen, the gadget back who was one of the NFL’s most electric playmakers in 2018.

If I was in Henry’s shoes, seeing that collection of talent would be enough for me to push for a contract extension that guarantees me a chunk of money now and locks me into a starting role while still in my prime.