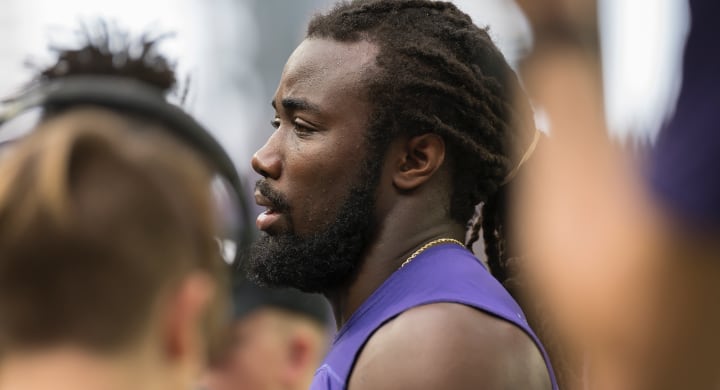 Earlier in the offseason, word surfaced that Vikings running back Dalvin Cook wasn’t showing up for team activities until he received a “reasonable extension” from the team.

And at the time, it wasn’t that much of a concern. After all, Cook was missing virtual team meetings that replaced OTAs throughout the league. But now that we’re in late July and camps are opening in two days , Cook still hasn’t received the contract extension ofer he desires. Thus, questions regarding Cook’s status for training camp are popping up again.

For a moment, Head Coach Mike Zimmer relayed a message of hope:

. @Vikings RB Dalvin Cook is expected to report to camp next week, per HC Mike Zimmer. When Zimmer was asked: “I was told he would be.” By whom?: “By him.” @nflnetwork

Some clarity: #Vikings RB Dalvin Cook told RBs coach Kennedy Polamalu he plans to report to training camp, per source. Polamalu relayed that to coach Mike Zimmer, who has texted with Cook tonight to straighten things out.

Zimmer said Cook told him he was showing up for camp next week. Meanwhile, Tom Pelissero tweets that Vikings Running Backs Coach Kennedy Polamalu told Zimmer that Cook is expected to show up to camp on time. But that’s not where the story ends.

That’s because Cook’s agent, Zac Hiller, disputes that conversation between the player and his position coach happened:

More from Zac Hiller: “Dalvin and Coach Polamalu speak often as they have a great relationship. Dalvin has never mentioned to him anything in regards to reporting to camp. I’m not sure where the miscommunication is. I hope Dalvin plays a major role in the Vikings future success.” https://t.co/VfTSMS8x3j

Not only does Hiller refutes that Cook and Zimmer talked about reporting to camp, he zings the Vikings for getting an extension done with the coach and not his client. Well played, sir!

To re-iterate: Dalvin Cook’s head coach and position coach expect him to show up for camp on time. That is, unless Cook doesn’t show up on time because the conversations that confirmed his on-time arrival didn’t happen. So Cook is either showing up for camp on time … or he isn’t.

Cook is an important piece of Minnesota’s offense. He racked up 250 carries, gained 1,135 rushing yards, and scored 13 touchdowns en route to his first Pro Bowl appearance. Cook is entering the final year of his rookie deal. And as the most valuable player on the Vikings offense, he feels entitled to a pay raise. And until the Vikings meet his demands, Cook is ready to sit out. Frankly, I’m sure Bears, Packers, and Lions defenders are watching this situation with great interest and probably hope he stands his ground.